One of the joys of examining the lives of the saints is observing how their lives take twists and turns that lead them to the places they are ultimately called to serve. This is the case with both Brother Lawrence, whose life was forever transformed through his experience as a soldier, and Patrick, whose early years as a slave in a foreign country changed the trajectory of his life. Through simple faith and legendary acts, the lives of these two faithful servants of Jesus begin to shine through. And yet, only one will advance to the Saintly Sixteen.

Yesterday, in the biggest margin of victory of Lent Madness 2020 to date, Joseph trounced Joshua 73% to 27% to advance to the Saintly Sixteen, where he'll face the Biblical Elizabeth. None of this gets easier as we move ever closer to the awarding of the Golden Halo. 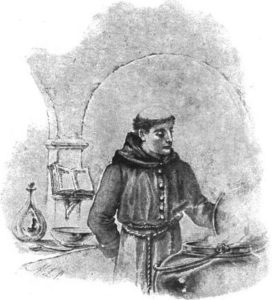 Brother Lawrence understands troubling times. Born into poverty in Lorraine, France, around 1614 as Nicholas Herman, he joined the Army during the Thirty Years War in search of regular food and sustenance. Unfortunately, he was spiritually and physically injured by the violence of the battle. It is said that Nicholas first experienced God while staring at a dormant tree in the middle of winter. In that moment, Nicholas realized that God was present and working even in things that appeared to be dead—himself included. His contemplation reawakened his spirit, and Nicholas realized that if God could work in that tree, then God could also work within him and in much of the mundane life around him. Thus, began a journey where Brother Lawrence found God in the simplest of things.

Following his injury, Nicholas joined an upper-class household to serve as a footman. Crippled and awkward, Nicholas reported that he was a clumsy servant, ill-suited to carrying things he was most likely to break. He yearned to be a part of a community in which he could contemplate God. Consequently, he joined the Discalced Carmelite Priory in Paris where he took the name of Brother Lawrence. There he continued to serve others and was often found in the scullery, cooking and doing dishes. During this time, he began to develop his maxims for mundane living, providing the foundation for his book, The Practice of the Presence of God. Brother Lawrence’s book teaches us that even the small things in life are opportunities to pay homage to our Maker.

Brother Lawrence’s contemporaries report that he had an unworldly knack for marrying activity and contemplation. It is said that toward the end of his life, Brother Lawrence achieved living as though it were only God and himself and all his activities solely focused on God.

Brother Lawrence calls us to find God in our chores, our routines, our moments of anger and frustration. Brother Lawrence knows the pain of mental and physical injury and that God is working in the boring, the painful, and the moments we wish we could rush through. Brother Lawrence calls each of us to be fully present with God in every moment, not just those we consider as spiritual. His feast day is January 11.

Collect for Brother Lawrence
Heavenly God, we give thanks for the life and teachings of Brother Lawrence who through his actions, deeds, and words has taught us to believe in and concentrate on God’s continual attention to us that through our growing awareness of God in all things that we may come to realize our dependence on God’s very personal and continuous presence. Amen. 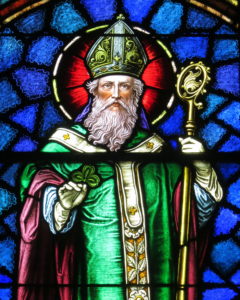 As a sixteen-year-old, Patrick herded sheep. He kept guard as the lambs gnawed clover from the field. Patrick took care of a lot of animals, watching for sickness, cleaning out muck, and gathering in wanderers. With all of that work, his forearms were more muscular than a few months before. He had outgrown his boyhood’s lanky frame and expanded into the body of a man.

Patrick changed in other ways as well. His heart pierced as he thought of his family and birthplace. Out in that space, Patrick felt the acute loss of all he loved. He could not escape the ache of his homesickness, and with no one else to turn to, he began to pray. A few months earlier, bandits had captured Patrick and stolen him from his home in Roman Britain. They had moved him to Ireland, where he became a slave. In his desperate captivity, without the distractions of friends or family, he began to rely on God. Patrick converted to Christianity, and his faith grew deep through his trials.

Six grueling years later, Patrick dreamed that a ship was ready for him. He escaped from his captors and returned home. While Patrick was in Britain, he continued to study Christianity and became a priest. Then Patrick had another dream. Someone delivered a letter to him with the heading, “The Voice of the Irish.” In it, the people of Ireland begged him to walk among them again. He felt deeply moved, but he also had nagging doubts about responding to the call. He didn’t have as much education as he wanted.

Though Patrick was not initially welcome in Ireland, he eventually settled in a place where his ministry flourished. He became a bishop, baptizing thousands of people and ordaining priests who started new churches. He encouraged wealthy women to become nuns and ministered to the royalty. His legends include driving snakes out of Ireland and raising thirty-three people from the dead.

Today, festivities abound in his honor on St. Patrick’s Day. In memory of the patron saint of Ireland, exuberant people parade and green beer flows. The most pervasive emblem harkens back to those grazing sheep. People pin clover to their chests, recalling how Patrick plucked the three-leafed plant from the field in order to illustrate the Trinity.

Collect for Patrick
Almighty God, in your providence you chose your servant Patrick to be the apostle to the Irish people, to bring those who were wandering in darkness and error to the true light and knowledge of you: Grant us so to walk in that way that we may come at last to the light of everlasting life; through Jesus Christ our Lord, who lives and reigns with you and the Holy Spirit, one God, for ever and ever. Amen.

196 comments on “Brother Lawrence vs. Patrick”