Yesterday Elizabeth the New Martyr defeated Gregory of Nazianzus 58% to 42% to advance to the next round where she'll face Hildegard of Bingen. Yes, folks, that means that three, count 'em, three Elizabeths will advance to the Saintly Sixteen.

So read, vote, and then get back to mindlessly either watching TV or scrolling through Facebook. 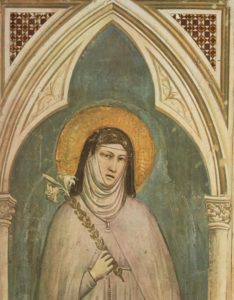 Saint Clare of Assisi often is overshadowed by her contemporary, Saint Francis of Assisi arguably the best known of all the saints in the Roman Catholic Church. Clare even referred to herself as “the little plant” of Francis.

But Clare is more than just the first female follower of Francis, more than just his most dedicated disciple. She developed her own interpretation of the Franciscan life, founded the Order of Poor Ladies (known today as Poor Clares), and became the first woman to write a Rule of Life for a monastic order. Not one to back down from her ideals, she reportedly commanded miracles both before and after her death and, perhaps most miraculously, commanded the attention of the poor and powerful, men and women alike.

Chiara, or Clare, Offreduccio was born in 1194 to a noble family of Assisi, a small town in Italy’s scenic Umbrian valley. Official biographies written at the time of her death and canonization describe her as beautiful but they also hint at her strength and holy rebelliousness. At eighteen, she ran away from home to commit herself to Francis’s way of religious life, allowing the friar to cut off her golden curls and consecrate her to the Lord.

Clare became abbess of the monastery at San Damiano. Clare’s relationship with Francis was one of respect and friendship. She influenced, deepened, and supported Francis’s beliefs, including inspiring him to write his famous “Canticle of the Creatures.” She lived for twenty-seven years after Francis died in 1226, continuing to interpret and exemplify to others Francis’s teachings as well as promoting and supporting the growth of her order.

Clare went toe-to-toe with popes to preserve the way of life she wanted for her sisters, which included both the pursuit of radical poverty and their inclusion in the Franciscan order. That wish was granted when, two days before she died, she received a copy of the Rule of Life she had written bearing the papal seal. Within two years, Clare was declared a saint. And seven centuries later, the seeds scattered by “the little plant” of Francis continue to grow, with more than 20,000 Poor Clares in seventy-six countries. Clare is remembered on the feast day of August 11.

Collect for Clare
O God, whose blessed Son became poor that we, through his poverty, might become rich: Deliver us from an inordinate love of this world, that we, inspired by the devotion of your servant Clare, might serve you with singleness of heart and attain to the riches of the age to come; through Jesus Christ our Lord, who lives and reigns with you and the Holy Spirit, one God, for ever and ever. Amen. 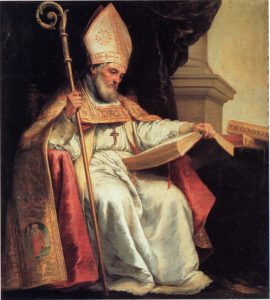 Imagine living in a world where institutions of learning were crumbling and the opinions of experts were ignored as people turned instead to the voices of the powerful. Such was the time of Isidore of Seville (560-636 ce). Born in Spain, Isidore grew up on the edge of the Roman Empire, on the Iberian Peninsula. He was educated at the Cathedral School of Seville, the only institution of its sort in the area.

Isidore worked alongside his brother Leander in teaching about and converting the Visigoths, who had adopted an Arian form of Christianity, to the Roman form of Christianity. Isidore succeeded him as the bishop of Seville. He immediately set to two tasks: preserving the monasteries, which functioned as repositories of wisdom and strengthening education throughout the region.

As bishop, Isidore was able to hold together the two peoples of the Iberian Peninsula: the Visigoths and the Romans. And his work in providing educational opportunities undoubtedly had a huge impact. Yet neither of these are why Isidore is remembered.

Late in his life, Isidore undertook the work of writing a book—but not just any book. Etymologiae (Etymologies) was intended to be a compendium of all human knowledge. In Etymologies Isidore summarized some of the most essential knowledge and wisdoms of those who came before him. This was the first work of this sort, an encyclopedia to gather together what had come before. By certain measures, Etymologies was a resounding success. The work of countless classical authors is known to us only from Isidore’s summaries. (Imagine if someone had written a Cliff Notes version of all the works lost in the Alexandrian Library!). His encyclopedia was used as a textbook in Europe for around nine hundred years!

For this herculean work of preserving and passing on knowledge, Isidore was only the twelfth person to be declared a Doctor of the Church. In 1997, Pope John Paul II suggested that Isidore and his quest to collect knowledge would be a natural fit as the patron saint of the internet. As the “last scholar of the ancient world” and the “schoolmaster of the middle ages,” Isidore provides a bridge carrying wisdom forward from the ancient world into ours.

Collect for Isidore
O God, by your Holy Spirit you give to some the word of wisdom, to others the word of knowledge, and to others the word of faith: We praise your Name for the gifts of grace manifested in your servant Isidore, and we pray that your Church may never be destitute of such gifts; through Jesus Christ our Lord, who with you and the Holy Spirit lives and reigns, one God, for ever and ever. Amen.

178 comments on “Clare of Assisi vs. Isidore of Seville”