Elizabeth of Hungary vs. Herman of Alaska

A Tuesday during Lent, can mean only one thing: time to cast a vote in Lent Madness! But first, some results. Yesterday, Eva Lee Matthews soundly defeated Hervé (and his little dog too!) 61% to 39%.

Today, the second of the four Elizabeths in the 2020 bracket makes an appearance, as Elizabeth of Hungary takes on Herman of Alaska. Will this 13th century Hungarian royal with the generous heart prevail? Or will it be the Russian-born 18th century missionary monk? Two compelling saints but, alas, only one will move on to the Saintly Sixteen.

In case you missed yesterday globe-trotting edition of Monday Madness (and if you did...for shame!), you can watch it here. In it, we gave a shout out to the good people of St. Stephen's in Terra Haute, IN, who have embraced Lent Madness with reckless abandon. Read an article in the local paper about their foray into the Saintly Smackdown, led by their pastor, the Rev. Drew Downs.

And if you have compelling stories or photos to share from your own context, please do send them our way. Now go vote! 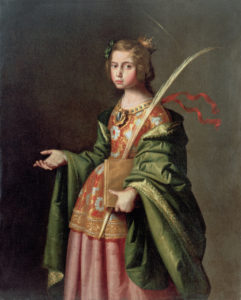 Elizabeth of Hungary did not live long—she died at the age of 24 in 1231—but she left a powerful and lasting impression during her short life.

Elizabeth was born into the royal family of Hungary and promised in marriage to Ludwig IV, Landgrave of Thuringia, to cement a political alliance between the two noble families. Once she reached the age of fourteen, the two were married.

Two years later, Elizabeth heard the teachings of the Franciscan community. She was deeply moved by the Franciscan ideals and almost immediately began to put them into practice in her own life. She became known for dressing simply despite her royal station and for regularly baking bread in her estate and then distributing it to the local community.

Some in the royal entourage became suspicious of Elizabeth’s activities and accused her of stealing goods from the royal household. Legend says that on one day, Ludwig and his hunting party encountered Elizabeth. She had hidden bread in the folds of her dress to be handed out to those in need; Ludwig saw an opportunity to clear her name so he asked her to show what she was carrying. When she opened her arms, the bread was gone and instead her cloak was full of white and red roses—proof to Ludwig that she was doing God’s work.

When Elizabeth was twenty years old, tragedy struck when her husband died en route to the crusades. Given her relative youth, Elizabeth’s family was ready to match her in another marriage for political gain. Instead of the welltrod path of being used as a political pawn, Elizabeth took vows of celibacy and obedience to her confessor. She joined the Third Order of Saint Francis and used the funds intended for her dowry to build a hospital dedicated to Francis.

When Elizabeth died at the age of twenty-four, miracles were almost immediately attributed to her at her grave.

Elizabeth was so highly revered that she was officially declared to be a saint just four short years after her death, an acknowledgement of her tireless generosity toward the poor and ill. She is considered a patron to the Third Order of Franciscans, widows, exiles, and people experiencing homelessness.

Collect for Elizabeth of Hungary
Almighty God, by your grace your servant Elizabeth of Hungary recognized and honored Jesus in the poor of this world: Grant that we, following her example, may with love and gladness serve those in any need or trouble, in the name and for the sake of Jesus Christ; who lives and reigns with you and the Holy Spirit, one God, for ever and ever. Amen. 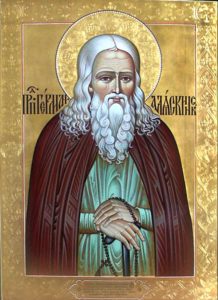 Herman of Alaska was known for his Christian compassion, leadership, humility, personal warmth, and deep kindness. Although his birth name and details of his childhood are lost to history, Herman was born in the 1750s near Moscow.

Never ordained, Herman—his monastic name—joined a hermitage near St. Petersburg at sixteen years old and then transferred to Valaam Monastery to study with Abbot Nasarios. After taking vows, he happily lived the life of a hermit until he was called to join others for missionary work in Alaska, at that time owned by Russia. The area was a thriving trading post for sea life, animal pelts, and crops. In 1794, the missionaries established their base on Spruce Island, near the village of Kodiak. Herman chose to live a spartan life, sleeping on hardwood boards and eating little.

Herman was good to the native people, something his fellow Russians were not. He was shocked and saddened to witness the abuse of the Aleuts, the Native Americans living in the area, by the Russians and Europeans. Herman defended the rights of the Aleuts against many, including his own government.

Despite the hardships of low supplies and harsh weather, Herman and his monastic group preached the gospel throughout the Kodiak area, baptizing a reported 7,000. He was named head of the mission in 1807. Herman was well-known and well-loved, living among the Aleuts and being a participant in their everyday lives as a teacher of reading, writing, music, and catechism, and as a medic. During an 1819 epidemic, he nursed the people of the village—both Aleuts and Europeans—without thought about his own well-being.

In time, yearning for his solitude, he returned to the life of a hermit, but he never considered himself alone. “God is here, as God is everywhere,” he maintained.

Herman never left Alaska and died on Spruce Island in 1837. St. Herman’s Orthodox Theological Seminary in Kodiak is named in his honor. Herman, called the “Wonderworker of All America,” is remembered on November 15.

Collect for Herman of Alaska
Almighty God, who raised up your servant Herman to be a light in the world, and to preach the Gospel to the people of Alaska: Illuminate our hearts, that we also in our own generation may show forth your praise, who called us out of darkness and into your marvelous light; through Jesus Christ our Lord, who lives and reigns with you and the Holy Spirit, one God, now and for ever. Amen.

Elizabeth of Hungary vs. Herman of Alaska

117 comments on “Elizabeth of Hungary vs. Herman of Alaska”