In the penultimate battle of the Round of 32, Gregory of Nazianzus squares off against Elizabeth the New Martyr. This marks the appearance of the fourth and final Elizabeth of Lent Madness 2020. How have the Elizabeths fared so far? Elizabeth of Hungary went down in flames, losing to Herman of Alaska, but the Biblical Elizabeth and Elizabeth Fry both emerged victorious and punched their respective tickets to the Saintly Sixteen.

Yesterday, Joanna the Myrrhbearer made it past Junia 62% to 38% and will face Bartimaeus in the next round.

In case you missed Monday Madness, in which Tim and Scott previewed the Saintly Sixteen while practicing Xtreme social distancing, you can watch it here. Also, get your priorities in order!

Gregory of Nazianzus desired nothing more than a solitary monastic life steeped in contemplation. Yet by responding to the needs of the church and the call of God, he came to be counted among the influential figures in Christianity, helping restore and establish Nicene Christianity in Constantinople.

Gregory was born around 329 ce in Nazianzus, in the Cappadocia region of present-day Turkey. He was the son of a bishop. Gregory received an excellent education in Athens, where he became a close friend of Basil of Caesarea. Leaving Athens in 351, Gregory sought the solitary monastic life, but after two years, he was called home to assist his father in the management of his diocese and affairs, and—against his will—was ordained priest.

Basil became the bishop of Caesarea, and when a rival who espoused Arian Christianity gained standing, Basil consecrated his old friend Gregory as bishop of Sasima, a hostile border town. The move strained Basil and Gregory’s friendship; Gregory had no desire to live in a difficult place or to become a pawn in church politics. They later reconciled, but the friendship was never the same. In time, Gregory again returned to his father in Nazianzus. But Gregory desired a solitary, contemplative life, and he withdrew to a monastery.

By 379, Constantinople was desperately in need of a strong and able bishop after years of Arian domination. Neighboring bishops sent for Gregory to restore the community; again, he tried to demur but ultimately consented. While Constantinople presented exactly the opposite of Gregory’s desired solitude, his time there proved pivotal for Christianity. He made his house into a church and preached a famous series of sermons on the Trinity that convinced all around him of his faith and understanding of the divinity of Christ and the nature of the Godhead. During the Ecumenical Council of 381, Gregory was installed as bishop of Constantinople and helped restore Christian orthodoxy to the crossroads of East and West.

Yet position and privilege were never Gregory’s desire. After the Council, he returned to Nazianzus, where at long last, he had the simple, contemplative life he craved. He died in Nazianzus in 390.

Collect for Gregory
Almighty God, who has revealed to your Church your eternal Being of glorious majesty and perfect love as one God in Trinity of Persons: Give us grace that, like your bishop Gregory of Nazianzus, we may continue steadfast in the confession of this faith, and constant in our worship of you, Father, Son, and Holy Spirit; who live and reign for ever and ever. Amen. 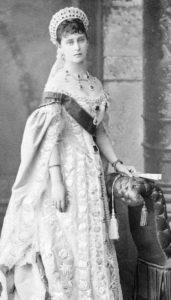 Grand Duchess Elizabeth Fyodorovna of Russia was born February 24, 1864. She was the second daughter of Grand Duke Louis IV of Hesse and Princess Alice of the United Kingdom. Her younger sister, Alexandra Fyodorovna, was the last empress of Russia. When Elizabeth was fourteen years old, her mother and youngest sister died of diphtheria. Elizabeth avoided the same fate because she was not living at home at the time. For a time, she was raised by her grandmother, Queen Victoria. Although she was pursued by her cousin, William II, Elizabeth ultimately chose to marry Grand Duke Sergei of Russia in 1884. After her marriage, Elizabeth embraced Orthodox Christianity.

In 1905 Elizabeth again was forced to confront tragedy when her husband was assassinated with a bomb. In the midst of the assassination Elizabeth is said to have comforted her husband’s coachman as he lay dying. She also later approached her husband’s killer in prison, offering him scriptures and inviting him to the faith.

After her husband’s death, Elizabeth divested her considerable wealth. With the funds she established the Martha and Mary Home in Moscow, a place for women to demonstrate both their devotion to Christ and their commitment to service. In 1909 she and other members of the home were dedicated as Sisters of Love and Mercy. She was engaged in a variety philanthropic ventures for nearly a decade.

In 1918, the Communist government exiled her, along with others from royal families, first to Yekaterinburg and then to Alapayevsk. On July 18, 1918, while still in Alapayevsk, she and others were murdered by local Bolsheviks. They were cast into an abandoned mine shaft and grenades were thrown in after them. Witnesses reported hearing them sing hymns as they died. One of Elizabeth’s last acts was to use her handkerchief to bandage the wounds of one of the princes murdered with her.

Collect for Elizabeth
O God, whose blessed Son became poor that we through his poverty might be rich: Deliver us from an inordinate love of this world, that we, inspired by the devotion of your servant Elizabeth, may serve you with singleness of heart, and attain to the riches of the age to come; through Jesus Christ our Lord, who lives and reigns with you, in the unity of the Holy Spirit, one God, now and for ever. Amen.

149 comments on “Gregory of Nazianzus vs. Elizabeth the New Martyr”