Hold onto your halos as we move into another full week of saintly thrills and spills! With only three matchups left in the Round of 32, we'll soon find ourselves in the Saintly Sixteen. Time flies when you're spending time with the saints. (Oh, and for those of you who didn't get Friday's results, Harriet Tubman drubbed Julie Billiart 83% to 17%).

Please know that if you haven't yet joined in the fun, it's never too late to leap into the Madness. Whether you've voted in the previous 13 battles or are just jumping in now, we welcome you. Especially as more people move into online forms of spiritual devotion in the current climate, we're glad to have you here. We just won't shake your hand.

Speaking of which, on Saturday evening Tim and Scott shared some online prayer resources and a dose of hope in a post titled Lent Madness Carries on, which you can read here. If there was ever a time for online community, that time is now.

Today it's Joanna the Myrrbearer vs. Junia in a matchup of Biblical women. Time to vote! 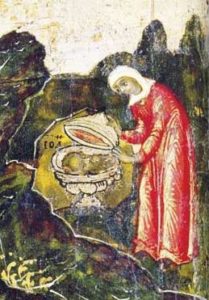 When Joanna—along with Mary Magdalene; Mary, the mother of James; and several other women—told the other disciples they had found Jesus’ tomb empty, the Gospel of Luke tells us her words “seemed to them like nonsense.”

Jesus believed in Joanna enough to invite her to follow him as a disciple and learn from him. The two angels who met her and the women with her at the tomb said to them, “He is not here; he has risen! Remember how he told you, while he was still with you in Galilee: ‘The Son of Man must be delivered over to the hands of sinners, be crucified and on the third day be raised again’” (Luke 24:6-7). Then they remembered Jesus’ words—meaning they had been with him when he spoke them the first time.

Jesus believed in Joanna enough to trust his earthly ministry to her. Luke also tells us that she, along with several other women, was traveling from one town and village to another with Jesus and the disciples, “helping to support them out of their own means.”

It’s clear Joanna was wealthy. Her husband, Chuza, was Herod’s steward, according to Luke. (This is the same Herod who imprisoned and beheaded Jesus’ cousin, John the Baptist, and Orthodox tradition says Joanna retrieved John’s head and gave it an honorable burial.)

She didn’t just stop at giving money to support what Jesus was doing, though. She followed him to the margins. She allowed him to inconvenience her, to lead her beyond her comfortable life. She followed him to the end, when the other disciples fled and deserted him—and even after. She followed to see where his body was laid. She prepared myrrh and other spices and perfumes to care for his body after death. She carried them to the tomb early that first Easter morning, where she was surprised to meet angels instead.

And today Joanna is believed and remembered in Anglican, Roman Catholic, and Eastern Orthodox traditions.

Collect for Joanna
Almighty God, who revealed the resurrection of your Son to Joanna as she faithfully came bearing myrrh to his tomb: Grant that we too may perceive the presence of the risen Lord in the midst of pain and fear, and go forth proclaiming his resurrection; who lives and reigns with you and the Holy Spirit, one God, now and for ever. Amen. 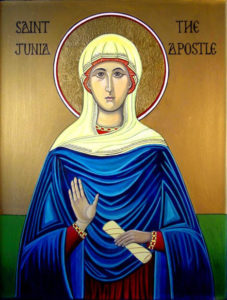 Junia is known to us from a short verse at the end of Paul’s letter to the Romans. Paul had not personally been to Rome, and he wrote the letter as an introduction (though it did take him sixteen chapters. Seriously, Paul, get to the point!). In chapter 16 Paul greets a series of people: twenty-seven believers in Jesus, ten of whom were women (hello, matriarchs of the faith!). These people, who were known and respected by believers in Rome, would ostensibly vouch for Paul.

In Romans 16:7, Paul writes, “Greet Andronicus and Junia, my relatives who were in prison with me; they are prominent among the apostles, and they were in Christ before I was.” In this short greeting we learn a lot about Junia. First, she is a fellow Jew, likely married to Andronicus. She, like Paul, has suffered imprisonment. She is prominent among the apostles, i.e., the people who have encountered the risen Christ and been commissioned to proclaim the good news. Paul would not use this term lightly. He has specific ideas about apostleship and is frequently at pains to defend this category. Further, we learn that not only is Junia an apostle, but also she is prominent among the apostles. That is to say, she’s an exceptional apostle. Finally, Junia has been in Christ longer than Paul. Paul was an early believer in Jesus. This statement puts her squarely in the first generation of followers of Jesus.

In spite of Junia’s universal recognition as a woman leader in the church for the first thousand years of Christianity, in the twelfth century, doubts about her sex began to emerge. Her name was thought to be a shortened form of the man’s name, Junianus. Martin Luther’s German translation of the Bible helped popularize this (quite improbable) understanding. By the nineteenth century, Junia was almost universally thought to be a man in the Western Church (the Orthodox folk knew better).

In recent decades biblical scholars have revisited the question and found unequivocally that Junia was, in fact, a woman leader. She is a reminder of the struggle that women have had to find their voice in the church. As such, here and now, in this opening round of the 2020 edition of Lent Madness we formally acknowledge Junia to be the patron saint of gaslit women.

Collect for Junia
Almighty God, whose Son, the risen Christ, sent forth your apostles Andronicus and Junia to proclaim the gospel and extend your reign: send us forth in your Holy Spirit, that women and men may minister as one in faithful witness to the gospel of Jesus Christ; who lives and reigns with you and the Holy Spirit in perfect unity, one God, now and for ever. Amen.

162 comments on “Joanna the Myrrhbearer vs. Junia”