Today we head back to the Biblical quadrant as Jude takes on Bartimaeus. Will Bartimaeus' attempt to dethrone Jude prove to be a lost cause? Or will he see his way to victory? These are the questions of the day.

In yesterday's saintly action, James Solomon Russell easily defeated Evelyn Underhill 66% to 34% to advance to the Saintly Sixteen, where he'll face the winner of Harriet Tubman vs. Julie Billiart.

And if for some shocking reason, you missed yesterday's nominally epic episode of Monday Madness with Tim and Scott, you can watch it here. It involves rivers of purple beverages, among other things. 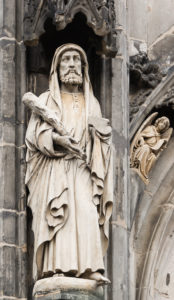 Jude is listed as one of the twelve apostles and is purported to be the writer of the epistle that bears his name. Tradition says Jude, along with Simon, traveled to Persia, Arabia, and Mesopotamia. Finally, he went to the city of Edessa to meet with King Abgar. Images of Jude often show him holding the Image of Edessa, a holy square of cloth upon which an image of the face of Jesus appeared. The Image of Edessa is considered the first icon of Christ.

This image came to Edessa when King Abgar wrote to Jesus asking him to come and heal him. Jesus replied, saying he would send one of his disciples. So impressed with the king’s faith, Jesus pressed his face into the cloth and gave it to the messenger to assure the king his disciple would visit. Some accounts say the disciple Jude was chosen to travel to Edessa to deliver the sign from Jesus. King Abgar was healed, and all the people under his rule converted to Christianity in response.

Jude is a disciple plagued with an identity crisis. He is distinguished from Judas Iscariot and also noted as Jude of James in Luke/Acts. He is referred to as the brother of Jesus in Matthew and Mark. In the apostolic lists of Matthew and Mark, no Jude appears, but there is a Thaddeus. Some biblical scholars have suggested Jude and Thaddeus are the same person, and Thaddeus was a nickname. Other scholars disagree, stating that Jude and Thaddeus are different people.

Jude is most commonly known as the patron saint for the hopeless and despaired and the patron saint of lost causes. This patronage inspired comedian Danny Thomas to found St. Jude Children’s Research Hospital. Thomas, awaiting the birth of his first child and struggling with his career, went to Mass and placed his last $7 in the offering plate. He offered prayers to Saint Jude to provide a way forward. Thomas recalls getting a job the next week that paid him enough to pay bills for a while. He then promised Saint Jude a shrine. Years later, Thomas kept that promise by founding the American Lebanese Syrian Associated Charities, which serves as the fundraising organization of St. Jude Children’s Research Hospital, the shrine Thomas founded in thanksgiving for Saint Jude.

Collect for Jude
O God, we thank you for the glorious company of the apostles, and especially on this day for Jude; and we pray that, as he was faithful and zealous in his mission, so we may with ardent devotion make known the love and mercy of our Lord and Savior Jesus Christ; who lives and reigns with you and the Holy Spirit, one God, for ever and ever. Amen. 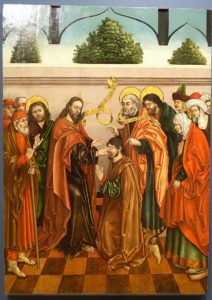 Bartimaeus, literally “son of Timaeus,” was a blind beggar healed by Jesus in one of his last documented miracles. This miracle is recounted in all three synoptic gospels (Matthew, Mark, and Luke) with Jesus healing the blind man as he and his followers are leaving Jericho, just before the Passion.

Bartimaeus is one of the very few people healed by Jesus whose name appears in the gospels. This could be because Bartimaeus served the church after his healing and became a disciple of Jesus.

Jesus, Mark tells us, stands still. Luke tells us Jesus stops, and then invites Bartimaeus to approach him. So Bartimaeus throws off his cloak and goes to Jesus—a symbol of giving everything away for a chance to be near Jesus; the action symbolizes his deep faith that he won’t need the cloak anymore. He knows he will be healed.

“What do you want me to do for you?” Jesus asks. “Let me see again. I want to see,” Bartimaeus asks. With these words, he teaches us, believers and followers of Jesus, that we must ask for what we want when Jesus is near.

“Your faith has made you well. Your faith has healed you.” Bartimaeus’s faith stops Jesus, moves Jesus, and inspires Jesus to heal him.

According to Mark, after being healed, Bartimaeus follows Jesus on the Way.

Collect for Bartimaeus
Almighty God, you have surrounded us with a great cloud of witnesses: Grant that we, encouraged by the good example of your servant Bartimaeus, may persevere in running the race that is set before us, until at last we may with him attain to your eternal joy; through Jesus Christ, the pioneer and perfecter of our faith, who lives and reigns with you and the Holy Spirit, one God, for ever and ever. Amen.

138 comments on “Jude vs. Bartimaeus”