Margaret of Castello vs. Simon Gibbons

Today we have an intriguing matchup between two saints of different eras. Margaret of Costello was a blind, disabled medieval nun who overcame great hardship to follow her faith. Simon Gibbons was Canada's first Inuit priest, born in the mid-19th century.

With this decision, the door will close on the first full week of Lent Madness 2020. From here on out, voting will take place only on the weekdays of Lent. Which means the Lent Madness faithful must suffer the indignity of Lent Madness Withdrawal (LMW) on the weekends of Lent. This is a difficult condition to endure and, at this time, there is no known cure. Please be kind to yourselves, friends. And we'll see you bright and early on Monday morning as James Solomon Russell faces Evelyn Underhill. 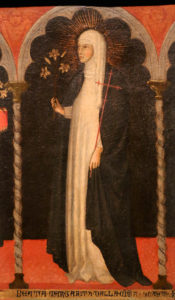 Margaret of Castello (to whom I am not related…like 99 percent sure) was born sometime in 1287. We don’t know when exactly, because her parents—a noble couple named Parisio and Emilia—did not care for her.

She was born blind with a severe curvature of the spine that inhibited walking. Her parents resolved to hide her away, so that her appearance could not bring shame to the family honor. However, Margaret, as she was named by a kind maid, resolutely refused to die. Despite her parents locking her in a back room and forbidding her to see anyone, she managed to win the sympathy of the household staff and the local priest, who taught her the Christian faith.

One day, Emilia heard stories of a Franciscan friar who was performing miracle cures in Castello. She convinced her husband to take Margaret there, in hopes of a “cure.” They wrapped the teenager in a black shroud and smuggled her to the town, but as luck would have it, the friar had died while they were making the journey. Emilia tried to get another friar to “heal” Margaret, but no cure was forthcoming. Frustrated and embarrassed, the parents abandoned their daughter in Castello and went home.

But Margaret didn’t give up. The local beggars in town took pity on her and taught her how to beg so she could feed herself. She made her way by teaching the street children to read and learn different prayers. She also watched the children while their parents worked, essentially running a medieval daycare. In 1303, she came across some Dominican friars and begged to be allowed to join their order as a laywoman. She was inducted into the third order of the Dominicans and wore the habit until her death at the age of thirty-three. When she died, crowds from all over the countryside came to her funeral, drawn by their love of her and her compassion. They demanded that she be buried on church grounds.

Margaret is particularly loved by those who are disabled themselves. Unlike other saints, who either suffered momentarily in the process of martyrdom or suffered only to be healed, Margaret was born disabled and lived a life that showed Christ’s love in a disabled body. Her quiet love and resolute life won out against the ignorance of society and of the Church, in a struggle that inspires many today.

Collect for Margaret of Castello
Compassionate God, your daughter Margaret experienced the pain of rejection, and the joy of serving you and your people; grant to us, we pray, the courage and compassion to find your presence wherever we look, and the reflection of your beauty shining in every face we encounter. Through Jesus Christ our Lord. Amen. 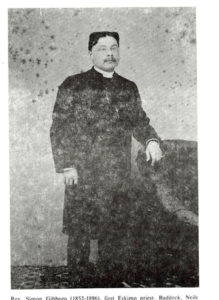 God loves a “hilarious” giver, according to Leonard F. Hatfield’s rendering of 2 Corinthians in the Dictionary of Canadian Biography. And Simon Gibbons, it seems, was that.

Born in 1851, Gibbons was Canada’s first ordained Inuit priest, a prolific church builder, and a gifted communicator. At the time Hatfield wrote his biography of the saint in 1990, stories were still told in the parishes where Gibbons ministered that he had been discovered on an ice-floe off the coast of Labrador.

Other stories, which Gibbons also may have encouraged, were shared about his first appointment as an Anglican missionary on Cape Breton Island, at the eastern edge of Nova Scotia. With food and a change of clothes on his back, he traveled from place to place across the mission, sometimes on trails that could only be navigated by snowshoe in the winter. One story has him hopping across drifting ice to cross an inlet; another, crawling along a frozen shoreline to reach an isolated community at Christmastime.

Gibbons traveled twice to Great Britain, where he raised money to build new churches, preached at Westminster Abbey, and appeared before Queen Victoria. While he was bullied as a child for being Inuit, he found that in England, in his own words, “my face was my fortune.” Large audiences came to hear Canada’s first Inuit priest preach, and reports praised his “musical voice,” “fluent and eloquent speech” and “attractive personality,” according to Hatfield.

But Gibbons’s time as a traveling missionary seemed to have taken a toll on his health. He served two more parishes in Nova Scotia, taking some time in between to recover. He became known as “champion church builder of the diocese,” assisting in the construction of seven new churches in Nova Scotia. Many still can be recognized by their distinctive bell towers, which he helped construct himself.

Gibbons died in 1896 and, befitting one of the stories he encouraged, he was buried in the Parrsboro parish cemetery during what was reportedly one of the wildest winter storms of the century. He is remembered by the Anglican Church of Canada on December 14.

Collect for Simon Gibbons
Almighty God, whose will it is to be glorified in your saints, and who raised up your servant Simon Gibbons to be a light in the world: Shine, we pray, in our hearts, that we also in our generation may show forth your praise, who called us out of darkness into your marvelous light; through Jesus Christ our Lord, who lives and reigns with you and the Holy Spirit, one God, now and for ever. Amen.

Margaret of Castello vs. Simon Gibbons

144 comments on “Margaret of Castello vs. Simon Gibbons”