Welcome to the Saintly Sixteen! With your help, we have successfully cut our 32 saints in half. Numerically speaking, that is, not in a martyred 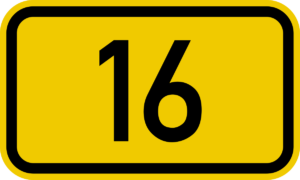 kind of way. For this round, rather than the basic biographical information we enter the realm of Quirks and Quotes. Our brilliant Celebrity Bloggers will provide unusual information or legends surrounding their saints along with quotes either by or about their saints.

Yesterday Clare of Assisi snagged the final spot in the Saintly Sixteen by defeating Isidore of Seville 59% to 41%. Clare will face Elizabeth Fry in the next round.

We kick things off with a matchup between Thomas More and Herman of Alaska. To get to this point, Thomas defeated James the Less in the very first battle of Lent Madness 2020, while Herman surprised Elizabeth of Hungary. 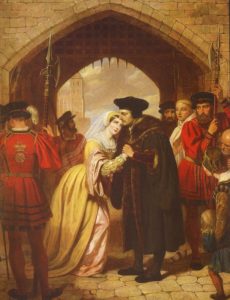 Sir Thomas More is as multi-faceted an individual as any in history: at once stern and witty; ahead of his time and behind his time; prayerful and pious, and yet also politically calculating and cunning. Opinions on More sway as easily as the breeze, depending highly on the counsel one chooses to take on More’s life and character, and there is a  good case is to be made that all those opinions are correct. Yet More’s conviction to the church, and his faith in God remain beyond question.

Among More’s masterworks was Utopia, writing some consider a political essay, and others consider political satire. In Utopia, More imagines the ideal community, including, fittingly, a good way to run meetings—a lesson many a church Vestry could stand to heed:

“One rule observed in their council is, never to debate a thing on the same day in which it is first proposed; for that is always referred to the next meeting, that so men may not rashly and in the heat of discourse engage themselves too soon… to prevent this, they take care that they may rather be deliberate than sudden in their motions.”

Given so many church meetings stress over finances, it is also notable that More’s Utopia also imagined a world where people, rather than wealth, stand at the center of human society:

“They wonder much to hear that gold, which in itself is so useless a thing, should be everywhere so much esteemed, that even men for whom it was made, and by whom it has its value, should yet be thought of less value than it is.”

Perhaps aware of his polarizing character, after he was imprisoned for refusing to disavow the Roman Catholic Church after Henry VIII’s assertion of control over the Church in England, More wrote to his daughter Margaret Roper:

“I do no­body harm, I say none harm, I think none harm, but wish everybody good. And if this be not enough to keep a man alive, in good faith, I long not to live.”

And even as he was led to his death, More proclaimed that

“I die the king's faithful servant, and God’s first.”

More’s legacy is complex, including to Episcopalians and Anglicans. Perhaps foreseeing his own end, he wrote of Richard III in 1543,

“For men use, if they have an evil turn, to write it in marble: and whoso doth us a good turn we write it in dust.”

Whether More is for dust or marble remains a debatable question, even to this day. One cannot doubt, however, More’s depth of sincerity and conviction. 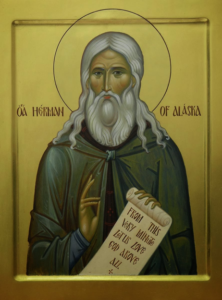 During his 85 years, Herman of Alaska dedicated his life to the Gospel. He maintained, “A true Christian is made by faith and love toward Christ. Our sins do not in the least hinder our Christianity, according to the word of the Savior Himself.”

In 1794 when Herman embarked on a voyage to Russian-owned Alaska, he was filled with missionary zeal. “From this day forth from this very hour and this very minute, let us love God above all and seek to accomplish His Holy Will,” Herman reflected.

What he discovered in Alaska were flourishing trading posts, many fellow Russians, and the mistreatment of the Aleuts, the native inhabitants of that area.

His writings reflect how sickened he was of the harsh domination, and of his calling to comfort the populace in their misery. Herman wrote, “Since the welfare of this nation by the Providence of God, it is not known for how long, is dependent on and has been entrusted into the hands of the Russian government which has now been given into your own power, therefore I, the most humble servant of these people, and their nurse stand before you in their behalf, write this petition with tears of blood. Be our Father and our Protector. Certainly we do not know how to be eloquent, so with an inarticulate infant’s tongue we say: Wipe away the tears of the defenseless orphans, cool the hearts melting away in the fire of sorrow. Help us to know what consolation means.”

Herman’s life in the vast wilderness was tough; nonetheless his ministry to the Aleuts never wavered. While tending to the sick through an epidemic, he related: “I saw mothers over whose bodies cold in death crawled a hungry child, crying and searching in vain for its food...My heart was bursting with compassion! It seemed that if anyone could paint with a worthy brush the full horror of this tragic scene, that he would have successfully aroused fear of death in the most embittered heart.”

Herman never returned to his homeland and retreated to the life of a hermit in his later years. He always knew he was not alone. "God is here, as God is everywhere," he said.

Even as his life ebbed and he reflected on his relationship with his Maker, Herman remained committed to spreading the Gospel, questioning and challenging others: “I, a sinner, have been trying to love God for more than forty years, and cannot say that I perfectly love Him. If we love someone we always remember him and try to please him; day and night our heart is occupied with that object. Is that how you, gentlemen, love God? Do you often turn to Him, do you always remember Him, do you always pray to Him and fulfill His holy commandments?”

Upon his death on November 15, 1836, Bishop Peter Kashevarov reported, “In general all the local inhabitants have a reverent respect for him as a holy ascetic, and are entirely convinced of his having pleased God.”

107 comments on “Thomas More vs. Herman of Alaska”