Joan of Arc vs. Catherine Booth

Welcome to the highly anticipated matchup between the Wednesday Warrior Women! Today Joan of Arc, the young soldier/saint, faces Catherine Booth, preacher and driving force behind the formation of the Salvation Army. See...warriors.

Yesterday, in a hotly contested matchup -- the closest battle so far this year -- Melangell held Hermione at bay 52% to 48% to advance to the next round. This marks the first time a Saintly Sixteen battle has been finalized as Melangell will square off against Camillus de Lellis.

Please also note that at about 8:30 pm EST, the Lent Madness Voter Security Unit noticed 389 bogus votes for Hermione. These votes were removed, and the suspect addresses were blocked. This is a reminder. Do not cheat. Vote once. Get your neighbors to vote. But don’t vote several times, lest you be cast into the outer darkness of Lent Madness, where there will be weeping and gnashing of teeth. Rest assured that those who perpetrate voter fraud in Lent Madness will be prosecuted to the fullest extent of the Law of Moses. 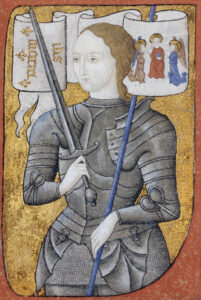 Jeanne la Pucelle was born in 1412 in France, in the midst of the Hundred Years’ War between England and its allies and France. When she was about thirteen years old, Joan began to have visions of saints that were so beautiful she said she wept after experiencing them. Over the years, these heavenly messengers shared with her the mission to help Charles of Valois (the king-inwaiting) claim the French throne. As a covenant of this mission from God, Joan took a vow of chastity. Her father promptly arranged a marriage for her, while Joan asserted she should remain unmarried.

As the visions continued, Joan argued with the heavenly messengers, saying she was only a poor girl who could neither ride nor fight. Saint Michael replied, “It is God who commands it.” Joan went again to meet the French leaders. During this trip, Joan began to dress in clothing traditionally worn by male soldiers. Whether this was a choice by Joan or a protective measure as her party traveled through hostile territory remains unknown, but her clothing choice would later be among the charges of heresy and witchcraft.

Joan’s message to Charles infused the war with a religious fervor, with France fighting on the side of God. Charles’s advisors investigated Joan’s faith and reported that she was a good Christian with virtues of humility, honesty, and simplicity. Court theologians suggested Charles put Joan to the test and see if she could, indeed, lead the French army to a divinely inspired victory at Orleans. In March 1429, Joan wore white armor, rode a white horse, and led French troops into battle in Orleans. France was victorious.

The French gained several victories under Joan’s leadership, but she was captured in 1430. The English put her on trial, claiming she was a heretic and witch. King Charles, seeking to save his power, distanced himself from Joan. After the trial, Joan was burned to death at the stake on May 30, 1431.

Her fame and inspiring leadership, however, continued to grow, and twenty years later, the same Charles who did nothing to save her life ordered a new trial to clear her name. On May 16, 1920, Saint Joan of Arc was canonized.

Collect for Joan of Arc
Holy God, whose power is made perfect in weakness: we honor you for the calling of Jeanne d’Arc, who, though young, rose up in valor to bear your standard for her country, and endured with grace and fortitude both victory and defeat; and we pray that we, like Jeanne, may bear witness to the truth that is in us to friends and enemies alike, and encouraged by the companionship of your saints, give ourselves bravely to the struggle for justice in our time; through Christ our Savior, who with you and the Holy Spirit lives and reigns, one God, now and for ever. Amen. 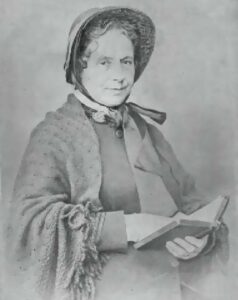 The middle of the nineteenth century did not provide, by any stretch of the imagination, a fertile environment for the work of women in preaching and church leadership. Yet despite this hostile environment, Catherine Booth blazed a trail for others to follow in her role as the “Mother of the Salvation Army.”

Born in 1829 to Methodist parents in Derbyshire, England, Catherine presented from a young age a deep aptitude for leadership in the church. By age twelve, she was said to have read the Bible through—eight times. In the midst of a controversy in English Methodism in 1850, she refused to condemn a group of Methodist Reformers and was expelled with others from the larger body of English Methodists. Among this group of reformists was William Booth, who would become her husband.

The Booths became active in the work of a church in West Yorkshire. During this period, she wrote a pamphlet Female Ministry: Women’s Right to Preach the Gospel. She argued three primary points: first, that women are not inferior to men; second, that no scriptural authority exists to deny women public ministry; and that the action of the Holy Spirit had blessed and sanctified this ministry, in line with what we read in the Bible. She was eloquent, compelling, and ferocious in her defense of the right of women to preach the gospel. Her arguments won many converts—including her husband, who initially opposed her efforts.

She soon became a key partner in the ministry of The Christian Mission with her husband in London’s East End. William preached to the poor; Catherine spoke to the wealthy and gained their support for their ministry. She organized the Mission’s Food for the Million shops, where the poor could buy inexpensive meals throughout the year and oversaw Christmas distributions of meals to the needy.

In 1878, The Christian Mission became The Salvation Army. William Booth became known as the “General” and Catherine Booth as the “Mother of the Salvation Army.” She played a key role in the organization, from helping refine its beliefs to the design of the uniforms. Catherine Booth was a pioneer and a trailblazer for the public preaching and teaching ministry of women, a fact that seems all the more remarkable at the height of the Victorian age.

Collect for Catherine Booth
Almighty and everlasting God, we thank you for your servant Catherine, whom you called to preach the Gospel. Raise up in this and every land evangelists and heralds of your kingdom, that your Church may proclaim the unsearchable riches of our Savior Jesus Christ, who lives and reigns with you and the Holy Spirit, one God, now and for ever. Amen.

Joan of Arc vs. Catherine Booth

200 comments on “Joan of Arc vs. Catherine Booth”