Welcome to the one and only Saturday vote of Lent Madness 2021. After today, your weekends will be free from difficult and heart-wrenching electoral/sanctoral decisions. Today, though, it's Tarcisius vs. Egeria

Yesterday, Constantine dominated Miguel Pro 62% to 38% in a controversial matchup that left some voters abstaining, but every voter thinking, contemplating, and learning. Which is precisely the point!

Enjoy the Lord's Day tomorrow and we'll see you bright and early on Monday morning as we begin the first full week of Lent Madness 2021, with the Battle of the Greats as Leo the Great takes on Albert the Great. Thanks for joining us on this journey. We are truly grateful you've made Lent Madness part of your Lenten devotions this year.

Very little is known about the young boy martyr, Tarcisius. Our earliest reference to him comes from Pope Damasus in the late fourth century ce. In a poem honoring martyrs, Pope Damasus writes of Tarcisius, “When an insane gang pressed saintly Tarcisius, who was carrying the sacraments of Christ, to display them to the profane, he preferred to be killed and give up his life rather than betray to rabid dogs the heavenly body.” Tarcisius then, like Stephen, is a Christian witness who fell victim to mob violence.

Later stories fill in what might have transpired. According to those stories, during the reign of Valerian (253-259 ce), Tarcisius was a young altar server. Many Christians had been rounded up and put into jail for their belief. After the host had been consecrated in clandestine worship services, it was delivered to those who were imprisoned. Priests were easily recognized and targeted for harassment and arrest, so they would send others to deliver the consecrated host. One Sunday, young Tarcisius volunteered to deliver the eucharist to those in prison.

On his way to deliver the host, he passed a group of young friends who invited him to play a game. They were perplexed when he declined and began to jostle and tease him in good fun. They noticed he was clutching something to his chest, and they began to try to pry it from him. He knew the value of this treasure and the importance of his mission, and he held the host ever closer to his chest. The scrum, playful at first, grew more violent. In the tussle, one of the attackers saw a fish etched into the box holding the host. The playful abuse turned to violent assault as the boys began to pummel him for being a Christian.

Tarcisius is the patron saint of altar servers and first communicants. His feast day is August 15.

Collect for Tarcisius
Almighty God, by whose grace and power your holy martyr Tarcisius triumphed over suffering and was faithful even to death: Grant us, who now remember him in thanksgiving, to be so faithful in our witness to you in this world, that we may receive with him the crown of life; through Jesus Christ our Lord, who lives and reigns with you and the Holy Spirit, one God, for ever and ever. Amen. 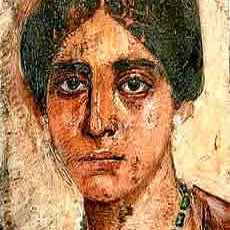 Egeria was a fourth-century woman who traveled to the Holy Land and wrote about her experiences, leaving the world an invaluable record of the development of language, liturgy, and Christianity.

We don’t know all that much about Egeria, the person. From her writing, it would appear that she had some status—the ability to travel from Europe to Palestine in the late 300s was not common. We also know she was a woman of deep faith, in that she undertook such a journey.

Her extant writing consists of a lengthy letter, now in two fragments, that she sent back to her community in Europe. Scholars are divided as to whether this community was based in Spain or perhaps France. She addresses them as “her sisters,” which could signify a monastic community, but this was early enough that all Christians tended to address fellow believers with sibling nomenclature.

One fragment of her letter describes her approach from Mount Sinai to Constantinople, and the other fragment describes, in great detail, the liturgical practices of the church in Jerusalem and Galilee over a year. Egeria, it would seem, spent at least three years in Palestine, making notes and observations. This provides us with invaluable information about the liturgical life of the early church and how various reforms and ideas moved throughout the Christian world. Her letter, for example, gives us the first record of such familiar rituals as the Palm Sunday procession, the Easter Vigil, and the Good Friday remembrance.

Egeria’s bravery and creativity enabled the entire Western world to access the liturgical life we now enjoy, as well as the language we use every day.

Collect for Egeria
Almighty God, whose will it is to be glorified in your saints and who raised up your servant Egeria to be a light in the world: Shine, we pray, in our hearts, that we also in our generation may show forth your praise, who called us out of darkness into your marvelous light; through Jesus Christ our Lord, who lives and reigns with you and the Holy Spirit, one God, now and for ever. Amen.

198 comments on “Tarcisius vs. Egeria”