Albert the Great vs. Theodora the Empress

Sure, Confusion Corner is a bit less confusing in the Saintly Sixteen, but it's no less compelling. Today Albert the Great, who defeated Leo the Great, faces Theodora the Empress, who took down Theodora of Alexandria. Who will be victorious, the Great one or the Empress? That's the question of the day.

Yesterday Arnulf of Metz kept the party going, as he bid farewell to Egeria 59% to 41% in what some prognosticators are calling a major upset.

If you missed this week's Monday Madness, be sure to catch it here. It's as thrilling as always. Now go vote! 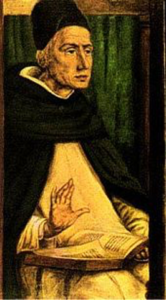 Albert the Great had a lot to say on a lot of subjects. Truth is, in all topics he knew what he was talking about.

Albert the Great was a 13th century highly educated scientist and a brilliant scholar who was also a German bishop and theologian. He was an expert in all the sciences from alchemy to zoology. A prolific writer, his wide-ranging books and treatises included a presentation of the works of Aristotle for the first time to a medieval European audience. In 1899, his assembled works filled 38 volumes.

He bridged the realms of science and faith. “We exist because God is good,” he stated, “and we are good insofar as we exist.”

His scientific explorations focused on understanding. "For it is [the task] of natural science not simply to accept what we are told but to inquire into the causes of natural things," he believed

On the topic of friendship, Albert aligned with Aristotle, believing friendship is a virtue with levels of goodness: the useful, the pleasurable, and the authentic or unqualified good.

Albert is associated with two great legends. The first tells that in 1223 or thereabouts, Albert was visited by the Virgin Mary, which prompted his path to joining the Dominican Order, leading to ordination as a priest and bishop, and a lifelong study of theology.

His widespread impact is seen through the centuries, both positive and no-so complementary.

In the Divine Comedy of 1320, Dante names Albert along with Thomas Aquinas as lovers of wisdom (Spiriti Sapienti) in the Heaven of the Sun.

In her 1818 novel, Mary Shelley named Albert as one of the three major educational influencers on her main character, Dr. Victor Frankenstein, especially the part about owning the Philosopher’s Stone.

English philosopher, friar, and fellow alchemist Roger Bacon honored his contemporary Albert by calling him “the most noted of Christian scholars.”

Conversely, 19th century Danish theologian and philosopher Søren Kierkegaard said Albert "arrogantly boasted of his speculation before the deity and suddenly became stupid" in The Concept of Anxiety.

An expert in the sciences, a skillful writer, a leader in the church, a theologian of deep faith and thought, Albert is deserving of his title, The Great. 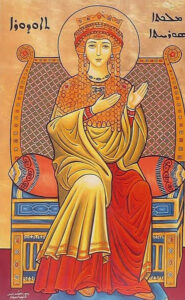 During Justinian I and Theodora’s reign, a rebellion rose up from the people. Rioters attacked everything around them. The mob burned down offices, public buildings, and Hagia Sophia. They started to destroy the palace. Their aim was clear: they wanted depose Justinian from his throne.

Meanwhile, Justinian gathered with his advisors, and as they looked at the crowd, they thought that running away would be the best solution.

Then Theodora counseled Justinian. She said that he should stand his ground. She argued that it would be better for him to die on his throne than to run. She reportedly stated this in different ways. She stood before his counsel and gave a speech:

I do not care whether or not it is proper for a woman to give brave counsel to frightened men; but in moments of extreme danger, conscience is the only guide. Every man who is born into the light of day must sooner or later die; and how can an Emperor ever allow himself to become a fugitive? If you, my Lord, wish to save your skin, you will have no difficulty in doing so. We are rich, there is the sea, there too are our ships. But consider first whether, when you reach safety, you will not regret that you did not choose death in preference. As for me, I stand by the ancient saying: royalty makes the best shroud.

In the same vein, Theodora said, “The Royal Purple is the Noblest Shroud.”

And, “For my own part, I adhere to the maxim of antiquity, that the throne is a glorious sepulchre.”

Even as the Empress, she never forgot her position as a woman. Yet, when the men around Justinian counseled them to flee, she could not help but balk against her expected role when she said, “I know it's the belief that women should never show daring in front of men. Never be bold when men hesitate. I know flight is not the answer; even to save our lives.”

After Theodora’s resolute words, Justinian remained on his throne. Then, Justinian’s generals gathered the rioters into the Hippodrome and slaughtered them.

Although the Empress is well-known for her stirring speech, she also had a great sense of humor, which came out in her observation: "I suddenly realized I was a writer of wide reputation and most of it bad."

Albert the Great vs. Theodora the Empress

111 comments on “Albert the Great vs. Theodora the Empress”