If you need a quick refresher on those first round battles (and want to look at the initial bios), click the Bracket Tab. Just beneath the bracket, you'll find all the previous matchups sorted by round.

We kick things off with Camillus de Lellis vs. Melangell. In the first round, Camillus trounced Matthias while Melangell narrowly defeated Hermione.

Yesterday, we finished up the Round of 32 as Catherine of Genoa smothered Catherine of Bologna 65% to 35% in the Battle of the Deli Meats. Just be glad there's no patron saint of head cheese... 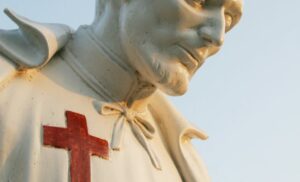 Camillus would not be described as being quirky, which carries with it a nuance of odd but charming. Camillus was, quite honestly, rough, unpleasant, and quarrelsome. He was a gambler, a habit that led to financial, physical, and spiritual ruin throughout much of his life.

Having nowhere else to go and no way to earn a living because of an incurable leg wound likely a result of his short-lived military career, he went to the St. Giacomo hospital, from which he was eventually expelled because he was rough, unpleasant, and quarrelsome. He gambled some more, lost even more, and eventually made his way to a Capuchin friary. There, he was overwhelmed by a sermon he heard, and realized he could serve God and those in need with his life. However, he was denied admission to the order, in part because he was rough, unpleasant, and quarrelsome.

So he returned to St. Giacomo, and while still having the qualities that got him excused the first time, God was focusing those same qualities into passions to help the sick. He also discovered the Jesuits, who appreciated his rough, unpleasant, and quarrelsome ways; he was ordained to the priesthood at age 34.

He organized a group of lay and ordained people to become servants of the sick, which eventually became Order of the Ministers of the Infirm. Camillus chose red crosses on their black cassocks and capes to terrorize the devil while they cared for the sick and dying.

His roughness found energy in making sure hospitals were clean and those who cared for the sick were competent. He did not suffer stupidity and filth around those in need of healing. He continued to have an unpleasant streak that showed when people limited him from his ministry. While caring for plague victims, Camillus discovered people were being buried alive—they weren’t dead yet. So he demanded all members of the Order pray for those who had died for 15 minutes after their apparent death, just to make sure.

His quarrelsomeness became a passion for his ministry to the sick and dying. Camillus, in his later years, suffered many sores on his legs and feet, greatly limiting his mobility. On days he couldn’t walk from bed to bed to offer prayers for the dying, he crawled to their bedsides to minister.

At age 64, Camillus learned he himself was dying. He replied, “I rejoice in what has been told me. We shall go into the house of the Lord.” He received the Eucharist as he died, confessing that he was the most wretched of sinners, undeserving of the grace God has bestowed on him that saved him. 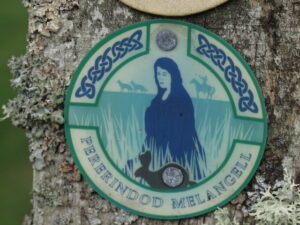 But her story—of fleeing marriage and royal life to become a hermit, of protecting a defenseless hare from a prince’s hunting dogs, of providing rest and safety to all creatures in need at Pennant Melangell in Wales—continues to offer sanctuary to many.

“It dramatizes the strength of contemplative resistance; it tells us that there is a place to be away from hunting,” writes Welsh Anglican bishop Rowan Williams in a foreword to the poetry collection “The Hare That Hides Within: Poems about St. Melangell.”

“Whether this is read in connection with human abuse of nature, male abuse of women, or power’s abuse of prayer in general, the pattern is similar,” Williams continues.

Some writers have lent their voices to Melangell, who says in Norman Schwenk’s poem “Rime of St. Melangell,” that she was “weary of running, like the hare / Hounded day and night.”

Welsh antiquarian Thomas Pennant wrote Melangell had “lived fifteen years without seeing the face of a man” at Pennant Melangell, making her relatable after a pandemic year largely spent in lockdown.

And a recent guide to pilgrimage in Wales points out she and her abbey connect with people beyond her own tradition. With its pre-Christian and ancient Celtic connections, Pennant Melangell was and continues to be a place of pilgrimage for followers of pagan traditions.

Other writers have offered readers sanctuary in their words about the saint, especially the poets.

For those seeking a place away from hunting—perhaps a “thin place” like Pennant Melangell, where Celts believe heaven and earth are especially close—there are the words of Anne Cluysenaar’s poem “On a Visit to Pennant Melangell”:

In this Welsh valley
her Irish Gaelic
quested for God.
The valley speaks
no language. In exile
she was at home,
trusting the place.

For those seeking healing like the prince who was changed by his encounter with Melangell, there are the words of John Freeman’s poem “The Rebirth of Brochwel”:

You need her healing love.
She will flourish from the good
you take from here to do
in her name in the world.

And for those who would, like Melangell, offer a picture of God’s rest and safety to a weary world, there are the words of Ruth Bidgood’s poem “Hare at Pennant,” told from the hare’s perspective:

All I have been, am, she shelters.
‘Not, I,’ she says, ‘it is my Lord.’ But she
is what I know, soft-robed saint,
gentle one, who heard my piping cry,