Today we're back for our second helping of Saintly Sixteen action as the round of Quirks and Quotes continues. Catherine Booth takes on Constantine as 19th century meets 3rd century -- a pairing you'll only ever encounter in the looniness of Lent Madness. To get here, Catherine upset Joan of Arc, while Constantine got past Miguel Pro.

Yesterday, in a hotly contested matchup, Camillus de Lellis snuck past Melangell 52% to 48% to become the first saint to snag a spot in the Elate Eight. Serious bracketologists will note the battle also made Lent Madness history for most "Ls" in a single pairing.

Well, we're off for the weekend, but we'll be back bright and early Monday morning as Arnulf of Metz faces Egeria. Try not to miss us too much. 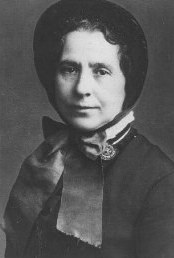 Catherine Booth was a gifted preacher, teacher, and evangelist—and fearlessly carried those gifts at the height of the Victorian era—where the leadership of women in preaching and the church was at best unknown, and at worst derided and mocked. Booth once preached “There is no improving the future, without disturbing the present, and the difficulty is to get people to be willing to be disturbed.” Truly, Booth was a pioneer willing to be disturbed; not only her preaching but her work among England’s poor and disenfranchised are a legacy that lasts to this day.

Indeed, Catherine understood that disruption as part and parcel of the Christian life, and the church all too often seeks to ease its discomfort with easy solutions—thereby showing the motive for her ministry in the hardest and most difficult places, and in spite of opposition: “It is a bad sign for the Christianity of this day that it provokes so little opposition. If there were no other evidence of it being wrong, I should know from that. When the Church and the world can jog along together comfortably, you may be sure there is something wrong. The world has not altered. Its spirit is exactly the same as it ever was, and if Christians were equally faithful and devoted to the Lord, and separated from the world, living so that their lives were a reproof to all ungodliness, the world would hate them as much as it ever did. It is the Church that has altered, not the world."

Indeed, Catherine didn’t have time for lukewarm Christianity: “Here is the reason why we have such a host of stillborn, sinewless, ricketty, powerless spiritual children. They are born of half-dead parents, a sort of sentimental religion which does not take hold of the soul, which has no depth of earth, no grasp, no power in it, and the result is a sickly crop of sentimental converts. Oh! the Lord give us a real, robust, living, hardy, Christianity, full of zeal and faith, which shall bring into the kingdom of God lively, well-developed children, full of life and energy, instead of these poor sentimental ghosts that are hopping around us.”

This was not an abstract concept for Catherine: “The Gospel represents Jesus Christ as a real, living, mighty Savior, able to save me now.” That same hope able to save her now was to be communicated to as many people in the way they can receive it: “Here is the principle—adapt your measures to the necessity of the people to whom you minister. You are to take the Gospel to them in such modes and circumstances as will gain for it from them a hearing.” Above all, she prayed that she would be found true, with the whole church, to the call of God: “We are made for larger ends than Earth can encompass. Oh, let us be true to our exalted destiny.” 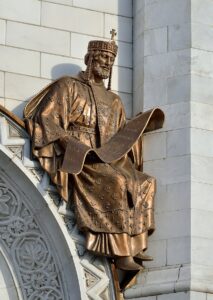 The marriage between Christianity and the state will always be tendentious. The benefits to both in the marriage are real as are the great costs. Constantine’s momentous step to bring the two into closer harmony must thus be received with a certain ambivalence. As one noted historian wrote of Constantine, “Zeal for the church did not absolve him of the harsh realities of power.”

As seen in Round 1 of this august competition, according to Christian hagiographers, Constantine’s rise to power came with a sign from God as he was preparing to engage Maxentius in battle at the Milvian Bridge. Outnumbered and overmatched, Constantine saw the chi-rho and was promised, “In this you will conquer.” Christian signs were erected on banners and painted on shields and Maxentius and his army were driven into the waters. For some Christian historians at the time, the similarities to the Pharaoh and his army thrown into the sea at the exodus was uncanny. There was hope for a new liberation.

Constantine set out to create space for the Christian minority. The Edict of Milan calls for toleration in religious practice, not just for Christians. One line reads, “…the open and free exercise of their respective religions is granted to all others, as well as to the Christians.” (Roberts-Donaldson, trans.) In this way, Constantine can be seen as an advocate for tolerance between and within a variety of religious traditions.

Unfortunately, Christians would not always cooperate. Constantine was dragged into conflicts within Christianity by bishops seeking the official endorsement of their positions. In an early conflict with the Donatists, Constantine tried more subtle forms of persuasion. The recalcitrance of the disputants led to a more heavy-handed approach at Nicaea. He summoned the bishops and lavishly supported the council. In the council itself, he likely had a hand in the homoousios formulation and later he would call Arius “the mouthpiece of Satan.” Certainly, his desire was for peace in the Roman Empire but it could be argued that his hope for unity in Christianity was for the sake of Christianity. And yet, any unity that is enforced by political coercion will be fundamentally distorted.

Constantine’s commitment to the church and his place as an emperor thus opens an important dialog about how power is wielded in Christianity. His prominence in the debate is a gift.

109 comments on “Catherine Booth vs. Constantine”