Dunstan vs. Maryam of Qidun

Hey, look! It's a saint a lot of people have heard of! But, as history would suggest, that means nothing in this annual clash of saints. Nonetheless Dunstan squares off against Maryam of Qidun (we were referring to Dunstan, obviously) in today's Lent Madness battle.

Yesterday, Marianne Cope erased Bartolomé de las Casas 65% to 35%, but only because we couldn't think of a saint whose last name was also a liturgical vestment. Believe us, there's no one named Charles Chasuble. We looked. 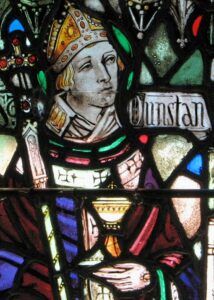 The history of the church in England, like that of the church worldwide, is not a story of continual growth but of constant invention and reinvention. Saint Dunstan’s great ministry was to preside over the reinvention of monastic life in England when its flame had nearly been extinguished by Viking invasions that began in the late eighth century.

Born to an influential family and raised in the household of his uncle, an Archbishop of Canterbury, Dunstan took a vocation to monastic life in 943, living at Glastonbury as a hermit within a five-foot by two-and-a-half foot cell. According to legend, he worked as a silversmith, a scribe, and a musician. Yet even as a hermit, his stature rose, and he became a fixture within the courts of Anglo-Saxon kings. Upon receiving two large inheritances, Dunstan used his newfound wealth for the restoration of monastic life in England. A political exile to Flanders proved to be transformative, as Dunstan encountered the Benedictine monastic revival.

When he returned to England after only a year of exile, Dunstan was ordained bishop of Worcester, then translated to be bishop of London, and ultimately in 960, he became Archbishop of Canterbury. He used his new influence and favor with the king to reform and restore abbeys at Glastonbury, Bath, and Westminster, among many others. Dunstan’s monastics were “contemplatives in action”—particularly focused on the immediate concerns of church and state. They regulated liturgical worship, revived monastic life for women, sought education and discipline among the clergy, and brought the church into closer alignment with the royal power instead of the power of local lords. The revived monasticism also valued the arts, scriptoria, and workshops within monasteries.

Soon after his death, Dunstan’s cult rose and grew to great prominence and was perhaps foremost in England until eclipsed by Thomas Becket in the thirteenth century; they shared a common site of pilgrimage at Canterbury Cathedral, where each was archbishop. Goldsmiths, jewelers and locksmiths claim him as their patron. Dunstan’s work to revive monasticism would be a defining work of the tenth century in England; that same century would prove to be the cradle of the next five centuries of English history.

Collect for Dunstan
Direct your Church, O Lord, into the beauty of holiness, that, following the good example of your servant Dunstan, we may honor your Son Jesus Christ with our lips and in our lives; to the glory of his Name, who lives and reigns with you and the Holy Spirit, one God, now and for ever. Amen.

Maryam of Qidun was a monastic woman with a story easily transformed into legend bordering on hyperbole. The scant, subjective information about her life leaves much to the imagination. Nonetheless, even when you remove all embellishment, we’re left with a woman worthy of our deep contemplation.

Maryam’s parents died when she was seven, and she went into the care of her uncle, Abraham, of Qidun, a desert village outside of Edessa, Turkey. Abraham was a monastic who gave his considerable wealth to the poor and lived the life of a hermit, entirely devoted to God. He raised his niece as part of his monastic cell, with him in an inner room and Maryam in an outer space. A small window between the rooms allowed Abraham to teach Maryam scripture and a rule of life, and they lived this way for twenty years.

One day, a man described as a monk “in name only” began to visit Abraham but set his intentions on Maryam. After a year of visits, the man convinced Maryam to leave her cell, at which point he “immediately contaminated and polluted her” due to his lust. Maryam immediately berated herself, believing herself unworthy of forgiveness. Considering her life over, she fled to a place where no one knew her and lived as a prostitute.

Abraham had two dreams that showed Maryam’s fate. After two years, he finally discovered her location, borrowed the clothing of a soldier so that he would not be recognizable, and set out to find Maryam. Once Abraham found her, he asked to meet with her and ultimately went to her bedroom. Abraham then revealed himself to her as her uncle, lamented her leaving, and begged her to return. Abraham convinced Maryam that she could confess her sin and God would forgive her, and they returned to their cell.

Abraham put Maryam in the inner room and himself in the outer enclosure. Her weeping and cries of penitence inspired people to visit her to cry out to God alongside her. Many people were blessed by her salvation.

Most of us are unwilling to publicly repent for our sins, let alone be willing to confess and submit our lives to God. Maryam reminds us that the repentance of others can help us in our need to be forgiven. Her greatest lesson and gift: no one is devoid of sin except for God.

Collect for Maryam of Qidun
O God, whose glory it is always to have mercy: Be gracious to all who have gone astray from your ways, and restore them again like your servant Maryam, that with penitent hearts and steadfast faith they might embrace and hold fast the unchangeable truth of your Word, Jesus Christ; who with you and the Holy Spirit lives and reigns, one God, for ever and ever. Amen.

Dunstan vs. Maryam of Qidun

173 comments on “Dunstan vs. Maryam of Qidun”