Nino of Georgia vs. Benedict the Moor

We conclude a rough-and-tumble week of saintly contests with Nino of Georgia vs. Benedict the Moor.

Yesterday, Isadora the Simple made Simeon the Holy Fool look foolish 54% to 46% to advance to the Saintly Sixteen. And, don't forget that one of the joys of this Lenten pop-up community may be found in the comment section on each post. You'll find limericks and camaraderie and heartache and joy and more information about the saints of the day. People may not always agree, but comments are always shared in the context of this collective journey towards the risen Christ.

Enjoy the weekend everyone, and we'll see you bright and early Monday morning as Henriette Delille takes on Absalom Jones. 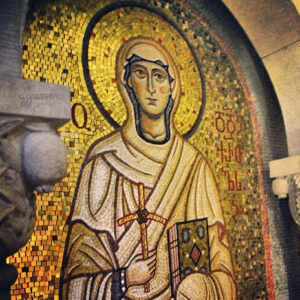 Born in 296, Nino (sometimes called Nina or Nune), is believed to be from a well-established and influential Christian family in the Roman province of Cappodocia.

She had a vision of the Virgin Mary, who told her to go to Caucasian Georgia, then known as Iberia, to preach the gospel. Legend held that Christ’s tunic had been taken to Georgia for safekeeping. In her appearance, Mary gave Nino a cross made of grapevines, with down-slanting arms. This is now a symbol of Georgian Orthodox Christianity—a fitting homage since Georgia is the site of the oldest wine-making tradition in the world.

Nino made a treacherous journey through Armenia and narrowly escaped death to arrive in Georgia. In the Armenian tradition, she is the sole survivor of thirty-five Christian virgins slaughtered by a hostile king. Roman Catholic hagiography holds that Nino arrived in the mission field as a slave.

In Georgia, Nino ministered to the royal household of King Mirian and Queen Nana, teaching and performing healing miracles. First, Nana converted, then her attendants, including the Jewish Sidonia, and lastly, Nana’s reluctant husband, who prayed to Nino’s God after he was struck blind. King Mirian named Christianity the official religion of his country in 326, making Georgia the second state, after Armenia, to formally adopt the young religion.

At Mirian’s request, Emperor Constantine sent clergy to Georgia to continue Nino’s teaching and spread of the gospel. In Mtskheta, Mirian began construction on the first Christian church in his country. The UNESCO World heritage site Svetitskhoveli Cathedral now sits on that site. In Georgian tradition, Christ’s seamless tunic is buried there.

Nino retired to Bodbe in eastern Georgia. She died soon after, around 338, and a monastery was immediately built in her name. It has survived the tumultuous history of the region in many forms and is now once again a monastery. In the late twentieth century, another monastery dedicated to Saint Nino was established in Phoka. A third, the Sacred Monastery of St. Nina, stands in Union Bridge, Maryland. It’s easy to see in the ministry of these devout Georgian women the strength, bravery, and industry of the saint they revere and emulate.

Collect for Nino of Georgia
Almighty God, who called your servant Nino to be your apostle to the people of Georgia, to bring those wandering in darkness to the true light and knowledge of you; Grant us so to walk in that light, that we may come at last to the light of your everlasting day; through Jesus Christ our Lord, who lives and reigns with you and the Holy Spirit, one God, for ever and ever. Amen. 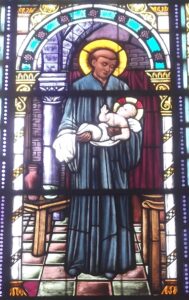 If ever there were an appropriate champion of Lent, it would certainly be Benedict the Moor, ofm (1526-1589). Also known as Benedict the African and Benedict the Ethiopian, he observed seven “Lents” every year throughout his life—a total of 280 days of the year spent in fasting and repentance.

Italians brought Benedict’s parents as slaves from Africa to Sicily, where he was born. Because of his parents’ obedient servitude, Benedict was granted his freedom at birth. As a young adult, Benedict joined a community of Franciscan hermits living in the hills of Sicily. He quickly grew in reputation, becoming one of the community’s leaders.

When Pius IV disbanded the communities of hermits, Benedict went with other monks to a nearby Franciscan monastery. There, his first work was as a cook, and his food was otherworldly! Angels were seen assisting Benedict in the kitchen as the food was multiplied to provide not only for the Franciscans but also for any visitors.

Benedict became known as a healer with the ability to read minds. So many people came for healing that Benedict got in trouble; he continued his ministry but hid in the bushes and healed visitors before they got into the monastery. The Franciscans admired Benedict’s humility and spiritual discipline, and they elevated the uneducated and unordained monk first to the position of master of novices and then guardian of the community, both positions usually reserved for priests at that time.

At the end of his life, Benedict accurately predicted the day and hour of his death. He was so respected and beloved that the people of Palermo declared Benedict the patron saint of the city shortly after his death. King Philip III financed the construction of an elaborate tomb for the simple monk.

Even in his death, Benedict served as a beacon of the Franciscan ideals of caring for those in need. He was formally beatified by the Vatican in 1743 and canonized in 1807. It can be no accident that at the height of the African slave trade—when African children were being bought and sold as chattel—the Roman Catholic Church chose to canonize a faithful Black European saint. That act made him the first person of African descent canonized by the Vatican.

Collect for Benedict the Moor
O God, you have brought us near to an innumerable company of angels, and to the spirits of just men made perfect: Grant us during our earthly pilgrimage to abide in their fellowship, and in our heavenly country to become partakers of their joy; through Jesus Christ our Lord, who lives and reigns with you and the Holy Spirit, one God, now and for ever. Amen.

Nino of Georgia vs. Benedict the Moor

110 comments on “Nino of Georgia vs. Benedict the Moor”