Aloysius Gonzaga vs. Thomas of Villanova

Happy Friday! The first full week of Lent Madness 2022 is nearly complete. Today we head back up to Confusion Corner as Aloysius Gonzaga tips off against Thomas of Villanova. If you're not a college basketball fan, this matchup may well seem rather confusing. Then again, if you're not a college basketball fan, the whole idea of a bracket competition may have initially been confusing.

Yesterday, Columbanus revved his way past Drogo 53% to 47% to secure a spot in the Saintly Sixteen against Madeleine Sophie Barat.

Enjoy your weekend. We realize that Lent Madness Withdrawal (LMW) is a real thing and we assure you of our...thoughts and prayers. But we'll be back at it first thing Monday morning as Perpetua takes on Cecilia. Go vote! 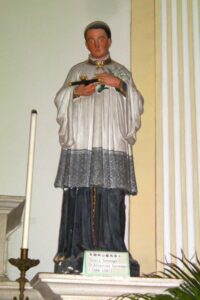 Aloysius Gonzaga, one of the great saints of the Jesuit order, was born to nobility in 1568. As was common among boys of his station, he was placed by his father on a path toward the life of a soldier; as early as age four, he began practicing the “art of arms,” learning how to fire miniature guns, bear a pike at the shoulder in military parades, and even how to set off a canon. Yet through it all, Aloysius Gonzaga’s piety was “precocious”—and fervent.

Aloysius found his tenacious faith amid the violence of the Italian Renaissance and the violent trajectory of his father’s chosen life for him. During his childhood, he witnessed the murder of two of his brothers. In his youth, he found a spiritual quickening. At a young age, he became ill with kidney disease, which would trouble him throughout his short life. During this illness, he fell in love with the lives of the saints and developed a discipline of prayer; after reading a book about Jesuit missionaries in India, he felt a call to religious life. By fourteen, he began thinking in earnest about forgoing his noble privileges to join the Jesuits. His mother agreed; his war-mongering father refused. But Aloysius showed bulldogged persistence; by 1584, his father relented, and the next year, Aloysius renounced his privileges and inheritances and became a Jesuit. Upon arriving at his cell, he said, quoting the psalms, that “this is my rest for ever and ever: here will I dwell, for I have chosen it.”

Aloysius’s health continued to cause problems. He made his final vows in 1587 and began preparations for ordination, but by 1590 he had a vision in which the Archangel Gabriel told him he would die within a year. In 1591, plague broke out in Rome, and Aloysius volunteered to care for the stricken. He worked to overcome his revulsion for the grotesque symptoms of the plague, throwing himself into his work. In time, he was removed for his health but reinstated because of his continued persistence to care for the ill. While assigned to a hospital without plague, he carried a man from his sickbed, only for that man to show the dreaded boils days later. Aloysius caught the plague and grew ill, dying only a few days after his twenty-third birthday, the name of Jesus on his lips. A Carmelite mystic, Maria Magdalena de Pazzi, described Aloysius Gonzaga as radiant in glory because of his “interior works,” a hidden martyr for his great love of God.

O God, whose blessed Son became poor that we through his poverty might be rich: Deliver us from an inordinate love of this world that we, inspired by the devotion of your servant Aloysius Gonzaga, may serve you with singleness of heart, and attain to the riches of the age to come; through Jesus Christ our Lord, who lives and reigns with you and the Holy Spirit, one God, now and for ever. Amen.

Tomás Garcia y Martinez was born in Spain in 1488 to a comfortable family. Both his parents were known for their charity to the poor and needy in their village. Thomas followed his parents’ examples of charity—sometimes to the extreme. He was often seen walking naked around town because he had given his clothes to the poor

Thomas was educated at the University of Alcalá and continued there as a popular professor of arts and philosophy. His love for God and care of the poor eventually led him to join the Augustinian religious order in 1516 and be ordained to the priesthood in 1518.

Known in academic circles for his absentmindedness, he was known among the people as the father of the poor. He wore the same robes he received in his novitiate his entire life, mending tears and worn places himself. He first refused the archbishopric of Granada, then was pressured into accepting the episcopacy in Valencia, a diocese that had not had a resident bishop for more than a century. He received a substantial amount of money from the cathedral to furnish his episcopal residence. He instead gave all the money to a local hospital. He explained that he knew God would be better served in that way. “After all,” he commented, “what does a poor friar like myself want with furniture?”

Poor people lined up each day at Thomas’s door, and each day he gave them bread, wine, money, and prayer. Many of Thomas’s fellow clergy criticized him, saying that people were taking advantage of him. Thomas replied, “If there are people who refuse to work, that is for the governor and the police to deal with. My duty is to assist and relieve those who come to my door.”

Thomas was an eloquent preacher, and his sermons encouraged the wealthy to accumulate charitable acts rather than monetary wealth. Holy Roman Emperor Charles V is rumored to have said that Thomas’s sermons could move stones to life. Thomas’s sermons also attacked the luxurious life of priests and bishops and the violence of bullfighting—no small criticism in Spain.

At the end of his life, Thomas willed all the money he possessed to be distributed to the poor. In 1555, mass was being celebrated in his presence as he was dying, and after he received communion, he breathed his last, reciting the words: “Into your hands, O Lord, I commend my spirit.”

Collect for Thomas of Villanova

Heavenly Father, Shepherd of your people, we thank you for your servant Thomas, who was faithful in the care and nurture of your flock; and we pray that, following his example and the teaching of his holy life, we may by your grace grow into the stature of the fullness of our Lord and Savior Jesus Christ; who lives and reigns with you and the Holy Spirit, one God, for ever and ever. Amen.

134 comments on “Aloysius Gonzaga vs. Thomas of Villanova”