In today's Saintly Smackdown matchup we have Columbanus vs. Drogo. 6th century Irish monk and missionary against a 12th century Flemish saint. Patron saint of motorcyclists vs. patron saint of coffee (not that these two things are mutually exclusive).

But on to today's vote! 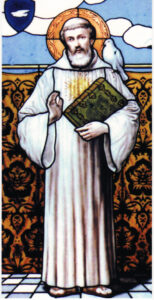 If you want to know about Saint Columbanus, there is no better source than the Sister Fidelma mysteries of ancient Ireland. But since the novels’ author, Peter Tremayne, isn’t a Lent Madness Celebrity Blogger, you’ll have to settle for this far-less suspenseful biography.

Saint Columbanus was born in Ireland in 540 CE and was well educated in grammar, rhetoric, and the scriptures. He wrote a commentary on the psalms and settled in at Bangor Abbey until the age of forty when he was given permission to travel to the European continent. He took twelve monastic brothers with him on his journey.

The life of Columbanus is that of an iconic missionary in early medieval Europe. He and his brothers were welcomed by various French rulers and given Roman ruins and castles to convert into monasteries. His task was to further the Christianization of Europe and uphold his vision of holy life. Each religious community he founded remained under his guidance and authority, and they followed a monastic rule of life similar to the Irish rule he’d taken as a young man.

Over his twenty years in Gaul, Columbanus became embroiled in various conflicts, from debate about the date of Easter to disputes with the royal family. At one point, he was kidnapped but escaped and fled to the Alps. Several times, he tried to flee by boat, but storms kept him landlocked. In the Alps, he found Christians who also prayed to local deities, and he preached to them, turning them from the practice. Columbanus traveled to Italy and preached against the teachings he considered heretical. In Italy, King Agilulf of the Lombards gave Columbanus isolated land called Bobbio, located south of Milan, and he built the Bobbio Abbey there.

While Columbanus spent much of his life founding monasteries on the European continent, he maintained his Irish identity. Historian Alexander O’Hara points to his importance in Ireland, with Columbanus being “the first Irish person that we have a body of literary work from.”

While the Benedictines celebrate Columbanus’s feast day on November 21, the wider church remembers him on November 23. Perhaps because of his many travels by land instead of by sea, he is the patron saint of motorcyclists.

Almighty God, whose will it is to be glorified in your saints, and who raised up your servant Columbanus to be a light in the world: Shine, we pray, in our hearts, that we also in our generation may show forth your praise, who called us out of darkness into your marvelous light; through Jesus Christ our Lord, who lives and reigns with you and the Holy Spirit, one God, now and for ever. Amen. 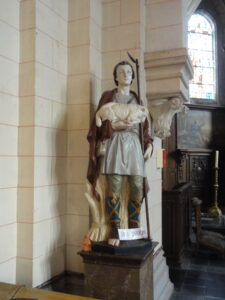 Until the age of online listicles, the powerful witness of Saint Drogo had been largely overlooked. But thanks to hipster baristas and coffee fiends everywhere, he has been brought back to the forefront of popular culture.

Like many other faithful disciples, Drogo was born into a family of means. However, even before his birth at the beginning of the twelfth century, his path shifted away from the life of ease. Before he was born, his father died. The second blow came soon after, when his mother died in childbirth. With two strikes against him, Drogo came into the world as an orphan, given to the care of family members. At 10 years old, he suffered another blow: Drogo discovered that his mother’s death was directly tied to his birth. A sensitive child, he held himself personally responsible for his mother’s death. As an adult, he renounced the inheritance he was entitled to from his parents and instead became a shepherd.

In the Flemish countryside, Drogo stood out among his peers due to his commitment to holy living. He was industrious and faithful, committed to both his work in the fields and worship of God. So committed, in fact, that he was known to do both at the same time. Locals described seeing Drogo in the fields praying while watching his flocks—at the same time he was also seen attending worship in the village. Perhaps bilocation, the ability to be in two places at once and accomplish twice as much in a day, led to Drogo being the patron saint of baristas and coffee shops.

Like many during this time, Drogo felt called to pilgrimage. And he was, again, an overachiever. He traveled to and from Rome a total of nine times over the course of nine years. At the end of those nine years, Drogo became ill. We don’t know what the illness was, but it caused a deformity in his body and appearance. That change in appearance brought another change in Drogo’s life. People are cruel, and Drogo was well-aware of the discomfort his new appearance caused in others. And, so, he took up the life of a hermit. Drogo lived the rest of his life in a solitary room attached to the local parish church. Drogo died on April 16, 1186, and was buried in the parish church in which he had spent the majority of his life. In addition to coffee, Drogo is the patron of people considered to be unattractive.

Almighty God, by your Holy Spirit you have made us one with your saints in heaven and on earth: Grant that in our earthly pilgrimage we may always be supported by this fellowship of love and prayer, and know ourselves to be surrounded by their witness to your power and mercy. We ask this for the sake of Jesus Christ, in whom all our intercessions are acceptable through the Spirit, and who lives and reigns for ever and ever. Amen.

149 comments on “Columbanus vs. Drogo”