Juliana of Liege vs. Blaise

And suddenly it was Friday. Welcome to the last matchup of another full week of first round matchups. Today, it's Juliana of Liege vs. Blaise. Medieval nun and mystic vs. bishop and martyr of the early church.

Yesterday, Oscar (aka Ansgar) swept past Felix of Burgundy 53% to 47% to make it to the Saintly Sixteen.

We'll see everyone first thing Monday morning as we prepare for our final three matchups of the First Round. First up, it's Emma of Hawaii vs. Hugh of Lincoln Then, on Thursday, we continue our journey with the start of the Saintly Sixteen. Onward! 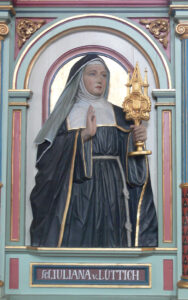 Juliana of Liege was a nun and mystic in twelfth-century Belgium. Like many of her fellow female monastics in Liege, she deeply revered the eucharist.

At five years of age, she and her twin sister, Agnes, were orphaned and taken to be raised in an orphanage adjacent to the double monastery outside of Liege, a city east of Brussels. Eight years later, she entered the order and worked at their hospice, caring for lepers. At the age of sixteen, she began to experience visions of a full moon crossed over by a dark stripe. She understood that the moon represented the church, and it was divided by an absence because it did not celebrate a feast of Corpus Christi.

Only a lowly nun, she initially kept her visions to herself, then shared them with a small group of women she trusted within the monastery. As she gained seniority and respect, she was elected prioress in 1225. She began to confide her visions to her confessor, Canon John, who counted as friend many influential clerics of the church, men who went on to become bishops, archdeacons, and even a pope (Urban IV). He shared her visions with these men, who agreed the idea of the feast was theologically sound. From there, Juliana and her friend Canon John began to compose the initial version of the Latin Office of the Feast of Corpus Christi. Some 700 years later, a composite manuscript containing this original office was discovered in the National Library of the Netherlands in the Hague by Belgian Benedictine Cyrille Lambot.

Juliana’s later life was one of upheaval as her monastery and indeed the whole church was caught up in conflicts between religious and political groups fighting for control of power and resources. Juliana was forced out of the monastery at Liege by an unscrupulous secular administrator. From there, she lived a wandering life moving between Cistercian houses. She died isolated from her friends in 1258.

Juliana’s liturgical work paved the way for Pope Urban IV to establish the Solemnity of Corpus Christi on the Thursday after Pentecost as a feast for the whole Latin Church. For this, she is counted not only as a saint but also one of the earliest female liturgists of medieval Europe.

Collect for Juliana of Liege

O God, by whose grace your servant Juliana of Liege, kindled with the flame of your love, became a burning and a shining light in your Church: Grant that we also may be aflame with the spirit of love and discipline, and walk before you as children of light; through Jesus Christ our Lord, who lives and reigns with you, in the unity of the Holy Spirit, one God, now and for ever. Amen. 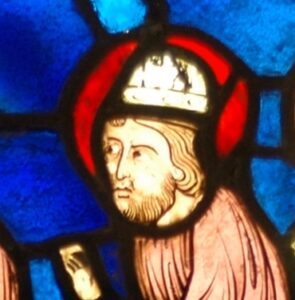 At first glance, when encountering Blaise among the church’s saints, it can be quite easy to cough, clear one’s throat, and skip ahead. Plenty of saints have plenty of legends, and a lesser-known saint can be easy to pass over. Yet Blaise’s witness and the observation of his feast reveals a curious history.

Saint Blaise was believed to have been the bishop of Sebaste in historical Armenia (modern-day Turkey) in the early fourth century. He was martyred in the final stages of the Great Persecution under Emperor Licinius, making Blaise a victim of superbly unlucky timing—that same emperor, together with Constantine, would ultimately author the Edict of Milan in 313 CE granting toleration to Christians in the Roman Empire.

Blaise was born to noble parents, raised as a Christian, and, according to legend, was made a bishop at a young age. During the persecution, Blaise withdrew to a mountain cave under the guidance of the Holy Spirit, where he lived among and blessed sick and wounded animals. Blaise is best remembered for the occasion when a mother brought him her young boy, who was choking from a fishbone lodged in his throat and near death. At Blaise’s hands, the child was healed and restored to health. The same woman later brought Blaise food and candles when he was imprisoned for his faith. Ultimately, Blaise was ordered tortured with iron combs to the skin and beheaded.

The intercession and healing of the young boy would later place Blaise among the Fourteen Holy Helpers, saints and healers of the church to whom the faithful would pray with particular devotion during the bubonic plague of the fourteenth century. Given his manner of death, Blaise is also kept as the patron saint of wool combers and the patron for the cure of cattle diseases. Blaise’s feast is kept on February 3, and owing to his healing of the young boy, the blessing of throats is a practice kept on that day. Those with throat diseases (or those whose throats may be particularly subject to use, such as singers and choristers) are blessed by the placement of two candles crossed at the throat, with the prayer: “through the intercession of Saint Blaise, may God deliver you from maladies of the throat and from all other evil.”

Almighty and everlasting God, who kindled the flame of your love in the heart of your holy martyr Blaise: Grant to us, your humble servants, a like faith and power of love, that we who rejoice in his triumph may profit by his example; through Jesus Christ our Lord, who lives and reigns with you and the Holy Spirit, one God, for ever and ever. Amen.

67 comments on “Juliana of Liege vs. Blaise”