Melania the Elder vs. Hilary of Poitiers

Welcome back! We hope you're ready for the first full week of Lent Madness action. Today, we head up to the Confusion Corner quadrant of the bracket as Melania the Elder faces Hilary of Poitiers. What's not confusing is that both of our contestants come to us via the 4th century. Spanish nun vs. French bishop.

On Saturday, Madeleine Sophie Barat slipped past Mesrop Mashtots 53% to 47%. We also test drove a new voting system which most, but not everyone, was able to successfully navigate. Thanks to everyone for your forbearance as we seek to balance security with ease of voting. With some tweaks, it should be smoother today.

Now back to voting! 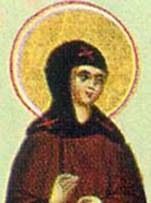 Melania the Elder was born in Spain in the fourth century to a wealthy Roman family. When she was fourteen, she married (most likely, the Roman prefect Valerius Maximus) and moved to Rome. When she was 22 years old, her husband, probably many years older than she was, and two of her three children died within months of each other. Shortly thereafter, she sold her possessions and left for Egypt to adopt an ascetic life. She left her surviving son in the care of a guardian.

Melania (along with Rufinus Aquileia, her monastic companion) ultimately found her way to Jerusalem. While there, she established a monastery for 50 monastic women and funded the monastery founded by Rufinus. She and Rufinus worked closely together until around 400 when she returned to Rome to be with her son and his family. While in Rome, she had a deep impact on her granddaughter, Melania the Younger, who would ultimately follow in her ascetic footsteps.

Melania the Elder was one of the more scholarly and learned ascetic women of her time. She was known to esteemed theologians such as Evagrius Ponticus and Augustine of Hippo. She was a student of theology and studied Origenism extensively. Origen (also a fellow Lent Madness contestant) was a third-century theologian whose writings became a lightning rod at the end of the fourth century. As the Origenist controversy roiled the church, Melania worked both to defend Origenism as well as to promote unity. Saint Jerome’s early praise of her and later vitriol directed toward her perhaps best illustrates her intellectual prowess and the threat that she posed to his own theological sensibilities.

In addition to her scholarly work, Melania also financially supported and promoted monastics throughout her life. In addition to the monasteries that she founded and funded in Jerusalem, she offered regular support to other monastics as various theological controversies regularly shifted balances of power. Melania the Elder returned to her ascetic life in North Africa before finally journeying back to Jerusalem where she died in 410. She left a considerable endowment to support the continued work of the monastery that she established there.

Collect for Melania the Elder

Most High and Merciful God, who called your servant Melania to forsake earthly comforts in order to devote herself to studying the scriptures and to welcoming the poor: Instruct us in the ways of poverty and the grace of hospitality, that we might comfort those who have no place to rest and teach the way of your love; through Jesus Christ our Lord. Amen. 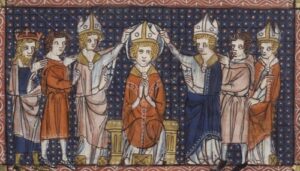 Hilary may have been a leader of the church more than 1,700 years ago, but his keen understanding of the Trinity along with his profound teachings remain hallmarks of Christianity today.

Born in 310 CE in Poitiers, France, Hilary was a highly educated son of pagan parents. His study of both the Old and New Testaments led to his conversion to Christianity.

He was unanimously elected bishop of Poitiers in 350. He came into authority during a deep dispute and quickly became embroiled in a controversy about the Trinity: he supported Athanasius’s understanding of the Trinity and the full divinity of the Son. Unfortunately, this position put Hilary out of favor with Emperor Constantius II, who, in 355, ordered all bishops to sign a condemnation against Athanasius. Hillary refused, which prompted a four-year exile to Phrygia, located in modern-day Turkey.

He was not idle in exile. Hilary continued to function as bishop to his diocese, writing two of his most important books, an epistle, and many letters to leaders throughout the church. Among his many achievements, Hilary introduced Greek doctrine to Western Christianity. He was a prolific writer, including the critically important book, De Trinitate (On the Trinity). Three hymns are attributed to Hilary, including “Hail this day’s joyful return,” found in the 1982 Hymnal.

Hilary’s legacy is far-reaching, with Saint Augustine of Hippo calling him “the illustrious doctor of the churches,” and Saint Jerome considering him “the trumpet of the Latins against the Arians.” Pope Pius IX named Hilary a doctor of the church in 1851, one of only 36 doctors of the church, so named in recognition of his significant contributions to theology. He is considered the patron saint of lawyers. Hilary died in 367 in the same city where he was born, and his feast day is celebrated on January 13.

Hilary’s depth of understanding about the existence of God is exemplified in one of his more famous quotations: “There is no space where God is not; space does not exist apart from Him. He is in heaven, in hell, beyond the seas; dwelling in all things and enveloping all. Thus He embraces, and is embraced by, the universe, confined to no part of it but pervading all.”

Collect for Hilary of Poitiers

Keep us steadfast, Lord God, in that true faith that we professed at our baptism; that, like your servant Hilary of Poitiers, we may rejoice in having you for our Father, and may abide in your Son, in the fellowship of the Holy Spirit; for you live and reign for ever and ever as one God in Trinity of Persons. Amen.

287 comments on “Melania the Elder vs. Hilary of Poitiers”