Congratulations! You’ve officially made it through the first matchup of Lent Madness 2022. And, like a slow rolling Lenten train, the battles just keep on coming. Today it’s Olaf vs. Kateri Tekakwitha as we pit an 11th century Norwegian king against a 17th century Native American saint. It’s called Lent “Madness” for a reason, after all.

In yesterday’s Opening Day matchup, amid heavy voter turnout, Stephen outlasted Wenceslaus 54% to 46% to become the first saint to make it to the Saintly 16. When last seen, Wenceslaus was overheard demanding someone, “Bring me flesh and bring me wine.” We wish him well.

The first day of Lent Madness 2022 also found the Supreme Executive Committee having to deal with some voter fraud (seriously). At 10:30 pm we removed approximately 600 votes from Wenceslaus, all from a single address. This wasn't enough to tip the scales, but is a good reminder to vote once or face being banned to the outer Lent Madness darkness where there is weeping, gnashing of teeth, and no brackets. Be passionate, vote once, don't be a jerk.

Note that tomorrow is the ONLY weekend battle of Lent Madness 2022 as Mesrop Mashtots takes on Madeline Barat. From then on, Lent Madness will only take place on the weekdays of Lent. Now go vote! 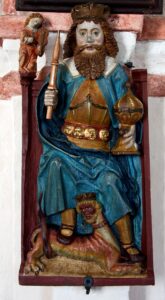 Olaf II Haraldssön, also known as Olaf the Stout, was born in 995 of royal lineage. In his short 35 years of life, he was able to unite Norway and help spread Christianity across the land. Olaf’s early years were spent leading small bands of raiders in various conflicts against Danes. In one of the conflicts, he and his men are said to have brought down the London Bridge (thus inspiring the children’s song we all know and love). In 1013, Olaf was staying with Richard II of Normandy and was converted to Christianity. He was baptized by Richard’s brother, the Archbishop of Normandy, Robert the Dane. Shortly thereafter he experienced a call to return to Norway to unite it under Christianity.

He returned to Norway and brought nobles together under his leadership and became king of Norway in 1015, a position he held until 1028. He then proceeded to establish Christianity among the people using missionaries from England. His methods of conversion led to unrest in his subjects that would ultimately lead to his loss of power. Prior to losing his throne, he did manage to establish his Religious Code in 1024 and insisted that all laws be Christian laws. The brute enforcement of these laws, however, further weakened his power. In 1028, he was forced to abdicate the throne, and he fled to Russia.

The following year, he felt the call to reclaim his position and built an army to take back the throne. He was killed in 1030 in an ensuing battle. Tales of miracles abound about Olaf in that final battle and in the area around his burial place. These led to the exhumation of his body. When his grave was opened about a year later, it is said that the body smelled sweet, and his hair and nails had grown longer. He was quickly remembered as a saint and was one of the last saints to be canonized by both the Eastern and Western Church prior to the Great Schism.

His canonization inspired many of the Norse to convert to Christianity. To this day, he is a symbol of Norwegian independence and pride. After Mary, he is the most commonly depicted saint in medieval Norwegian art. His feast day is celebrated on July 29.

Almighty God, you have surrounded us with a great cloud of witnesses: Grant that we, encouraged by the good example of your servant Olaf, may persevere in running the race that is set before us, until at last we may with him attain to your eternal joy; through Jesus Christ, the pioneer and perfecter of our faith, who lives and reigns with you and the Holy Spirit, one God, for ever and ever. Amen. 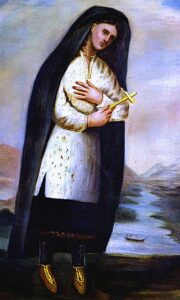 “The narratives surrounding Saint Kateri are fascinating and, at times, contradictory,” writes Yakama scholar Michelle M. Jacob of Kateri Tekakwitha, the first Native American saint recognized by the Roman Catholic Church. That might be an understatement.

Kateri Tekakwitha’s story is best known from the narratives of two Jesuit priests who knew her, Pierre Cholenec and Claude Chauchetiere. According to the priests, Tekakwitha was born around 1656 to a Mohawk father and Algonquin mother in what is now Auriesville, New York. Four years later, she was orphaned by the smallpox epidemic.

Tekakwitha survived the disease, but it left her face disfigured and her eyes sensitive to light. She hid her face and shielded her eyes by veiling her head with a blanket. She was baptized when she was about 19 years old after Jesuit priests came to her village.

At her baptism, she took the name Catherine—or its Mohawk approximation, Kateri—from Saint Catherine of Siena. In the priests’ telling, her community didn’t take kindly to Kateri Tekakwitha’s newfound faith, and she soon left for a Jesuit mission south of Montreal called Kahnawake. At the mission, Kateri Tekakwitha famously asked the question, “Who will teach me what is most agreeable to God so that I may do it?” She also engaged in severe and disturbing penances, which likely accelerated her death at age 24 in 1680.

Native Christians have, in recent years, offered varying stories about Kateri. Mohawk historian and author Darren Bonaparte points out that the priests ignored that Kateri Tekakwitha was “a part of her culture, and a valued one at that.” She has the distinction of being the first weaver of wampum belts mentioned by name in recorded history. Jacob, the Yakama scholar, explores ways Native Christians continue to claim and be inspired by Kateri Tekakwitha.

For many, the saint “transforms Catholicism and provides Indigenous peoples and their allies with meaningful ways to center Indigenous culture within their spiritual practice”—a form of decolonization.

Kateri Tekakwitha was canonized in 2012. She is considered patron saint of the environment and of people in exile, and her feast day is celebrated on July 14.

Almighty and everliving God, who opened the heart of Kateri Tekakwitha to receive the Good News of Jesus Christ and to devote her life to your service: Grant us the same zeal of devotion to persevere in faith through the trials and tribulations of our lives, through Jesus Christ our Lord. Amen.

198 comments on “Olaf vs. Kateri Tekakwitha”