Happy Monday! We hope you're ready for another full week of rough and tumble saintly action. We kick things off with Perpetua vs. Cecilia as we head into the early third century.

Last week concluded with Thomas of Villanova routing Aloysius Gonzaga 72% to 28%, in the most lopsided matchup to date. No word on how this will impact this year's NCAA basketball tournament.

And since it's Monday, stay tuned for today's episode of Monday Madness which will be released later today. 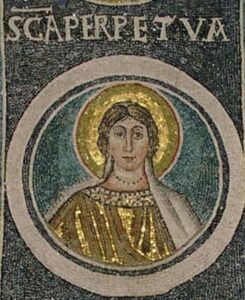 Perpetua, along with other Christian catechumens, was arrested in 203 CE in Thurburbo Minus, just west of Carthage (modern-day Tunisia). Prior to the arrest, not much about Perpetua is known. Once she was arrested, however, she kept a journal of her experience in prison and during the trials that ultimately culminated in her martyrdom. Portions of her journal survive to this day in the text of The Martyrdom of Saints Perpetua and Felicitas. Those journal entries may be the earliest extant Christian writings authored by a woman.

The journal narrates how Perpetua, a young 22-year-old mother of a nursing infant, repeatedly resisted pressure from her family to recant her faith. In the interactions, we see her father’s deep love and anguish for his daughter and her steadfast commitment to the Christian faith. Their tense exchanges are a sort of practice for her before she faces the regional governor. In each interchange, she states succinctly and clearly, “I am a Christian.” When she repeats the same before the Roman Emperor’s regent in court, she is condemned to death by wild beasts in the arena.

There is a certain humanity to her journals. In one entry, she narrates how her son was taken from her and given to her family. She expresses relief that her son did not go through the normal challenges of being weaned and is grateful that she herself did not experience pain in the process. It is noteworthy that her child is given to her family rather than to the father of the child and his family. One wonders if he was the one who turned her and her friends over to the authorities.

Throughout the journals, Perpetua also narrates visions and dreams she experienced while in prison. The visions give Perpetua agency and courage to stand fast in her faith. She embraced her fate and during games commemorating the fourteenth birthday of Geta, the younger son of the Roman Emperor Septimus Severus, she and the other catechumens were sent to the arena. In the arena, a wild heifer was set upon her and Felicitas (somehow under the logic that a female animal should be used to kill women). They survive the assault, with Perpetua in an ecstatic state, only to be killed by the sword in an anticlimactic execution.

O God, the King of Saints, who strengthened your servants Perpetua, Felicity, and their companions to make a good confession and to encourage one another in the time of trial: Grant that we who cherish their blessed memory may share their pure and steadfast faith and win with them the palm of victory; through Jesus Christ our Lord, who lives and reigns with you and the Holy Spirit, one God, now and for ever. Amen. 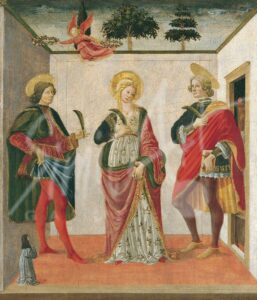 Cecilia has both inspired—and broken—the hearts of musicians, from George Frideric Handel to Paul Simon.

The patron saint of musicians was born into a noble family sometime around 200 CE in Rome. She grew up in the Christian faith and vowed as a young girl that she would remain a virgin. Still, when her parents arranged her marriage to a man named Valerian, she didn’t run away. Instead, Cecilia sang. The Golden Legend—a collection of stories of the saints read widely in late medieval Europe that paved the way for Lent Madness—recounts that when Cecilia heard the music begin at her wedding, she “sang in her heart, only to God, saying: O Lord, I beseech thee that mine heart and body may be undefouled so that I be not confounded.”

When her new husband approached her to consummate their marriage, she told him that an angel watched over her, and if he were to touch her, the angel would slay him. Unconvinced, Valerian told her to prove it. So, she told him to go to a place outside the city, where he would find Pope Urban among the poor, and ask the pope to baptize him. Only then would he see the angel. Valerian found the pope just as Cecilia described, was baptized, and returned home to find his wife indeed speaking with an angel, according to The Golden Legend. The angel crowned them both with roses and lilies and told them to keep their crowns and chastity.

The couple later converted Valerian’s brother, Tyburtius, to Christianity. The brothers became known for burying the remains of Christian martyrs and giving all they owned to people in need before they were martyred themselves. After burying her husband and brother, Cecilia was called before the Roman prefect Almachius. After sassing Almachius and refusing to offer a sacrifice to the Roman god Jupiter, she was sentenced to death. Her executioner struck her neck three times with a sword, but her head remained attached and Cecilia alive. For three days, she continued to preach and convert many people before she died.

Cecilia has been revered for centuries in poetry, art, music, and a number of Christian traditions, and her feast day on November 22 is celebrated with concerts and music festivals around the world.

Almighty and everlasting God, who chooses those whom the world deems powerless to put the powerful to shame: Grant us so to cherish the memory of your youthful martyr Cecilia, that we might share her pure and steadfast faith in you; through Jesus Christ our Lord, who lives and reigns with you and the Holy Spirit, one God for ever and ever. Amen.

143 comments on “Perpetua vs. Cecilia”