Welcome to the opening matchup of Lent Madness 2022! If you’re joining us for the first time, we’re delighted you’re along for this wild, saintly ride. If you’re

curious about what this all entails, check out the About Lent Madness tab on the website.

To experience the fullness of Lent Madness, the Supreme Executive Committee (the somewhat benevolent dictatorship that runs this whole enterprise) encourages you to do a couple things. First, like Lent Madness on Facebook and/or follow us on Twitter. Second, subscribe to the Lent Madness e-mails so you never miss a vote — you’ll get each matchup hand-delivered to your inbox on the weekdays of Lent. You can do this by going to the home page of our website and entering your e-mail address.

But mostly, we encourage you to read about the 32 saints participating in this year’s edition of Lent Madness, faithfully cast your (single!) vote on the weekdays of Lent, and add your comments to the great cloud of participating witnesses that gathers as the online Lent Madness community each year. It's true that this is the only place on the internet where reading the comments is actually edifying.

If you’re wondering when your favorite saint will be competing – in order to rally your friends and neighbors (creative campaigning is encouraged, voter fraud is not) – you can check out the 2022 Matchup Calendar. And if you'd like to see all 32 saints (plus Tim and Scott) represented in peg doll form, check out this AMAZING video from our friends at St. James Cathedral in South Bend, Indiana.

Things kick off with a matchup that may just leave you humming a certain Christmas carol, as Stephen faces off against Wenceslaus. Friends, it's time to cast your very first vote of Lent Madness 2022! We’re glad you’re all here. Now get to it! 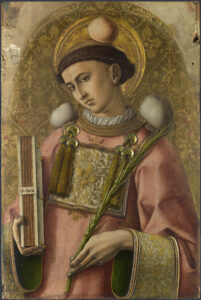 Along with six other Greek-speaking believers, Stephen was selected to be a deacon in the Greek-speaking Christian community in Jerusalem, tasked with serving and providing for those in need. In some traditions, Stephen is identified as the eldest of these first deacons and given the title of archdeacon.

Set to the task of providing for the poor, Deacon Stephen also kept busy performing “wonders and signs” among the people. As is often the case, compassion was met with anger—as was his teaching and preaching—and Stephen was brought before the Sanhedrin as a criminal.

Arguing for his life, Stephen could have chosen the easy path. Instead, he spoke truth to those who held power. He preached a sermon that accused his listeners of murdering the prophets who foretold the coming of Jesus. This went over like a lead balloon.

The authorities immediately took Stephen out and stoned him. Stephen became the protomartyr; the first follower of Jesus to give up their life for the sake of the gospel. And in his death, there resounded echoes of the death of Jesus as Stephen used his last breath to pray for the forgiveness of his killers.

In life, Stephen’s story is tied to Jerusalem, but in death, Stephen has been a world traveler. At various points in time, Stephen’s remains have rested in both Jerusalem and Rome. In Jerusalem, one of the major gates to the city still bears his name. In Rome, it is said that the remains of another deacon, Lawrence, miraculously moved to make room for the first archdeacon of the church.

Collect for Stephen
We give you thanks, O Lord of glory, for the example of the first martyr Stephen, who looked up to heaven and prayed for his persecutors to your Son Jesus Christ, who stands at your right hand; where he lives and reigns with you and the Holy Spirit, one God, in glory everlasting. Amen 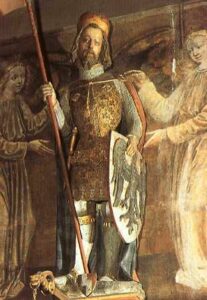 Most of us are familiar with Good King Wenceslaus who goes out on the snowy evening of December 26. But Saint Wenceslaus was not a king, nor did he likely venture out on the feast of Stephen in deep snow. He was, however, a deeply faithful Christian whose life set the standard for a godly ruler for centuries to come.

Wenceslaus was born in Bohemia (modern-day Czech Republic) in the early 900s. His grandparents and his father, the Duke of Bohemia, were faithful Christians, but his mother, Dragomir, remained a staunch devotee of pagan faith. When Wenceslaus was 13, his father died. His Christian grandmother Ludmilla became regent and guardian of Wenceslas, but Wenceslaus’s mother murdered Ludmilla and took control of the government. She instituted harsh penalties against Christians in Bohemia and tried desperately to convert her son to the pagan ways. When Wenceslaus came of age, he banished his mother and took control of the government himself.

Wenceslaus took a vow of chastity and worked tirelessly to share the Christian faith with his subjects. As a leader, he preferred diplomacy to war. One legend holds that as his army faced a challenger, Wenceslaus sent an offer of peace. His opponent viewed the peace offering as a sign of weakness and prepared to attack. Wenceslaus offered to fight his opponent one-on-one to avoid massive casualties. As the two men walked toward each other, his opponent saw two angels guarding Wenceslaus. His opponent wisely chose Wenceslaus’s offer of peace.

Wenceslaus’s brother Boleslav was threatened by this modernization and Christianization of Bohemia. On September 28, 935, as Wenceslaus entered a church to attend mass, Boleslav murdered Wenceslaus by running him through with a lance. Almost immediately, Wenceslaus was venerated as a martyr. Reports of miracles occurring at his tomb led Boleslav to relocate the bones to St. Vitus Cathedral in Prague. Wenceslaus was promoted to kingship posthumously by Holy Roman Emperor Otto I. The Crown of Wenceslaus became the symbol for Czech independence. Within decades of his death, hagiographies, or biographies of saints, of Wenceslaus were popular and established the model for the righteous king, whose power is rooted in piety.

Collect for Wenceslaus
Almighty God, you gave to your servant Wenceslaus special gifts of grace to understand and teach the truth as it is in Christ Jesus: Grant that by this teaching we may know you, the one true God, and Jesus Christ whom you have sent; who lives and reigns with you and the Holy Spirit, one God, for ever and ever. Amen.

UPDATE: At about 10:30 EST, we removed just over 600 votes from Wenceslaus due to some cheating. Remember that we encourage you to vote once and once only. Voting too many times gets you banned from the Saintly Smackown.

Posted in:
First Round, Lent Madness 2022

277 comments on “Stephen vs. Wenceslaus”