Rose of Lima vs. Brigid of Kildare

Congratulations on surviving another weekend without Lent Madness! If it's easier to make it through these dark days, just think of it as a Lenten devotion within a Lenten devotion. At least this past weekend you were able to get your Lent Madness fix by reading about it in the Washington Post, Toledo Blade, and St. Louis Post-Dispatch. And if you're among the large contingent of those who prefer to read about Lent Madness in Portuguese, it was featured in Gospel Prime (we think they said flattering things but we really have no idea).

The Supreme Executive Committee of Lent Madness also replied to a letter from a young girl who couldn't believe that St. Nicholas lost to Evelyn Underhill last week. Read the letter and response in "Yes, Virginia, there is a St. Nicholas."

After today's match-up featuring two female monastics, we only have two more battles left before the start of the Round of the Saintly Sixteen. Check out the updated bracket and the calendar of upcoming battles and then go vote! 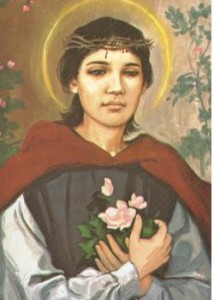 Rosa de Lima (1586 – 1617) was born in Lima, Peru, the daughter of Gaspar Flores, of Puerto Rico, and Maria de Oliva, of Lima. Her Christian name was Isabel (Elizabeth) and she took her nickname "Rose" at the time of her confirmation.

As a young girl she copied Catherine of Siena in fasting and penances (though unlike Catherine, she didn't lose to Emma of Hawaii in Lent Madness last week). As she aged and some in her family's social circle started to comment on her growing beauty, Rose cut off her hair to the great consternation of her father. While her family did not approve of her strong devotion and determination not to marry, her father eventually gave her a room to herself in the family home.

While a young adult, Rose spent her days helping the sick and hungry, selling her fine needlework for others, and growing flowers to support her family. She spent her nights in prayer and, though her father forbade her from becoming a nun, Rose joined the third order of Saint Dominic when she was twenty years of age.

She suffered excruciating agony of mind and desolation of spirit but maintained a strong hope and faith in the midst of this. Rose died at the age of 31 and, in an extraordinary gesture, was eulogized by the archbishop at her funeral in the Cathedral. Rose of Lima was the first person born in the Americas to be named a saint by the Roman Catholic Church.

Collect for Rose of Lima: Merciful God,  for love of you  Rose of Lima took up the cross and embraced suffering;  may we learn from her  to regard material possessions lightly  and to show the radiance of your love to all we meet;  for the sake of Jesus Christ our Saviour who is alive with you in the unity of the Holy Spirit, one God, now and forever. Amen. 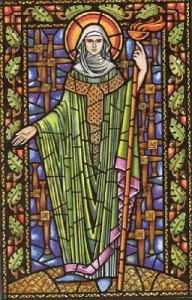 The life of Brigid of Kildare straddled the end of the fifth and beginning of the sixth centuries as well as Ireland’s historical moment when Druidism gave way to Christianity. Born of a slave mother to Dubhthach, the poet laureate of the king, Brigid grew up in a Druidic household, but was herself always drawn to the God revealed in Jesus Christ.

Brigid became a nun and, in 470, founded the nunnery at Kildare. In another straddling of the line between Druidism and Christianity, the site was the location of a cult to a pagan goddess whose sacred fire was constantly maintained. Brigid’s nuns took over the maintenance of this fire and Brigid slowly claimed the flame for God’s use alone. In a remarkable and unprecedented move, Brigid invited the monk Conlaed, along with his brothers, to join her at Kildare, making it the only double monastery of men and women in Ireland. Kildare became a place of learning, and it produced some of the most beautiful illuminations of the Bible ever created; sadly, these have all been lost. In her role as abbess, Brigid had as much power as many men in Ireland, and she wielded it with wisdom and compassion.

Many of the miracles attributed to Brigid happened in her response to the poor and sick. Following the Lord’s example, she cleansed lepers and restored sight to the blind. As her fame spread, she took on the mystique of a folk hero, making the fanciful and factual stories about her difficult to separate. But one thing is sure: Brigid’s contagious Christianity led many to move away from Druidism and toward Jesus Christ. While this process was slow, her influence brought a legitimacy to Christianity superseded only by Saint Patrick’s. In a final straddling of Druidism with Christianity, her feast day is February 1, which coincided with (and then supplanted) the Celtic festival of Spring, called Imbolg.

To this day, she is beloved through Ireland, and is numbered with Patrick and Columba as Ireland's primary saints. Her remains are buried with these two at Downpatrick. Brigid is affectionately known as “Mary of the Gael.”

Collect for Brigid of Kildare: Everliving God, we rejoice today in the fellowship of your blessed servant Brigid, and we give you thanks for her life of devoted service. Inspire us with life and light, and give us perseverance to serve you all our days; through Jesus Christ our Lord, who with you and the Holy Spirit lives and reigns, one God, world without end. Amen.

Rose of Lima vs. Brigid

83 comments on “Rose of Lima vs. Brigid of Kildare”