The road to the 2013 Golden Halo continues on this All Saints' Day with our second of four Play-In matches (during August's General Convention in Indianapolis you'll recall Gregory the Great trounced Gregory of Nyssa to make it into the bracket). This battle pits two 16th century musicians against one another in the form of Thomas Tallis and John Merbecke.

The polls will be open from 8:00 am on All Saints' Day until 8:00 am on All Souls' Day (that's tomorrow in case you don't speak Liturgical Calendar). Only one will live on in harmony as the other is cast into the outer dissonance. The winner will take on Janani Luwum in the First Round -- but not until sometime in early Lent.

Today's Celebrity Bloggers are Lent Madness veteran Penny Nash (Merbecke) and Laurie Brock (Tallis). Laurie is making her Celebrity Blogger debut (please send her congratulatory notes by telegram or morse code as this is one of the biggest days of her entire life).

And if you haven't already done so, be sure to "like" the Lent Madness Facebook page. There's no reason why we shouldn't have 2,000 likes by Lent (less than a hundred to go!). 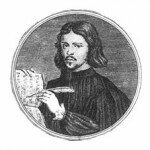 1.  Thomas Tallis is considered the father of English Church music since the Reformation. Apparently the spot for pre-Reformation church music father is still open, but Tallis has the post-Reformation spot. Take that, Merbecke.

2.  Tallis wrote the quite cleverly titled Tallis Canon, allowing Episcopalians to sing something besides, "Row, Row, Row Your Boat" in a round.

3. We don't know when he was born, we don't know if he did or didn't sing with the Chapel Royal of St. James Boys Choir, we have no idea what he really looked like, and we really don't know how to spell his last name -- the one copy of his signature we have shows Tallys. Yet he's still up for Episcopal sainthood. He's awesome enough to be a saint, even if he completely failed the background check.

4.  His talent and political maneuvering brought him to the Chapel Royal, which served as the personal choir for the British monarch. Yep, you read that right. The kings and queens of England have their very own personal choir to sing at their command, sort of like the final 10 of American Idol, and Tallis -- or Tallys -- was awesome enough to be a part of this group.

5. Tallis taught, composed, and performed for Henry VIII, Edward I, Mary, and Elizabeth I and their courts and managed not to get himself executed.  Few musicians past or present have the ability to compose and perform in the style that suited the ever-changing tastes of monarchs, but Tallis did, and we all know the taste and styles of the Tudor monarchs varied drastically. Really drastically. Like beheaded or burned at the stake drastically.

6.  Tallis and his business partner William Byrd held the Crown Patent for the printing of music and lined music paper for twenty-one years. If you wanted to print music or get paper to write down your compositions in Tudor England, guess who you had to shmooze? Yep, Thomas Tallis.

7. Tallis' most well-known compositions, Spem in Alium, a sacred motet expressing humanity's eternal hope in God, is featured on the soundtrack of Fifty Shades of Grey.

8.  Yes, you read that right. How could you not want this guy who survived four high-strung monarchs; the liturgical music swing from Roman Catholic to English Protestant back to Roman Catholic then finally to Anglicanism; and is still hip and cool enough to be a featured composer in one of the best-selling books of this year? (okay, yes, I KNOW what the book is about).

9.  Being one of the greatest English composers didn't matter to laborers at St. Alfege Church, where he was buried. They discarded his remains.  Oops.  Doesn't that make you want to vote for him out of pity?

10.  How could you not vote for a guy who composed this: 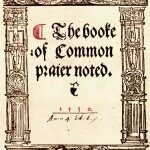 10. He was asked by Thomas Cranmer to write service music for the 1549 (i.e., the first) Book of Common Prayer, insisting that it be singable and that every syllable should have only one note. The music was to encourage the people to participate fully in the service. Merbecke’s work was called The Booke of Common Praier Noted (i.e., set to music), is considered the “foundation of solemn musical service of the Church of England,” and is still in print.

9.  Although the use of service music fell away by the time of Queen Elizabeth, Merbecke’s service music, like many other wonderful aids to the beauty and wonder of the liturgy (such as candles, incense, and vestments, not to mention holiness and a zeal for mission) was rediscovered during the Oxford Movement and is still used in Anglican and Episcopal churches today.

8.  He was a double agent! He lived a super secret double life during the time of Henry VIII because of his increasing protestant sympathies even while he was serving as organist at the King’s Royal Chapel and Henry just wanted the Church to be the Church IN England, not a separate and reformed Church OF England.

7.  He was almost martyred when this secret double life was revealed. He was charged with heresy, on account of possessing the writings of John Calvin and for his work at writing an English Bible Concordance, and condemned to death. He was, however, saved from being burned at the stake by Bishop Stephen Gardiner, that same bishop so hated by Thomas Cromwell for his Roman sympathies in Hilary Mantel's Booker Prize-winning novels Wolf Hall and Bring Up the Bodies.

6.  Unlike some other musicians of the day *cough* Thomas Tallis *cough*, Merbecke was not only a musician but a theological writer. His Bible Concordance, the first of its kind in the English, and one of the causes of his arrest, was published in 1550.

5.  New studies of Merbecke find that he was not only (or simply) a copyist and composer but also a Renaissance humanist whose music was “an Anglican epitome of the Erasmian synthesis of eloquence, theology, and music.”

4.  Thus, Merbecke’s life was spared because he was a “mere musician.” But in fact, his work was about spreading the new Reformed ideas throughout the Church of England in concert with Cranmer. Who doesn’t love such a delicious irony?

3.  A great choir was named after him. The Merbecke Choir for men and women sings in the Southwark Cathedral in London and is directed by a Huw Morgan. The choir has pictures of itself with Desmond Tutu and Rowan Williams on its website, proving that they are a Big Deal in the Anglican world. And if the choir is a Big Deal, then so should be Merbecke, no?

2.  Merbecke’s heresy trial was held in an area of the Southwark Cathedral (hence the whole choir-named-after-him thing) that is known as the Retrochoir. It is Very Fashionable for a Saint to be Retro.

1.  We all know that God is Mystery. But so is Marbecke! He may have been born in 1510 or perhaps 1505 or 1512; he may have died in 1585, but nobody knows, perhaps because his name is variously spelled Marbeck, Merbecke, and Merbeck. Not only that, but the Wikipedia entry on John Merbecke is described as having unclear sources and insufficient online citations to be reliable. Anyone who can outwit Wikipedia deserves a shot at the big leagues that is the Lent Madness bracket.

Vote! (perhaps early, but not often -- the Supreme Executive Committee is watching)