Hilda of Whitby vs. Ignatius of Antioch

Welcome back, friends, to Lent Madness and the third match-up in the Round of the Saintly Sixteen. We'll continue all week with this round featuring quirks and quotes from our saintly contestants. Today Hilda of Whitby takes on Ignatius of Antioch in a clash of influential figures about 600 years apart. To get to this point, Hilda routed Samuel Seabury and Ignatius came out victorious in the Battle of the Iggys by slipping past Ignatius of Loyola.

We did our best to help keep your weekend bout with Lent Madness Withdrawal (LMW) at bay. Because we care, we...

2. Linked to an article about Lent Madness taking over the entire state of South Dakota (we're still waiting on confirmation that the members of the Supreme Executive Committee will be added to Mount Rushmore).

3. Found out from the conservative website The Daily Caller that Lent Madness is part of a liberal conspiracy and may be responsible for the downfall of the Obama Administration. (Don't read the comments that follow if you have a weak stomach).

Our goal for this week, in addition to the usual Madness, is to get over 5,000 likes on Facebook. There's no reason, with your help, that we can't achieve this milestone. If you're on Facebook but have't yet liked us, you're missing some bonus material and links to get you through the day. (It's kind of like getting the deleted scenes on a movie DVD). We're hovering in the low 4,700's right now. Come on, people!

Hilda (614-680) was the founding Abbess of the Monastery in Whitby, England. The source of our information about Hilda’s life is from the Venerable Bede’s The Ecclesiastical History of the English -- we have no surviving direct quotes from Hilda herself. According to Bede, Hilda was brought up in the court of King Edwin of Northumbria after her father, the king’s brother, was poisoned when Hilda was an infant. She was baptized along with King Edwin and his entire court in 627.

Bede tells us that Hilda's widowed mother, Breguswith, had a dream in which her daughter's destiny was foretold. In this dream she suddenly became aware that her husband was missing and, after a frantic yet fruitless search, she found a valuable necklace under her dress. When she gazed upon the jewel it brilliantly illuminated all of England. This vision was interpreted as foreshadowing the light Hilda was destined to shine on British Christianity.

As a young woman Hilda entered a convent, influenced by St. Aidan, Bishop of Lindisfarne. In 657 she founded the monastery in Whitby, where she remained until her death. Bede describes her as a woman of great energy, wisdom, and a skilled administrator. Many kings and princes sought her council and it is no accident that the Synod of Whitby was held at her monastery in 664. It was here that the church in England decided to follow the Roman rather than the Celtic path, a decision that would impact the course of Christianity in Great Britain.

Legend has it that when snakes infested the town of Whitby, Hilda’s prayer turned the snakes into stones. Here’s a verse by Sir Walter Scott commemorating this event:

When Whitby’s nuns exalting told,
Of thousand snakes, each one
Was changed into a coil of stone,
When Holy Hilda pray’d:
Themselves, without their holy ground,
Their stony folds had often found.

As Bede writes in his hagiography of Hilda:

Thus this servant of Christ, Abbess Hilda, whom all that knew her called Mother, for her singular piety and grace, was not only an example of good life, to those that lived in her monastery, but afforded occasion of amendment and salvation to many who lived at a distance, to whom the fame was brought of her industry and virtue; for it was necessary that the dream which her mother had, during her infancy, should be fulfilled. 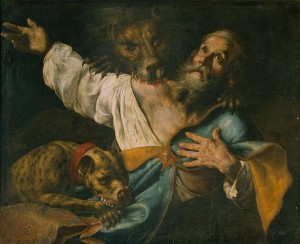 Ignatius was Bishop of Antioch, and was martyred during the 1st-century. His series of letters, written as he was carried under guard to his death at Rome, provide key insight into the Early Church’s understanding of church unity, ecclesiology, and the sacraments.

Even as he was facing the near certainty of his death at Rome, Ignatius appears to have kept his own unique sense of humor as he wrote his letters. While writing to the Church at Ephesus, he opined on a few newly found fashion accessories:

Let nothing appeal to you apart from Jesus Christ, in whom I carry around these chains (my spiritual pearls!), by which I hope, through your prayers, to rise again.

While his letters show no sign that Ignatius ever owned any pets of his own, one of Ignatius’ statements reveals that he might have had great sympathy for any cat owner who just can’t seem to get their pet to act nicely:

I am fighting with wild beasts, on land and sea, by night and day, chained amidst ten leopards (that is, a company of soldiers) who only get worse when they are well treated. Yet because of their mistreatment I am becoming more of a disciple; nevertheless I am not thereby justified.

Among the common threads uniting Ignatius’ letters is his plea for unity within the church. In his letter to the Ephesians, he presents a stunning image of the church as a choir:

In your unanimity and harmonious love Jesus Christ is sung. You must join this chorus, every one of you, so that by being harmonious in unanimity and taking your pitch from God you may sing in unison with one voice through Jesus Christ to the Father, in order that he may both hear you and, on the basis of what you do well, acknowledge that you are members of his Son. It is, therefore, advantageous for you to be in perfect unity, in order that you may always have a share in God.

Legends also abound about Ignatius; one holds that he was among the children taken into Jesus’ arms in Matthew 19. Another says that even as Ignatius was tortured before his death, he never ceased to proclaim Jesus. His tormenters are said to have demanded why Ignatius insisted, to his own detriment, to continue to preach Jesus Christ. Ignatius responded: “Know for certain that I have this name written in my heart, and therefore I cannot proclaim any other name.” After his martyrdom by lions, the legend holds that Ignatius’ body was opened and that Jesus’ name was found inscribed, in letters of gold, on his heart.

Legend or not, it is certain that Christ and the church never were far from Ignatius’ heart, for it was in service of both that Ignatius ultimately gave his life.

HIlda of Whitby vs. Ignatius of Antioch

135 comments on “Hilda of Whitby vs. Ignatius of Antioch”