Martha of Bethany vs. Harriet Tubman

A day after Florence Li Tim-Oi left Gregory the Great chanting to himself in despair, we have a clash of two women, one Biblical and one modern. Martha of Bethany and Harriet Tubman are duking it out for a chance at Hilda of Whitby (and NO this is not a conspiracy to have these worthy women knock one another out of the bracket). To get to this point, Martha stomped on the "Little Flower," Therese of Lisieux while Harriet made quick work of Nicholas Ferrar.

This is the penultimate match-up of the Round of the Saintly Sixteen (we really do love that word) with the last battle taking place between Benedict of Nursia and Dorothy Day on Monday. Then we're on to the Elate Eight, aka the round of Saintly Kitsch. What will your Celebrity Bloggers dredge up? What distasteful and tacky saint-ware will see the light of day? Will the easily offended shun Lent Madness entirely? These are the questions that await us starting on Tuesday.

In the meantime we all face another weekend without Lent Madness and the inherent hollowness of despair. 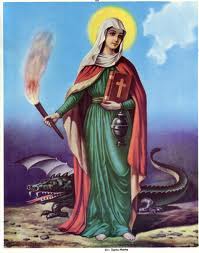 Martha, sister of Mary and Lazarus, testified to Jesus, saying “I believe that you are the Messiah, the Son of God, the one coming into the world.” Despite all you may have heard about Martha, nowhere in the Bible does it actually say she does any cooking or cleaning. “Tasks,” yes. “Work,” sure. And though one might infer that these are domestic chores, that is an inference only, not to be found in Scripture.

This didn’t stop Irma Rombauer from putting Martha on the cover of the 1931 edition of The Joy of Cooking, “slaying the dragon of kitchen drudgery.”

The dragon part of the image actually has stronger literary connections to Martha than cooking does. According to the Golden Legend, after the Resurrection, Martha, Mary, Lazarus, and several others were persecuted and set adrift in the Mediterranean in a boat with no oars or sails which somehow ended up in Marseilles. Martha made her way to a region between Arles and Avignon that was besieged by “a great dragon, half beast and half fish, greater than an ox, longer than an horse, having teeth sharp as a sword, and horned on either side, head like a lion, tail like a serpent, and defended him with two wings on either side.” She stunned him with holy water (query: where did she get it?) and two sticks made into a cross. She dragged the bad boy back to town (either using her own hair or her belt) where he was killed. The dragon’s name was Tarasque, and the town Tarascon-Sur-Rhone was named for him. There’s an annual Fetes de la Tarasque the last week in June when the dragon is lured from his lair “accompanied by chevaliers” (query: what did they do to deserve to be there?).

Despite this feat of derring-do, Martha has a hard time shaking her domestic image. In Margaret Atwood’s novel The Handmaid’s Tale, “older infertile women whose compliant nature and domestic skills recommend them to a life of domestic servitude” are known simply as Marthas. Martha Stewart didn’t do her any favors either.

St. Augustine, however, notes that Martha’s work is important for Christians to emulate and that Jesus “did not say that Martha was acting a bad part.” Instead, this “necessary business” would someday be unnecessary, and “that part which is occupied in the ministering to a need shall be ‘taken away’ when the need itself has passed away.”

The Golden Legend conveys this understanding as Christ appears to Martha on her deathbed, saying, “Come, my well-beloved hostess, for where I am thou shalt be with me. Thou hast received me in thine harbour and I shall receive thee in mine heaven.” 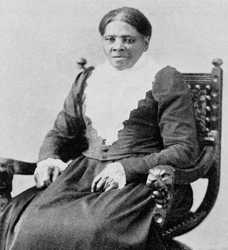 Harriet Tubman devoted her life to fighting for freedom -- whether leading slaves to Canada on the Underground Railroad, becoming a nurse, spy, and soldier in the Union Army, or fighting for the rights of women.

She described escaping into freedom in this way: "I looked at my hands to see if I was the same person. There was such a glory over everything; the sun came up like gold through the trees, and over the fields, and I felt like I was in heaven."

Harriet was rock-solid in her faith -- a necessity in the life she led. She would pray, "Oh Lord! You've been with me in six troubles. Don't desert me in the seventh."

Once, while in charge of several escaping slaves, Harriet led them to the next house in the journey, only to discover upon knocking that the previous owner had gone, and a stranger now lived there. Afraid that the new owner had sounded the alarm, she led the band of escapees to a nearby swamp, where they waited, and Harriet prayed, for over a day. At nightfall, Harriet saw a Quaker man pacing by their hiding place, muttering to himself, "My wagon stands ready in the next barn across the way, the horse is in the stable and the harness is on the nail." Harriet snuck out of their hiding place to discover everything just as the Quaker had said -- a fully stocked wagon with food, and a ready horse. They made it to the next stop, and freedom, in safety.

Harriet also had a gift for faith-based fundraising for her conductor work on the Railroad. One morning, she approached a well-known abolitionist in New York, and informed him that God had told her that he "had twenty dollars to give her to free the slaves." The gentleman was not convinced. Undeterred, Harriet staged a one-woman sit-in in his office. She sat down, and calmly, politely continued to sit throughout the day, as the man continued to do his business.  People came and went, wondering who this determined black lady sitting in the corner could be, but by the time it was over, the gentleman had given sixty dollars to Harriet.

Of her work on the Railroad, Harriet said later, "I was a Conductor on the Underground Railroad for eight years, and I can say what most other conductors can't say; I never ran my train off the track and I never lost a passenger."

She explained her motivation thusly: "I had crossed that line of which I had been so long dreaming. I was free, but there was no one to welcome me to the land of freedom. I was a stranger in a strange land.

Martha of Bethany vs. Harriet Tubman

84 comments on “Martha of Bethany vs. Harriet Tubman”