The Saintly Sixteen continues with this year's early Cinderella, Lucy, taking on another modern martyr, Oscar Romero. Lucy made it this far by upsetting John the Baptist while Oscar Romero trounced Elizabeth Ann Seton. Will the "eyes" have it or will the assassinated archbishop carry the day?

In an emotional match-up (get used to it) yesterday, Jonathan Daniels bested Janani Luwum. He'll go on to face the winner of Martin Luther King, Jr. vs. Frances Perkins in the Elate Eight.

Despite the effects of Lent Madness Withdrawal (LMW) we all might need some time to catch our collective breath this weekend before a full week of Saintly Sixteen match-ups. 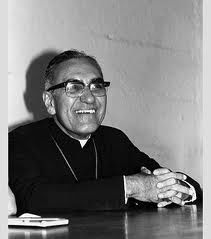 Oscar Romero, Roman Catholic archbishop in El Salvador, used his position to advocate for the rights of the oppressed, and for his advocacy, was assassinated while saying mass in 1980.

Archbishop Romero was orthodox to the core; he even went to Opus Dei for spiritual direction. To his mind, giving voice to the voiceless was advocating for the Church in its truest sense:

You and I and all of us are worth very much because we are creatures of God...and so the church values human beings and contends for their rights, for their freedom, for their dignity.  That is an authentic church endeavor. While human rights are violated,...while there are tortures, the church considers itself persecuted, it feels troubled, because the church...cannot tolerate that an image of God be trampled by persons that become brutalized by trampling on others. The church wants to make that image beautiful.

Sadly, his fellow bishops and the Vatican hierarchy did not agree. When he had an audience with Pope John Paul II, Archbishop Romero used the opportunity to present the pope with a list of the names of the desparacidos that he had gathered, and urged the pope’s immediate intervention. But due to his continued, and fruitless, lobbying of the Vatican, by March 24, 1980, the pope had signed the order to replace him as archbishop. He never got the chance -- Romero was assassinated that evening[1].

Romero’s preaching, because it was broadcast throughout the country, was a powerful persuasive tool in the bloody civil war, and Romero took full advantage of it. In his last Sunday sermon, he directly addressed the members of the death squads:

Brothers, you came from our own people. You are killing your own brother peasants when any human order to kill must be subordinate to the law of God which says, 'Thou shalt not kill'. No soldier is obliged to obey an order contrary to the law of God. ...it is high time you recovered your consciences and obeyed your consciences rather than a sinful order. The church, the defender of the rights of God, of the law of God, of human dignity, of the person, cannot remain silent before such an abomination. ... In the name of God, in the name of this suffering people whose cries rise to heaven more loudly each day, I implore you -- I beg you -- I order you -- in the name of God: stop the repression.

Until the end, Romero thought martyrdom was a fate too honorable for him; “If God accepts the sacrifice of my life, may my death be for the freedom of my people. A bishop will die, but the Church of God, which is the people, will never perish. I do not believe in death without resurrection. If they kill me, I will rise again in the people of El Salvador." 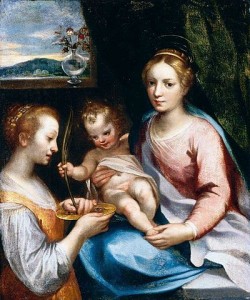 It's great that this round features quirks and legends, since much of what we know about Lucy is legendary. Aside from the important fact that she suffered martyrdom (during the Diocletian persecution of Christians in the 4th-century) after distributing her dowry to the poor, little is known of her life. She has always been a very popular saint, appealing to Lutherans, Roman Catholics, Orthodox Christians, and Anglicans alike. Major feasts for Lucy abound, from Sweden to Italy to Omaha, Nebraska, plus she has an island in the Lesser Antilles named after her.

Legend has it that Lucy’s eyes were torn out, either by her own self or by her torturers, but God supplied her with new eyes. Thus, she is often portrayed holding a platter with a pair of eyes on it, and she is the patron saint of the blind and those with eye diseases.

Another legend explains why in Scandinavia Lucy carries a tray of coffee and saffron buns shaped like cats with raisin eyes (lussekatter): during a 19th-century famine,  a glowing Lucy arrived in a Swedish village by boat, bringing food to the starving residents. She wears the crown of lighted candles so that her hands are free to distribute nourishment to the hungry as she represents the Light of Christ in the world.

A similar 16th-century legend comes from her hometown of Syracuse, Sicily, where she appeared in the harbor, wearing her halo of candles, directing a flotilla of ships delivering wheat to famished Sicilians on her feast day (December 13). The people were so hungry that they simply boiled the wheat, rather than taking time to grind it into flour, hence the eating of wheat berries (cuccia) on St. Lucy’s day in Sicily.

Not many saints have their own soundtrack. Lucy inspired the traditional Neapolitan song “Santa Lucia” which Elvis Presley liked so much that he recorded it on his album “Elvis for Everyone” AND sang it in his movie “Viva Las Vegas.” It was also sung by Barney on “The Andy Griffith Show,” by the Robot and Will Robinson on “Lost in Space,” as well as featured in a Tom & Jerry cartoon, an episode of “Hogan’s Heroes,” and The Marx Brothers movie “A Night at the Opera.”

In all seriousness, though, Lucy’s steadfastness in her faith despite the violence done to her and her selfless generosity to the poor and hungry have inspired people in all times and places (see her photo here with Baby Jesus). With this plethora of stories (and more but I’m going over the word count!), it is clear that there are many reasons why Lucy is so universally beloved. I invite our dear readers to add theirs in the comments below.