Will John of the Cross get “rid” of Ridley? Or will Nicholas Ridley “crucify” John of the Cross? These are the questions that emerge when an English martyr faces a Spanish mystic. Enjoy the last saintly square-off of the week and stay tuned for more Madness on Monday as Phillips Brooks takes on Simeon.

Yesterday it was Thomas Merton in a romp over Aelred 60% to 40%. The day wasn’t without controversy as the Supreme Executive Committee was forced to deny allegations of a “Payment for Placement” scheme involving Saint Louis of France (or Missouri). 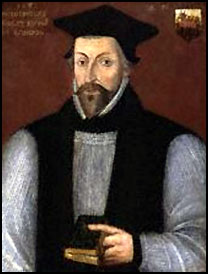 Nicholas Ridley was a leading voice in the Protestant movement in the English Church and was executed for heresy and treason in the reign of Queen Mary I. In 1547, during the reign of Edward VI, Ridley was named Bishop of Rochester. He worked with Thomas Cranmer to develop the 1549 Book of Common Prayer and was enthroned as Bishop of London in 1550. He was a tireless advocate for reformed doctrine and took part not only in its promotion but also in the prosecution of Catholic-minded bishops and clergy. Ridley gained royal notice and favor having preached with energy and zeal before King Henry VIII. Once Henry abandoned Rome, Ridley’s star rose even higher. He showed concern for the interior spirituality and moral fabric of individual churchmen and the wider Church as a whole. He was unburdened by theological depth and known more for the fiery energy with which he preached and taught. Writing on Roman Catholicism, he declared in his Piteous Lamentation on the State of England, “What word of God hath that devilish drab, for the maintenance of her manifold abominations, and to set to sale such merchandise wherewith, (alas, the madness of man!) the wicked harlot hath bewitched almost the whole world?”

As bishop, Ridley ordered altars to be removed from the churches of his diocese and replaced by spare tables for services of the Lord’s Supper. Ridley supported the dissolution of the monasteries and was fierce in his assault on religious imagery in churches, on the doctrines of purgatory, confession, and saints, and on other articles of Catholic faith.

He took part in a plot to remove Queen Mary from the throne in favor of Lady Jane Grey and preached that Queens Elizabeth and Mary were illegitimate and thus not true monarchs. It was for this treason that, after his excommunication for heresy, he was burnt at the stake on October 16, 1555. He was executed alongside fellow bishop, Hugh Latimer. (Cranmer’s execution for heresy followed five months later). Latimer famously said to Ridley before the execution, “Be of good comfort, Master Ridley, and play the man; we shall this day light such a candle by God’s grace in England as (I trust) shall never be put out.”

Collect for Nicholas Ridley (and Latimer and Cranmer)
Keep us, O Lord, constant in faith and zealous in witness, that, like your servant Nicholas Ridley, we may live in your fear, die in your favor, and rest in your peace; for the sake of Jesus Christ your Son our Lord, who lives and reigns with you and the Holy Spirit, one God, now and for ever. Amen. 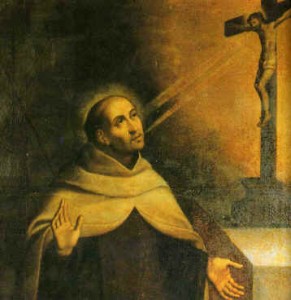 Born in 1542, John of the Cross (Juan de Ypres y Alvarez) was a Spanish mystic, friar, poet, and priest. His father came from a wealthy family that disowned him because he married a woman beneath their social stature. When John’s father died soon after John’s birth, his family was left struggling in poverty. John would later say that the sacrifices of his youth taught him to have joy and peace in the midst of dire circumstances.

As a young adult, John studied at a nearby Jesuit college and later became a Carmelite friar and priest in 1577. Soon after, Teresa of Avila, a Carmelite nun, asked John to help her institute a series of reforms that would help return the Carmelite order to its original purpose of prayer and poverty. John agreed to take up her call and dedicated himself to greater prayer and self-sacrifice, including walking without shoes (as did other nuns and friars who sought a return to a deeper life of prayer). Those who participated in the reforms became known as “Discalced Carmelites” (or “Carmelites of Strict Observance”).

However, not everyone supported the reforms, and some of John’s fellow Carmelite friars kidnapped and imprisoned him in a 6×10-foot prison cell. Several times a week, John’s captors beat him. Even still, it was in the midst of his captivity that John wrote some of his most respected mystical writings, including poetry and spiritual commentary. Many of these writings reflected his dependence and journey to union with God. In The Dark Night of the Soul, one of John’s most well-known writings, John described the journey of feeling spiritually abandoned by God and how such a struggle can be a grace through which Christians can grow in faith and union with God.

After nine months in prison, John finally escaped and fled to a nearby convent. Over the course of his life, he traveled more than 30,000 miles and established more than eight monasteries across the Spanish countryside. John died in 1591 and was canonized a saint by Benedict XIII in 1726.

Collect for John of the Cross
Judge eternal, throned in splendor, you gave Juan de la Cruz strength of purpose and mystical faith that sustained him even through the dark night of the soul: Shed your light on all who love you, in unity with Jesus Christ our Savior; who with you and the Holy Spirit lives and reigns, one God, for ever and ever. Amen.

131 Comments to "Nicholas Ridley vs. John of the Cross"