Today we experience something of a time warp, traveling from the 19th century back to the days of the early church. We encounter John Keble -- priest, poet, academic, and major player in the revival of the Church of England and Thecla -- companion of the apostle Paul and passionate pursuer of holiness.

In yesterday's saintly action, Juan Diego advanced to the Saintly Sixteen with a 57% to 43% victory over Hadewijch. He'll face the winner of Dorcas vs. Frederick Douglass.

As an aside, we've been delighted to see the number of comments that come in throughout the 24 hours each matchup is open. They are a wonderful blend of thoughtful and gracious and educational and inspirational -- basically the opposite of nearly every other online forum!

And in case you missed yesterday's episode of Monday Madness, it included a verifiable miracle involving a corporeal Golden Halo. Not that Tim and Scott are angling to make it into the 2089 bracket or anything... 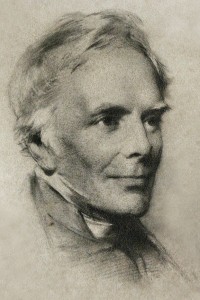 Though devoted to his calling as a country priest, serving for thirty years as the vicar of Hursley, John Keble is best known as an influential founder of the Oxford Movement. This movement sought to renew the Church of England through a better understanding and adherence to the practices of the early church. In 1833 he preached the Assize Sermon, soon published with the provocative title “National Apostasy.” Keble was a key player in the Oxford Movement and wrote nine of the ninety Tracts for the Times. In addition to writing poetry, tracts, and sermons, Keble also translated the works of Iranaeus and prepared a three-volume edition of the works of Richard Hooker.

During his life, he was perhaps best known as a poet. First published anonymously, his collection The Christian Year went through ninety-five print editions by the time of his death in 1866. Embarrassed by its success, Keble dedicated the profits to restoring the church building at Hursley. Some of these poems are still familiar as hymns today. He was elected professor of poetry at Oxford in 1831 and held the (non-residential) post for ten years.

In 1845, Keble began exploring the possibility of creating a college at Oxford that would be of moderate cost and hold fast to the best practices of the Church of England. Established in his memory, Keble College quickly shifted focus from theological formation toward more traditional pedagogy but remained committed to making an Oxford education more widely available to all economic classes.

Keble would no doubt be shocked at how distant today’s Church of England is from the established church he sought to renew, but there are still parts of his Assize Sermon that ring true today.

“The surest way to uphold or restore our endangered Church will be for each of her anxious children, in his own place and station, to resign himself more thoroughly to his God and Savior in those duties, public and private, which are not immediately affected by the emergencies of the moment: the daily and hourly duties, I mean, of piety, purity, charity, justice.”

Grant, O God, that in all time of our testing we may know your Presence and obey your will; that, following the example of your servant John Keble, we may accomplish with integrity and courage what you give us to do, and endure what you give us to bear; through Jesus Christ our Lord, who lives and reigns with you and the Holy Spirit, one God, for ever and ever. Amen. 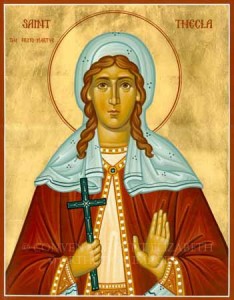 Thecla was a follower of the Apostle Paul, whose life was recorded in the Acts of Paul and Thecla, a prominent piece of early Christian literature.

This book recounted a missionary journey of Paul to Iconium, where he was proclaiming “the word of God about abstinence and the resurrection.” Thecla, upon hearing Paul’s message, found herself enraptured. Her devotion to Paul and his teaching so deeply concerned her mother and fiancé (worried that she would follow Paul’s demands to live in chastity), they formed a mob and imprisoned Paul.

Thecla broke into the prison, and when discovered with Paul, they were both brought before the authorities. Paul, enjoying the privilege of both his Roman citizenship and his being born male, was whipped and expelled from the town, while Thecla was sentenced to burn at the stake — an example for those who might consider Paul’s preaching. When Thecla was to be executed, “God took compassion on her, and caused a great eruption from the earth beneath, and a cloud from above to pour down great quantities of rain and hail; Insomuch that by the rupture of the earth, very many were in great danger, and some were killed, the fire was extinguished, and Thecla was preserved.”

Thecla followed after Paul, desperate to be baptized. She traveled to Antioch, where a nobleman fell in love with Thecla and offered Paul money for her. When Paul denied knowing her, the nobleman tried to take her by force. Thecla resisted, and “tore his coat, and took his crown off his head, and made him appear ridiculous before all the people.” Again she was brought before authorities and sentenced to die by being eaten by wild beasts. Facing what she believed to be a near-certain death, Thecla saw a pit of water filled with ravenous seals. Believing this was her only opportunity to be baptized, she threw herself into the water, saying, “In thy name, O my Lord Jesus Christ, I am this last day baptized.” And in another miracle, the seals died before they could devour her.

In the Eastern Church, Thecla is regarded as an “apostle and protomartyr among women.” Observance of her holiness flourished around Seleucia, where a church was built over her alleged tomb. Thecla remains among the most celebrated female saints of the earliest ages of Christianity, demonstrating that regardless of the truth or fiction of her life and story, women have played an indispensable role in the mission and growth of the early Church. In recognizing the holiness of Thecla, the Church honors the witness of all women who have lived and died in sharing the good news of Jesus and his love.

Almighty and everlasting God, who kindled the flame of your love in the heart of your servant Thecla: Grant to us, your humble servants, a like faith and power of love, that we who rejoice in her triumph may profit by her example; through Jesus Christ our Lord, who lives and reigns with you and the Holy Spirit, one God, for ever and ever. Amen.