We're back! The Saintly Sixteen continues with a 7th century monk, bishop, and hermit vs. an 18th century Native American, consensus builder, and British loyalist. The round of Quirks and Quotes continues with Cuthbert vs. Molly Brant.

In Friday's Lent Madness action, Kamehameha of Hawaii defeated David Oakerhater 61% to 39% to advance to the Elate Eight.

And, finally, some of you may have heard about this other bracket-style tournament that takes place this time of year. We have done a saintly analysis of March Madness to assist you in your water cooler conversations. 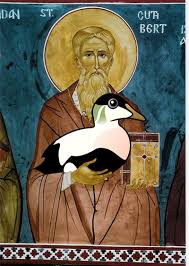 Perhaps the most beautiful thing that is said of Saint Cuthbert is, “Cuthbert sought to follow Christ.” In this he is like many of the saints but his pattern of life was uniquely Christ-like in ways that shine forth through the centuries. No fewer than 22 lives of Cuthbert were written in the Middle Ages and his Christ-focused living is an example to all Christians.

In a Kingdom awash in both great violence and wealth, Cuthbert’s counter-cultural simplicity and kindness were a source of powerful spiritual inspiration. Stories were long told of the miracles of his life but also of enduring import were stories of his very human kindness. Upon his death, his legend grew and a significant cult emerged around his memory and relics.

There are a number of legends about the incorruptibility of Cuthbert’s mortal remains that signified his saintliness. Even in the throes of the zeal of the Reformation his body was found to be relatively undecayed and rather than being subjected to ransacking as so many other saints were, his pectoral cross, portable Altar, stole, and the precious fabrics in which his body was wrapped were not hauled off to the pawn shop by Henry VIII’s commissars but were reburied in what remained of his original coffin.

Bishops of the time were renowned for displays of wealth. They levied taxes on villages they had never visited nor even heard of, wielded immense power, and took hearty part in the struggles for it. Cuthbert was once given a gift of silk which he declined to wear when he was vigorous and only asked for it to be brought to him to wear on his deathbed when he wanted to be dressed to receive his Lord.

This may seem a small detail – yet Cuthbert’s dignity and generosity shielded his mortal remains when little else sufficed to protect other holy sites and remains.

The Kingdom of Northumbria, a center for trade and travel, was an immensely wealthy one and there are many stories of churches, courts, and kings bedecked in jewels and arrayed in magnificence. Cuthbert tried to be both in the world and made substantial contributions to the temporal kingdom – but he was far more concerned with being a good citizen of the Kingdom he feared was threatened by ostentation.

Cuthbert’s dilemma was not between the power and wealth of the world or the simplicity of the monastery. Cuthbert’s deep personal struggle was between being a pastor and being a hermit. He desperately wanted to love and serve those who struggled daily but he feared becoming an unwholesome example by falling prey to vanity. His long pursuit was to unite his episcopal and monastic call with integrity. He said, “Even if I could hide myself in a tiny dwelling on a rock, even then I should fear lest the love of wealth should tempt me.”

Bede’s energy, in writing about Cuthbert, was for telling the miraculous stories of Cuthbert. Yet it is his simplicity of life and centered virtue that perhaps are most powerfully resonant today. 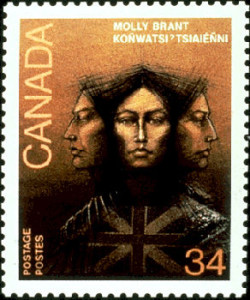 Even as a young child, Molly Brant exhibited a gift for leadership. In 1754, at the age of 18, Molly traveled with her stepfather and other Mohawk leaders to Philadelphia to contest the fraudulent sale of Native territory. It was there, historians believe, that Molly got her first taste in the art of negotiation and compromise.

Molly continued to put these skills to use when she became a wife, mother (to 8 children!), and tribal leader. She frequently led the Bureau of Indian Affairs on behalf of her common-law husband Sir William Johnson when he was away. Although Molly received an education from Christian missionaries and was a devout Anglican, she retained a respectful devotion to many Mohawk customs, which allowed her to serve as a consensus-builder between two nations. During the Revolutionary War, she also commanded soldiers and organized relief efforts. As one British military official wrote: “One word from her goes further with them [our soldiers] than a thousand words from any white man without exception.” Even after the defeat of the British in the Revolutionary War, Molly continued to serve as an advocate for the Iroquois nation as new boundary lines were drawn between Canada and the newly formed United States of America.

Not only was Molly Brant skilled in negotiations and peacemaking, she was a skillful trader and herbalist who often used the herbs in her garden for medicinal purposes, further ensuring her strong ties to her Mohawk community. She continued this practice upon settling in southern Ontario where, in 1791, she financed the building of the first Protestant church in Kingston.

For many years, American historians ignored Molly Brant’s place in history because of her Loyalist leanings. Yet, such an omission fails to account for her remarkable gifts and achievements in the face of massive cultural, social, and economic transformations As one biographer has noted, "Posterity has done scant justice to this remarkable woman. In her lifetime she commanded respect from Indian and white alike. Soldiers, statesmen, governors, and generals wrote her praise. Her life from the Ohio and Mohawk Valleys to Kingston was not easy…She survived this turmoil with dignity, honour, and distinction as a mother and a leader.”

In an attempt to bring attention to Molly Brant’s contributions, composer Augusta Ceccconi-Bates created an opera in honor of Molly in 2003. Two years later, the non-profit Molly Brant Foundation was chartered to provide support for research related to the lives of native people in southern Ontario.

Molly Brant never wavered in her faithfulness to prayer, the study of Scripture, and the transmission of the Christian faith to her eight children. Whether one counts her a Loyalist or a Patriot, Molly’s tenacity, generosity, and cooperative spirit are a legacy to us all.

At 7:20 p.m. today, we blocked three internet addresses due to excessive voting. So a few folks in St. Paul, MN; New Castle, PA; and Saudia Arabia (go figure) are not going to have access to Lent Madness. Please vote once only! If you are a school or some other institution which will be registering lots of votes, let us know ahead of time. Again: one vote, one person. If you want your saint to win, get more people to vote!

172 comments on “Cuthbert vs. Molly Brant”