Francis of Assisi vs. Cecilia

Today Francis of Assisi takes on Cecilia and Lent Madness voters everywhere are forced to choose between animals and music. Okay, that's just the superficial choice. It's really a choice between your childhood rabbit and your mother who sang in the church choir. The winner will face Thecla in the Elate Eight, thereby finalizing the first matchup of the next round.

Yesterday Frederick Douglass solidly defeated Juan Diego 60% to 40% to advance. Click here to see the fully updated bracket (scroll down for links to all the previous matchups including Francis' first round victory over John Wycliffe and Cecilia's defeat of Balthazar).

We also gave you an opportunity to vote (it's what we're all good at!) for 2013 Golden Halo winner Frances Perkins to appear on the $20 bill. And, no, the SEC hasn't started printing its own purple money -- this is an initiative of the U.S. Treasury Department. 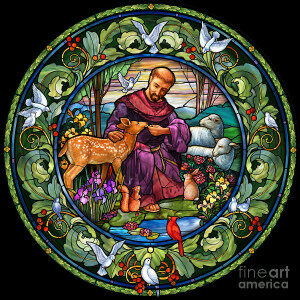 The Francis of ideas is often quite different from his actual life, ministry, and words. We envision him as a quiet man surrounded by animals who founded a gentle monastic order. In reality, Francis lived his life with a holy blend of rashness, mysticism, and devotion many modern Christians would call extreme.

G.K. Chesterton notes the Bishop of Assisi, when visiting the Order and seeing them without comforts, without possessions, eating anything they could get, and sleeping on the ground, was greatly disturbed. Francis met the Bishop’s concerns with a stunning in-your-face-ness (bishops were often called upon to support military engagements) by saying, 'If we had any possessions, we should need weapons and laws to defend them.”

Francis wasn’t even his baptismal name; Giovanni was. Francis, the 12th century version of “Frenchy,” was given to him allegedly because Francis was passionate about French Troubadour poetry. While Francis did write in poetic style, he didn’t write the poetic "Prayer of St. Francis." He did, however, write this prayer of faithful hope:

Almighty, eternal, and merciful God,
grant us in our misery the grace
to do for You alone
what we know You want us to do,
and always
to desire what pleases You.

Francis is often quoted as saying, “Preach the Gospel at all times; if necessary, use words.” And while Francis did preach the Gospel in word and deed, no record attributes this quote to him. In fact, Francis was a prolific preacher to all creation. He is recorded in Little Flowers of St. Francis as preaching to the birds…using words. The anonymous writer tells: “Francis began to preach. He ordered the swallows, who were calling, to keep silence until he had finished; and the swallows obeyed his voice.”

Francis asked his companions to wait while he went to “preach to my little sisters the birds’; and entering into the field, he began to preach to the birds which were on the ground, and suddenly all those also on the trees came round him, and all listened while St Francis preached to them, and did not fly away until he had given them his blessing.”

In 1224, Francis was engaged in deep prayer when he received the Stigmata. Between the Stigmata and the physical toll from a life of denial, Francis retired to San Damiano, where he composed one of his most famous prayers, The Canticle of Brother Sun, considered the first poem written in the Italian language. Its words celebrate creation -- all creation. We read in it, “No mortal lips are worthy to pronounce Your name. Be praised, my Lord, through all Your creatures.”

Chesterton writes of Francis: “His life was one riot of rash vows; of rash vows that turned out right.”

We give thanks for a man whose real life of rashness, mysticism, and devotion still gives us an example of a life lived in Christ’s love. 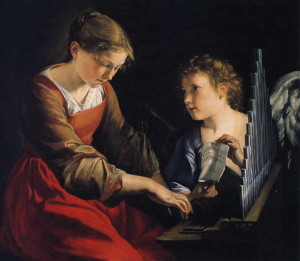 Cecilia is the patron saint of singers, musicians, organists, and poets. While witnessing the deaths of her husband and brother-in-law, it is believed that she was singing praises to the Lord during her own martyrdom in Rome in 280 AD.

The songs that Cecilia sang while she was being martyred have been lost to the ages. However, the many poems and songs written and performed in her honor remain great contributions to the literary and music world, and are firmly planted in society’s juke box over the centuries.

Equally famous is Georg Friedrich Händel’s “An Ode For St. Cecilia’s Day,” from 1739. With words by Newburgh Hamilton:

But bright Cecilia raised the wonder high'r:  When to her organ, vocal breath was giv'n,  An angel heard, and straight appear'd, Mistaking earth for Heav'n.

In 1941, at the beginning of World War II, the Andrews Sisters sang, in full harmony, “The Shrine of St. Cecilia”:

Our home is a shambles, all I treasured has gone
The town seems deserted, everyone's so forlorn
A storm came from up above but somehow it missed
The shrine of Saint Cecilia

I kneel in my solitude and silently pray
That heaven will protect you, dear, and there'll come a day
The storm will be over and that we'll meet again
At the shrine of Saint Cecilia

Benjamin Britten’s famous “Hymn to St Cecilia” was sparked by many reasons, among them that he was born on St Cecilia's day. Written in 1942 Britten’s piece is based on the renowned poet W. H. Auden’s Hymn to St. Cecilia:

Blessed Cecilia, appear in visions
To all musicians, appear and inspire:
Translated Daughter, come down and startle
Composing mortals with immortal fire.

It is reported that Paul Simon claims his famous “Cecilia” refers to our saint, in her role as muse:

Simon refers to Cecilia in another of his songs, “The Coast”:

A family of musicians took shelter for the night in the little harbor church of St. Cecilia.

In 1966, Michael Hurd composed "A Hymn to Saint Cecilia" based on John Dryden's 1687 visually stirring poem, A Song for St. Cecilia's Day:

Orpheus could lead the savage race;
And trees unrooted left their place,
Sequacious of the lyre;
But bright Cecilia rais'd the wonder higher:
When to her organ vocal breath was given,
An angel heard, and straight appear'd
Mistaking Earth for Heaven.

There are numerous others through the ages who have written and composed pieces to St. Cecilia. Based on poems and music, whether old and modern, there’s no way around it – Cecilia is one popular gal!

Francis of Assisi vs. Cecilia

135 comments on “Francis of Assisi vs. Cecilia”