Who's ready for another full week of hard-hitting saintly action? Well, clearly YOU are since a) you're reading this and b) you've  been hitting "refresh" on your web browser continually since 7:50 am EST just in case the SEC erred and posted this matchup a few minutes early.

After an entire weekend experiencing LMW (Lent Madness Withdrawal) symptoms, your balm has been delivered in the form of Francis of Assisi vs. John Wycliffe. Time to pull out the ubiquitous Wycliffe bird bath that likely graces your garden and start reading about these two medieval saints.

Speaking of birds and other creatures great and small, we hope you read the SEC's statement released over the weekend assuring the Lent Madness public that no animals were harmed in the formation of the 2015 bracket.

But enough stalling. The Madness is back. Get to it! 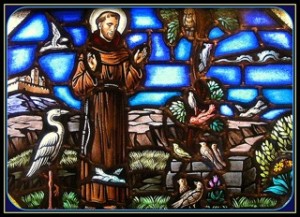 Francis was born into a wealthy family in the early twelfth century. His younger years were spent like many rich young men of the day — partying rather than praying. A series of events, including an imprisonment and a serious illness, began to shift Francis’s priorities and awareness. On a pilgrimage to Rome, Francis was moved to compassion by encounters with beggars outside St. Peter’s Cathedral.

When Francis returned home, he broke from his old life, taking up the disciplines of poverty and devotion. While attending Mass one day, Francis heard the words of Jesus from Matthew’s Gospel, asking his disciples to leave all and follow him. These words guided Francis’s life henceforth. He became an itinerant preacher embracing poverty, humility, and devotion to the Holy Eucharist. He soon had people joining him in his example of ministry. When the number of followers reached twelve, Francis wrote a rule for the group and soon obtained papal approval for the “friars minor” as they called themselves.They continued to grow and encouraged a similar society for women (founded by Clare of Assisi) as well as a Third Order for lay associates.

Francis was not a priest and evidence that he might have been a deacon comes mainly from the account by Bonaventure, who wrote of Francis’s use of a cave in the Italian village of Grecio to preach about the Nativity. Francis used a manger and two live animals (an ox and an ass) to teach about the Babe of Bethlehem. Thus, we have the first recorded account of a crèche. The hay Francis used in the crèche was reported to have cured local cattle of disease.

There are many legends surrounding Francis’s interactions with animals. From preaching to birds to freeing fish and rabbits caught for meals, Francis was often reported to call these creatures “Brother” and “Sister.” The source of the stories is unclear, but Francis expressed his love of creation and an understanding that we are in relationship not just with each other as humans but with all of creation in his “Canticle of Brother Sun.” While Francis composed several other prayers, he most likely was not the author of the prayer most commonly attributed to him — "Lord, make me an instrument of your peace” — since its composition date is 1912, several centuries after Saint Francis died.

In prayerful preparation for Michaelmas 1224, Francis received the stigmata, the five wounds of Christ. He received care for these wounds in several cities, but in 1226 he requested to be taken back to Portiuncula, the site of the church where he first heard the words from Matthew bidding him to give up all he had and live the gospel. He died where his call was birthed on October 3, 1226, and he was canonized less than two years later.

He devoted himself to a life of preaching the gospel by caring for the poor as one of them, by honoring God in all creation, by his profound devotion to prayer and humility, and by his forming community to join him in God’s ministry.

Collect for Francis of Assisi

Most high, omnipotent good Lord, grant your people grace to renounce gladly the vanities of this world: that following the way of blessed Francis, we may for love of you delight in your whole creation with perfectness of joy; through Jesus Christ our Lord, who lives and reigns with you and the Holy Spirit, one God, for ever and ever. Amen. 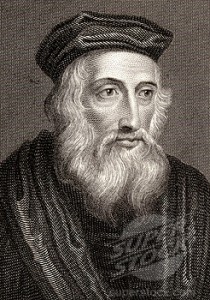 John Wycliffe was an early supporter of reform in the Roman Catholic Church. Born in Yorkshire, England, Wycliffe received an excellent education at Oxford University. He earned his doctorate in 1372 and came to be considered one of Oxford’s leading philosophers and theologians. Remembered by the Church as both a translator and controversialist, Wycliffe conformed to the mold of faithful people who did amazing things but would probably never be anyone’s first choice to share a beer with (see also John the Baptist, Cardinal Walsingham, and the Apostle Paul).

Not everyone was a fan of Wycliffe’s criticism of the doctrine of transubstantiation, his challenge of indulgences, and his repudiation of private confession. His deep belief that every Christian should have access to scripture in their own language made him a forerunner of the Protestant Reformation and Public Enemy #1 for the Roman Catholic Church.

He was summoned to appear before the Bishop of London in 1377 to answer to the charges of heresy, but before the trial could start, recriminations on both sides filled the air and erupted into an open fight, ending the trial. Three months later, Pope Gregory XI issued five church edicts against Wycliffe, in which Wycliffe was accused on eighteen counts and was called “the master of errors.”

The Church tried to silence him but it was too late. Wycliffe had by this time many followers known as Lollards. They preached anticlerical and biblically centered reform. The more the Church attacked and suppressed Wycliffe’s teachings, the more determined his followers became. At one point the Lollards were driven underground, but they remained a constant source of irritation to the English Catholic authorities until the English Reformation made their views the norm.

John Wycliffe died December 28, 1384, from a stroke. In May 1415 he was declared a heretic, and his writings were banned. Wycliffe’s impact on the church was so great that forty-three years after his death, officials dug up his body, burned the remains, and threw the ashes into the River Swift as a protest against his teachings.

O God, your justice continually challenges your Church to live according to its calling: Grant us who now remember the work of John Wycliffe contrition for the wounds which our sins inflict on your Church, and such love for Christ that we may seek to heal the divisions which afflict his Body; through the same Jesus Christ, who lives and reigns with you in the unity of the Holy Spirit, one God, now and for ever. Amen.

236 comments on “Francis of Assisi vs. John Wycliffe”