Kemper vs. Kempe. Sometimes matchups exist solely because the SEC likes the names involved. Sure, there's always prayerful discernment that takes place in the formation of the bracket. But still, how could we not pair these two against one another? Only a single "r" separates Jackson Kemper and Margery Kempe, missionary bishop and 15th century mystic. Who will ride on? Who will be left in a vale of tears? That, dear friends, is up to you.

Yesterday, Brigid of Kildare soundly defeated Elizabeth, the mother of John the Baptist 68% to 32%. Fortunately, no silver platters were involved.

In case you missed it, we offered everyone a brief peek behind the Purple Curtain of Lent Madness, sharing some insights into how the annual bracket is formulated. A rare glimpse into the mind of the SEC. 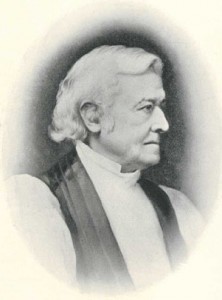 The seemingly inexhaustible Jackson Kemper served as the first missionary bishop in The Episcopal Church,working over the course of a thirty-five-year ministry in such untamed wilderness territories as Indiana, Kansas, Missouri, Iowa, and especially Wisconsin, where he established the Nashotah House seminary and eventually made his home.

Born in 1789, Kemper served as a priest for many years in Philadelphia until the deaths of his wife and his mother led him to new fields of service. In 1834, Kemper traveled to Green Bay, Wisconsin. At the same time, a committee of bishops was considering how to approach the western frontier. In 1835, General Convention appointed Kemper as missionary bishop of Indiana and Missouri (with Wisconsin and Iowa thrown in for good measure) and assigned him the tasks of establishing and organizing parishes, recruiting clergy, and fundraising, all at a time when travel was daunting and communication was spotty.

Kemper was up to the challenge due to his “indefatigable zeal and amiable manners,” adding to his portfolio the establishment of schools to train young men and clergy, since he found that many Eastern-trained priests weren’t able to hack it in the harsh midwestern climate. In his spare time, he expanded his Missionary See to more distant territories such as Minnesota, Nebraska, and even further west, making regular visits to parishes and clergy throughout much of this vast region.

He was also famously generous. His biographer wrote, “so simple were his tastes and so perfect was his economy that out of his annual missionary stipend of fifteen hundred dollars, he was able to give largely to struggling missions in his field; there was probably no one in the church who gave away more in proportion to his income than he.”

After twenty-four years as a missionary bishop, Kemper retired at the age of sixty-nine in 1859, only to take up the role of diocesan bishop of Wisconsin. He continued to make regular visitations within the diocese and further afield for another decade, when failing health forced him to stay near the Nashotah community where he had resided for many years. At the age of eighty, his final episcopal act was a confirmation near his home in April 1870. He continued official duties with the aid of a secretary until days before his death on May 24, 1870.

Lord God, in whose providence Jackson Kemper was chosen first missionary bishop in this land, and by his arduous labor and travel established congregations in scattered settlements of the West: Grant that the Church may always be faithful to its mission, and have the vision, courage, and perseverance to make known to all peoples the Good News of Jesus Christ; who with you and the Holy Spirit lives and reigns, one God, for ever and ever. Amen. 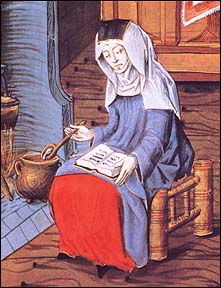 The first autobiography written in English is something of a mystical revelation, travel diary, opinion essay, theological discourse, and personal diary all in one. Margery Kempe, who lived in the late-fourteenth to early-fifteenth century, was a middle-class woman living in Norfolk in eastern England.

She began The Book of Margery Kempe recalling a series of crises during and after her pregnancy. She felt tempted by the devil not to confess her sins. In response, she fasted, performed acts of charity, and devoutly prayed, to no avail. She eventually sent for her confessor and confessed sins from “her whole lifetime.” After her confession (of which she was not complimentary of the pastoral skills of the priest), she was disturbed and tormented for almost a year by visions of devils. In a moment of great crisis, she had a vision of Christ but did not fully embrace her mystical deliverance. Only after several business failures did Kempe surrender to a life of mysticism and Christian devotion.

Kempe experienced the gift of tears — frequent sobbing, weeping, and wailing at the sight of the Blessed Sacrament, while engaged in prayer and meditation, or engaged in other acts of devotion. Throughout her book, Kempe remarked at the discomfort others had at her expression of this holy gift. She shared her thoughts and visions of heaven freely, as well as her conversations and visions with our Lord. Kempe, like many medieval mystics, was attached to meditations on the events of Christ’s life and had many visions associated with these events. She also found sexual relations with her husband disgusting and eventually took vows of chastity, after giving birth to fourteen children.

Kempe then began a series of pilgrimages to the Holy Land, Assisi, Rome, and Santiago de Compostela, as well as several holy sites in England. She wrote of her encounters with several historical figures, including the Archbishop of York — who questioned her as a heretic, found her unorthodox, and told her to leave York and never return. She spoke with Julian of Norwich. She called out the Archbishop of Canterbury for the behavior of his clergy. Perhaps in a related story, she was almost burned as a heretic while in Canterbury.

Kempe, who likely dictated her book to a scribe, wrote with a mystical stream of consciousness. She was not concerned with narrative timelines; she did not write a text primarily concerned with intricate depictions of her mystical experiences. She wrote about the exhausting attitudes of others who criticized her life and expression of faith and of moments where she was vindicated for being true to herself. She shared the raw (sometimes outrageous) aspects of all that was her life.

An admission to the Guild of the Trinity at Lynn in 1438 is the final historical mention of Kempe. Her book, known only in excerpts until a manuscript was found in a private collection in the twentieth century, has become a key reflection on the life and spirituality of a middle-class woman in the Middle Ages.

Gracious God, we give you thanks for the life and work of Margery Kempe, hermit and mystic, who, passing through the cloud of unknowing, beheld your glory. Help us, after her example, to see you more clearly and love you more dearly, in the Name of Jesus Christ our Savior; who with you and the Holy Spirit lives and reigns, one God, for ever and ever. Amen.