The Saintly Sixteen continues with a Hawaiian king vs. the first Native American saint. Kamehameha takes on David Oakerhater as a man passionate about the medical care of his people faces a man whose Cheyenne name is translated "Making Medicine." Regardless of the outcome, one thing is certain: one of Neva Rae Fox's saints will advance to the next round.

In yesterday's first battle of the Saintly Sixteen, Brendan the Navigator finally lost his way, losing to Thecla 62% to 38%. Thecla becomes the first saint of Lent Madness 2015 to advance to the Elate Eight where she'll face the winner of Francis of Assisi vs. Cecilia.

Kamehameha is renowned for his many ministries – from introducing Anglicanism to the Hawaiian Islands to translating the Book of Common Prayer into the local vernacular. Another of his lasting legacies throughout Hawaii was the pioneering steps he instigated for the betterment of the health and welfare of his people.

Kamehameha IV was born Alexander Iolani Liholiho on February 9, 1834 and was crowned King just shy of his 21st birthday.

With his wife and partner in reform, Queen Emma, Kamehameha set forth to transform the Hawaiian Islands by offering his people new, modern ways of life. He was devoted to introducing modern healthcare methods and facilities. Perhaps his drive was based on the healthcare issues that touched him and his family.

From the time of his birth to his ascension to the throne, Kamehameha witnessed much sadness over the health of his people. There was an effort in 1839 to vaccinate the population, which had been prompted by a smallpox outbreak. In 1848, measles, brought to the islands by foreign ships, killed one-third of the residents. Other epidemics in 1848-1849 -- whooping cough, influenza and the ever-threatening smallpox -- killed one in ten of the Hawaiian population. In 1853 another smallpox epidemic killed 5,000 to 6,000 more Hawaiians.

In response to these ongoing tragedies, the King designed a plan to build hospitals for the sick and dying, and homes for the elderly. When the government legislature refused to support his plans, he and Queen Emma raised private funds – enough not only for a hospital but for a much-needed leprosy clinic as well. In 1859 The Queen’s Hospital – named for Emma and still in operation as The Queen’s Medical Center in Honolulu -- opened in temporary quarters.

In laying the cornerstone, Kamehameha said, "There is something wholesome in being called upon from time to time to acknowledge, however strong our own health may be, and however prosperous our fortunes, that after all, the sick are our brothers and sisters."

On the home front, Kamehameha and Emma had a son, Albert who died in 1863. It is told that Kamehameha felt responsible for the death of Prince Albert. The four-year-old prince was seriously ill, burning with fever, possibly with spinal meningitis. Kamehameha gave the boy a cold shower to cool him off. However, Albert’s health deteriorated, and the youngster died in August 1862.

Heartbroken, grief stricken, and with his own health failing him as he suffered with nerve disorders and asthma, Kamehameha died the next year. Some believe he died of grief. He was only 29 years old.

Kamehameha had a short life, but in his time, he made a lasting impact on the lives of his people and on the generations to come in many ways, from Anglicanism and prayers to healthcare and hospitals. 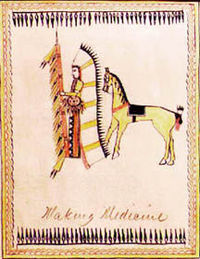 David Pendleton Oakerhater, an Episcopal deacon and the first Native American saint, was an accomplished artist and a leader in an art style known as Ledger art.

A Cheyenne Indian of Oklahoma, Oakerhater was imprisoned by the United States Army in Florida beginning in 1875. During this imprisonment, an education was provided for all the Native American prisoners that included language, Christianity and art.

Furnished with some instructions and art supplies like pencils, ink, paints, crayons, and paper, Oakerhater delved into art as his new form of expression. Using pens, he and the other prisoners drew in ledger books, hence the name of the art form.

Ledger art is defined as a Native American drawing or painting on paper or cloth. Historians report that Ledger art was popular from the Civil War through World War I. The term Ledger art is rooted from the accounting ledger books that were used for paper. Ledger art has been described as an abstract style illustrating the everyday life of Native Americans, such as dances, hunts, tribal events and self-portraits.

The artwork that emerged from the Florida prison differed from the traditional Plains Indian art in that the prisoners began to focus less upon themselves and their actions, and more upon things.

Oakerhater signed some of his works with the English translation of his Cheyenne name, which was "Making Medicine.” Sometimes he signed with a glyph depicting a dancer in a sun dance.

It was through his art that Oakerhater’s patron, Mrs. Alice Key Pendleton first noticed him. This connection eventually assisted in Oakerhater’s release from the Florida prison. After his release, Oakerhater devoted his time to his diaconal duties, his Church responsibilities, and his ministry to his fellow Native Americans.

There are no reports of Oakerhater, or Making Medicine, continuing his art work after his departure from prison. Perhaps it was because he had a new passion. When he returned to his people in 1881 he preached in a sermon, "You remember when I led you out to war I went first, and what I told you was true. Now I have been away to the East and I have learned about another captain, the Lord Jesus Christ, and he is my leader. He goes first, and all He tells me is true. I come back to my people to tell you to go with me now in this new road, a war that makes all for peace."

142 comments on “Kamehameha vs. David Oakerhater”