Let's just state right off the bat that there is no room for nepotism in Lent Madness. Saints related to members of the Supreme Executive Committee are ineligible to compete for the Golden Halo.

Therefore, just because Francis of Assisi won the coveted Golden Halo last year, there was no funny business going on that led to Clare of Assisi's inclusion this year. The SEC was not coerced by the Assisi mafia. In fact, Clare only made it into the bracket by winning a play-in round against  Chad of Lichfield held during the Episcopal Church's General Convention last summer.

Anyway, today Clare faces off against Denis. Please don't lose your head over this battle.

Yesterday, in a VERY tight contest, Columba eked out a victory over Kateri Tekakwitha 51% to 49% in the closest battle to date in Lent Madness 2016. Columba will face Meister Eckhart in the Saintly Sixteen. Sadly, we also saw our first case of voter fraud. At 11:02 pm EST, two addresses, in Vermillion, SD and Medford, OR were blocked. 125 votes for Kateri Tekakwitha were recorded from these two locations, and we do not know of groups participating in Lent Madness in those cities. Not enough votes were cast to affect the outcome, but we have blocked the addresses to prevent further votes. Remember, vote only once per person or be cast into the outer darkness of Lent Madness! Also, Jesus does not approve of cheating.

And finally, if you missed yesterday's edition of Monday Madness, Tim and Scott share suggestions on how to be a Lent Madness evangelist in your congregation. Using a Lent Madness mug in place of a chalice may or may not be one of their tips. 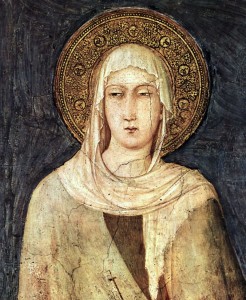 Often overshadowed by her friend Francis, Clare was one of the most dedicated followers of Saint Francis, the Poor Man of Assisi (and 2015 Golden Halo winner). Clare has been called a clear mirror of a life lived in deep spirituality, dedicated wholly to Christ, embracing the charisms of poverty, cloistered contemplation, and devotion.

Like Francis, Clare was born into a wealthy family in the late twelfth century. She led a life of prayer and devotion from early childhood. Sometime before 1212, Clare heard Francis preach. Soon after, her uncle arranged a marriage for her, and Clare fled to Francis, asking his advice. He implored her to live a life dedicated to Christ. On Palm Sunday in 1212, Clare began her contemplative life in a Benedictine house.

Her father came to the convent to retrieve her and (legend says) she clung to the altar so fiercely that the heavy altar cloths were torn. Clare, however gentle she is portrayed in prayer and devotion, was defiant in her dedication to the contemplative life. She eventually settled in the church of San Damiano, where she and other women became known as the Poor Ladies of Assisi. Clare served as their abbess, the head of the abbey.

Francis’s male followers were itinerant preachers; Clare and the sisters lived a cloistered life of prayer and poverty. For Clare, poverty was foundational to the order’s rule and preserved the purity of the Franciscan heritage. Clare saw poverty as a charism, a gift of the Holy Spirit, which offered the narrow way to enter into the kingdom of heaven.

Clare, dedicated to ensuring the rule of total poverty, lobbied throughout her life for papal approval to ensure the Poor Clare’s Rule of Life. In 1253, Clare received news that the pope sanctioned the Rule. Two days later, she died.

Collect for Clare
O God, whose blessed Son became poor that we through his poverty might be rich: Deliver us from an inordinate love of this world, that we, inspired by the devotion of your servant Clare, may serve you with singleness of heart, and attain to the riches of the age to come; through Jesus Christ our Lord, who lives and reigns with you and the Holy Spirit, one God, for ever and ever. Amen. 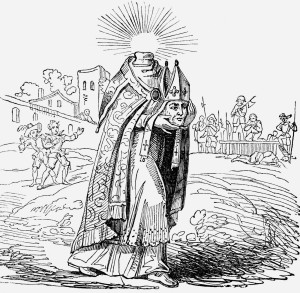 We know very little about Denis, a third-century missionary, martyr, and bishop of Paris. The most famous of his feats is also the most improbable: After being decapitated on Paris’ highest hill (today known as Montmartre), he reportedly picked up his own head and carried it six miles, preaching repentance the entire way. This makes Denis one of about fifty cephalophores— saints who are traditionally depicted carrying their heads in their own hands.

Denis’s story is shot through with myth and mystery. Because his name may have originally been Dionysius, he is sometimes confused with Dionysius the Areopagite, a judge converted by the apostle Paul (Acts 17:34). However, Denis is believed to have been a missionary sent by Pope Fabian to evangelize the Romans living in Lutetia (today’s Paris) along with his two inseparable companions, Rusticus and Eleutherius. The three of them may have settled on the island in the river Seine where Notre Dame was later erected.

In the year 250, the emperor Decius issued an edict ordering everyone in the empire to burn incense to the Roman gods and the emperor. Some Christians complied; others went into hiding, and some openly refused to perform the sacrifice. Denis, along with Rusticus and Eleutherius, may have been among those who refused and were executed. Or maybe they were executed because of their success at converting people to Christianity. Allegedly, Montmartre, the traditional place of their martyrdom, comes from the Latin expression Mons Martyrum (Martyr’s Hill); some reject this etymology as fanciful.

According to tradition, Denis collapsed after hiking (while carrying his head in his hands) some six miles north of downtown Paris. In the fifth or sixth century, his final resting place became a shrine, and a chapel was built. During the twelfth century, the impressive Saint Denis Basilica was erected on the spot.

Denis is the patron of Paris, and his basilica is often the burial place for France’s royalty. In the Roman Catholic tradition, he is one of the Fourteen Holy Helpers—saints whose intercession is believed to be particularly effective against specific diseases. Denis’s special charism is to help people suffering from headaches.

Collect for Denis
Almighty God, we remember before you the life and ministry of your servant Denis, who even in the most extreme of circumstances, continued to preach the good news of your redemption and love. Grant us faithful companions on our journey to you, that we may encourage each other in our earthly pilgrimage with your Son, our Savior, Jesus Christ. Amen.