Congratulations on surviving another looooooooong weekend without Lent Madness voting to anchor your day, ground your faith, and generally infuse your soul with the will to live. The only lifeline we tossed out was a chance to win your very own life-sized cardboard cutout of 2015 Golden Halo winner Francis of Assisi. Learn how here.

Today's pairing involves two saintly souls whose lives overlapped for a period during the mid-19th century. Vida Dutton Scudder, an American laywoman and proponent of the social gospel tangles with F.D. Maurice, a British cleric and defender of Christian socialism. Both were writers and advocates for the poor and downtrodden.

On Friday, we capped off a week of blowouts with Dietrich Bonhoeffer triumphing over Athanasius 77% to 23% to advance to the Saintly Sixteen. Actually, it wasn't an entire week of lopsided results, as last Monday saw the closest battle of Lent Madness 2016 with Columba eking out a victory over Kateri Tekakwitha.

But enough of the recent past. A full week of voting is nigh upon us which will include our first foray into the Saintly Sixteen on Thursday as Helena takes on Constance. Time to vote! 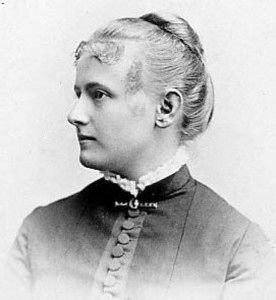 Vida Dutton Scudder was an Episcopalian, educator, writer, social justice activist, feminist, social worker, and proponent of the American Social Gospel Movement. She was born on December 15, 1861, in Madurai, India, to Congregationalist missionaries. When her father died prematurely in 1862, she and her mother returned to their family’s home in Boston. She graduated from Smith College in 1884 and taught English literature at Wellesley College, becoming a full professor by 1910.

Scudder worked tirelessly for peace and for the working class, labor unions, and the downtrodden. In 1890, she founded Denison House in Boston, which provided social services and education to the poor and those in need. She withstood criticism for two controversial stands that she supported: the 1912 textile workers strike in Lawrence, Massachusetts, and the United States’ entry into World War I in 1917.

Over the years, Scudder joined various religious groups that combined social awareness with religious beliefs. In 1911 she was one of the founders of The Episcopal Church Socialist League and 1919 saw her founding the Church League for Industrial Democracy. She was also a Companion in the Companions of the Society of the Holy Cross (SCHC).

Scudder’s later years were dedicated to her inexhaustible writings, illustrating her vast knowledge and interest on topics centering on activism and spirituality. In addition to her autobiography, On Journey, she wrote essays in The Privilege of Age, as well as Socialism and Spiritual Progress: A Speculation; The Christian Attitude Toward Private Property; The Church and the Hour: Reflections of A Socialist Churchwoman; and Socialism and Character.

Of her lifelong dedication to Christianity and to social work, Scudder said, “If prayer is the deep secret creative force that Jesus tells us it is, we should be very busy with it.” She also noted, “Social intercession may be the mightiest force in the world.”

Collect for Vida Dutton Scudder
Most gracious God, who sent your beloved Son to preach peace to those who are far off and to those who are near: Raise up in thy Church witnesses who, after the example of your servant Vida Dutton Scudder, stand firm in proclaiming the power of the Gospel of Jesus Christ, who lives and reigns with you and the Holy Spirit, one God, now and for ever. Amen. 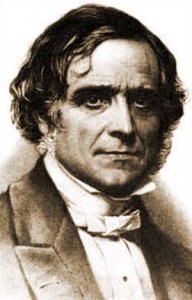 A brilliant thinker but an imperfect communicator, Frederick Denison Maurice influenced many in Victorian England and was a vigorous spokesman for Christian socialism, the idea that greed and capitalism is counter to the teachings of Jesus.

Born in Suffolk, England, in 1805, Maurice was the son of a Unitarian minister. After studying at Trinity College, Cambridge, and earning a law degree, Maurice pursued literary endeavors in London before deciding to enroll at Oxford and study to become an Anglican priest.

Appointed as chaplain to Guy’s Hospital and later assigned to Lincoln’s Inn as a priest, Maurice received a call in 1840 to become professor of English literature and history at King’s College, London. The 1853 publication of his Theological Essays was not received favorably by the principal of King’s College, who declared it theologically unsound. Despite his legitimate protestations, Maurice was found guilty and stripped of his teaching posts.

Although he had worked among society’s wealthiest and most influential members, Maurice also had a deep passion for the poor. Following his dismissal from King’s College, he founded The Working Men’s College and served as its principal from 1854 to 1872. Much of Maurice’s writings on Christian socialism come from this time period. He was also appointed a professor of moral philosophy at Cambridge in 1866.

F.D. Maurice wrote brilliantly and broadly, and his works include commentaries and a series of sermons on The Book of Common Prayer, as well as works on moral philosophy. Famed authors Alfred Lord Tennyson, Lewis Carroll, and George MacDonald knew Maurice well and were influenced by him.

Earnest, passionate, and humble, Maurice was known as a deep thinker, a generous benefactor, a powerful, prophetic voice on behalf of the poor, and a genuinely noble soul.

Collect for F.D. Maurice
Almighty God, who restored our human nature to heavenly glory through the perfect obedience of our Savior Jesus Christ: Keep alive in your Church, we pray, a passion for justice and truth; that, like your servant Frederick Denison Maurice, we may work and pray for the triumph of the kingdom of your Christ; who lives and reigns with you and the Holy Spirit, one God, now and for ever. Amen.