The last full week of Lent Madness begins right now. But do not despair as there are many miles to walk and votes to cast before we  sleep and/or award the coveted Golden Halo.

Today is the last matchup of the Saintly Sixteen as Dietrich Bonhoeffer and Barnabas for the final spot in the Elate Eight. To make it to this point, Bonhoeffer easily defeated Athanasius while Barnabas rocked Elmo's world.

Tomorrow we begin the Elate Eight aka the Round of Saintly Kitsch. Will the Kitsch Kranks come out in full force? Will it be Kontroversial? Stay tuned as the Saintly Smackdown continues at its usual Krazy pace! 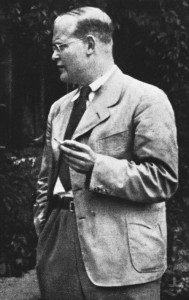 Dietrich Bonhoeffer’s writing continues to inspire and sometimes convict us 71 years after his martyrdom.

On our relationship with God and Scripture:

“I bury myself I work in a very unchristian and immodest way. A crazed ambition, which some have noticed about me, makes life difficult…Then something else happened, something that up to this day has changed and rearranged my life. I came for the first time to the Bible…I had already often preached; I had already seen much of the church, even spoken and written about it- and still I had never become a Christian, but instead was very furiously and unrestrainedly my own Lord…Also I had never prayed, or only very little. I was with utter abandonment entirely content with myself. The Bible has liberated me from that, and especially the Sermon on the Mount. Since that time everything has become different.” From a letter to Elisabeth Zinn Dietrich Bonhoeffer Works (DBW 14)

“It is only because he became like us that we can become like him.” From Discipleship (DBW 4)

On our relationships with one another:

"The first service that one owes to others in the fellowship consists of listening to them. Just as love of God begins with listening to his word, so the beginning of love for our brothers and sisters is learning to listen to them." From Life together (DBW 5)

“The church is only the church when it is there for others…It must participate in the worldly affairs of the human social order, not ruling but helping and serving.” From Outline of a Project (DBW 8)

“In normal life we hardly realize how much more we receive than we give, and life cannot be rich without such gratitude. It is so easy to overestimate the importance of our own achievements compared with what we owe to the help of others.” From Letters and Papers from Prison (DBW 8)

“We pray for the big things and forget to give thanks for the ordinary, small (and yet really not small) gifts.” From Life Together (DBW 5)

And, as we wrestle with racism, theologian Renate Wind helps us to see that we haven’t come as far as we’d like to think:

“Bonhoeffer spent time in 1920 and 1931 at Union Theological Seminary in New York City. He was chilled by the bourgeois white churchliness of conservative America. But, in the local communities of the “other America,” he found evidence of the church he was searching for. The storefront churches and self-help centers of Harlem and the ecumenical and cosmopolitan atmosphere of the seminary impressed Bonhoeffer.” From Who is Christ for Us? 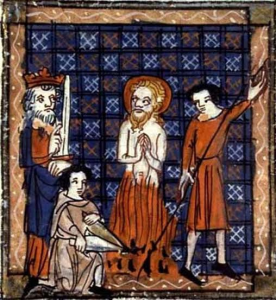 Although the biblical depiction of Barnabas is somewhat limited, his kindness and fidelity that suffuses that presentation led to many texts being written in his name. These texts give us a sense of how Christians throughout the ages drew strength and encouragement from Barnabas’ example. He has continued to be for us a “son of encouragement.”

One of the earliest texts bearing Barnabas’ name is the Epistle of Barnabas. This short work was likely written in the early second century. The text demonstrates a deep knowledge of the Jewish scriptures and offers a host of creative Christological reflections. The letter is often a litany of biblical texts with brief commentary on the side. At one point in the letter Barnabas offers what was perhaps his rationale for selling everything and giving it to the fledgling Jesus community. He sagely writes, “You shall share everything with your neighbor, and not claim that anything is your own. For if you are sharers in what is incorruptible, how much more so in corruptible things!”

The Acts of Barnabas (likely written in the 5th century) again shows us how Barnabas was remembered. The short work recounts some biblical stories with greater detail and then describes the journeys of Barnabas and John Mark after their parting with Paul. The dispute with Paul is far more cordial than described in Acts with Barnabas calmly arguing, “The grace of God will not desert one who has served the Gospel.” The text includes a beautiful reflection on what it means to be clothed in Christ at baptism – “There is in it nothing filthy, but it is altogether splendid.” The Acts also depict his martyrdom by burning and how he was buried with his copy of the Gospel of Matthew (a Gospel that is, like many of the writings that bear Barnabas’ name, rooted and grounded in the Jewish scriptures).

The final text that bears Barnabas’ name is a late text, likely post-Medieval. The Gospel of Barnabas, which only survives in Italian and Spanish translations, perhaps offers the most important message for us today in the West. At a time when Muslims are routinely denigrated and anti-Muslim rhetoric is on the rise, perhaps we would do well to remember Barnabas’ commitment to seeing the best in people, be they Paul the Apostle or his friend (cousin?) John Mark. In this Gospel, Barnabas presents a Jesus who is sympathetic to Muslim belief and practice. Barnabas’ example as a bridge-builder between people and communities is very much needed today.

130 comments on “Dietrich Bonhoeffer vs. Barnabas”