Welcome to the Round of the Saintly Sixteen. Sixteen saints in Lent Madness 2016 have been sent packing and sixteen more remain as the struggle 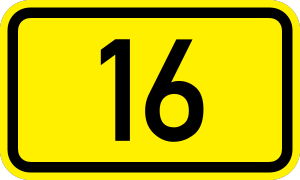 for the coveted Golden Halo continues. Get ready for some high stakes, thrilling saintly action over the coming days. Click the Bracket tab to view the updated tournament bracket and see all the upcoming matchups (you do know it's updated daily by our unsung Bracket Czar Adam Thomas, right?).

Round One consisted of basic biographical information about the saints. Since there’s no need to rehash previously covered ground, the Round of the Saintly Sixteen is made up of what we call Quirks & Quotes. Prepare for some little known facts or legends accompanied by quotes either by or about the saint in question. As you make your decision, you can always review the previous rounds by again clicking on the Bracket tab and scrolling down. Simply click the link to the previous battle and voila! All the earlier information is at your fingertips.

Yesterday saw the conclusion of the first round as Barnabas defeated Elmo 72% to 28%. Apparently Barnabas did not include Elmo as he sang the irritating song about being "a happy family." Who knew?

Today it's two women, separated by 1,600 years or so, squaring off to make it to the Elate Eight. To get to this point, Helena defeated Monnica in the Matronly Meltdown (the very first matchup of Lent Madness 2016) while Constance defeated Dominic. Ladies and gentlemen, start your Saintly Sixteen engines! 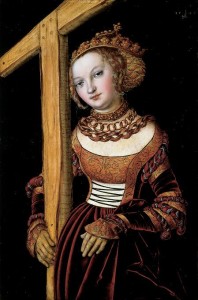 Helena, mother of Constantine, church-builder and relic-hunter extraordinaire, had an early life shrouded in mystery. St. Ambrose says she was a stable-maid; others just hypothesize she was poor. And it is also not clear where she met Constantine’s father.

One story posits that the Roman emperor was on a military campaign through Asia Minor, when he chanced upon Helena who was wearing matching silver bracelets to his own. Constantius took this as a sign from God that they were meant to be. Aw.

Sadly, this bracelet-magic-feeling didn’t last. He either divorced her, sent her away, or just broke up with her in 289, after Constantine was born, because the emperor wanted a wife of noble birth. Helena and the baby Constantine stayed with the former emperor Diocletian during their exile, which couldn’t have been a pleasant experience, given his penchant for executing lots of people. It is for this reason that Helena is the patron saint of divorced people, and people in difficult marriages.

After Constantine’s ascension to power, Helena came into her own in the second act of her life. She went to Palestine and built churches, searched out relics, and used the imperial treasury for the relief of the poor.

She had the Roman temple Hadrian had constructed over Golgotha torn down. Underneath the temple, she and her team found the shards of many crosses. (This is not surprising--according to modern archeology, that site was used extensively as a crucifixion ground.)

Determined to figure out which was the cross of Christ, Helena had a dying woman brought to the site, and presented her with various pieces of wood. When she was miraculously cured by one piece in particular, Helena declared that they had found the True Cross. It was here that she had the Church of the Holy Sepulchre built.

On her way back to Rome, Helena had several other saintly adventures. As she passed through Cyprus, a local monastery asked for her help in ridding the place of snakes. Accordingly, she imported several dozen cats, which have since multiplied in that place, and to this day, the monastery is known as St. Nicholas of the Cats.

It should also be noted that in classic British fashion, England also lays claim to Helena.
One story of her origins holds that Helena was actually the daughter of the English king, and she met Constantius when her father formed a strategic alliance. Further legends hold that she would frequently turn up back in her homeland. Over 25 wells and springs of water throughout Great Britain are named for her, and according to legend, she is credited with establishing several churches around Colchester.

No matter where she turned up, Helena spread generosity and strength to all she encountered. 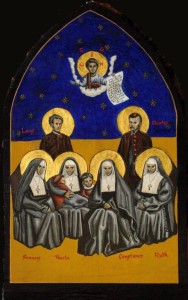 Think about this: Mosquitoes transmit yellow fever by biting their victims. Think of the Mississippi River as a grand breeding ground for these miniature vampires on the banks of the town of Memphis. In the first stages, symptoms are much like the flu: fatigue, malaise, nausea, vomiting, muscle aches, and loss of appetite. If the body does not fight the infection, the patient enters into a toxic phase that causes organ damage, yellowing skin, bleeding from the nose, mouth and eyes, liver and kidney failure, and brain dysfunction. Remember, it is 1878 and modern medicine is not available to Constance and her companions. All they have is their love and care to give to the people of Memphis. Constance Would Go.

With thousands of people dying in Memphis, despite the ministrations of the sisters, a new problem arose: the growing orphan population. It is said that Constance and her Companions would go through the city searching for the orphans to place them in an asylum to care for them as their parents had passed. At one point, a mob of adults confronted Constance and her Companions out of fear that these orphans would spread the yellow fever to families who were living near the asylum. Wrapping her faith in God around her like armor, and brandishing her faith like a sword, she called out to the mob saying, "Sirs, is it possible that you would have us refuse to these children the very protection you have obtained for your own? We do not propose to make a hospital of the Asylum; if any of the children are taken ill with the fever, they shall be carried immediately to our Infirmary at the Church Home." The mob would bow before her resoluteness and allow the children to pass to the safety of their new home. Constance Would Go.

Constance and her companions held firm five goals during the Yellow Fever Epidemic:
To feed the hungry,
To care for the sick,
To minister the dying,
To bury the dead,
And to care for the orphans.

On September 5th, 1878, the yellow fever would claim new victims: Constance and several of her sisters. It is said that while she lay dying, she would pray: "O God, make speed to save; O Lord make haste to help us."

PS from Anna: We fully expect the SEC to add bumper stickers with "Constance Would Go" to the Lentorium following this year's bracket.

185 comments on “Helena vs. Constance”