Wake up! Lent Madness is back for another full week of saintly, halo-busting action. We begin with the third matchup of the Saintly Sixteen, where we continue to encounter saintly Quirks and Quotes, as Methodius faces Albert Schweitzer. To get to this round, Methodius beat his brother Cyril in the Slavic Smackdown® while Schweitzer grilled Lawrence.

The winner of this battle will join Constance and Absalom Jones (who squeaked past Joseph on Friday 52% to 48%) in the Elate Eight.

We do hope everyone successfully made it through another weekend of Lent Madness Withdrawal (LMW). This is not an affliction to joke about as many of the Lent Madness faithful have suffered deep emotional scars from the lack of voting for 48 hours. The Supreme Executive Committee keeps a slew of Lent Madness chaplains on call 24 hours a day over the weekends of Lent. We have the number around here somewhere... 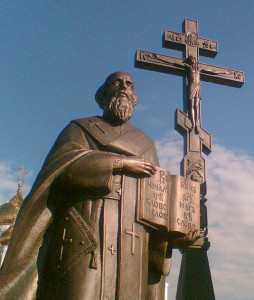 Saint Methodius – patron saint of all of Europe, not too shabby – is often best known for being paired with his little brother, Cyril. Together they took the Gospel into the Slavic regions of Europe, helping the people to experience word and sacrament in their native languages.

This would be enough for some, but not for Methodius.

Methodius’ ministry without his brother was also filled with excitement and passion for a church that changes and adapts to new languages and cultures.

Following Cyril’s death, Pope Adrian II appointed Methodius as Archbishop of Moravia and Pannonia. Suffice it to say that the German bishops in the area were not fans.

Archbishop Methodius stood as an advocate for inculturation: the idea that “every people must integrate the message revealed into its own culture and express its saving truth in its own language” (Pope Benedict XVI). He continued to invite the people to worship and experience Scripture in their own language and culture. Those who opposed him believed that the Latin language and mindset (“the way we’ve always done it”) was the only way to experience the Gospel.

Methodius was imprisoned for two and a half years following an ecclesial trial in the presence of King Louis of Bavaria. Eventually, a legate from Pope John VIII settled the issue, declaring the legitimacy of Methodius’ appointment as Archbishop.

After Methodius’ death, his successor (who had served as his coadjutor) exiled all Methodius’ disciples – those who advocated the use of the vernacular for Scripture and liturgy. But the work Methodius had done in his life – his continued advocacy for a culturally and linguistically literate church – could not be stopped.

As Metropolitan Kallistos Ware observed, “Few events have been so important in the missionary history of the Church” as the missionary work of Methodius (both with and without his brother). The fruits of Methodius’ ministry can be seen to this day not only in the churches which continue to worship in Slavic, but in all churches who seek ways to speak the Good News in new and changing cultures. 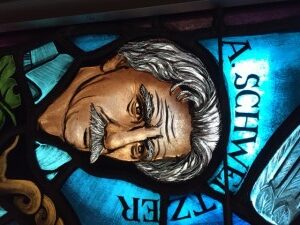 Albert Schweitzer was 19-years-old studying theology at Strasbourg when he had an epiphany. He was reading Matthew 10 in Greek. As Jesus sends out and receives the disciples, he tells them, “Cure the sick, raise the dead, cleanse the lepers, cast out demons. You received without payment; give without payment.” Schweitzer understood these words to be a call on his life as well.

He would later write, "You must give some time to your neighbors. Even if it's a little thing, do something for those who have need of a another’s help, something for which you get no pay but the privilege of doing it." 11 years later, as a medical doctor, he would move with his family to Lambaréné in French Equatorial Africa (modern Gabon) and begin to live out that commission.

While in Africa, and while Albert Einstein was working on a scientific explanation that would explain and link together all physical aspects of the universe, Schweitzer was developing an all-encompassing moral theory that he called “Reverence for Life.” He wrote of this ethic, “It is good to maintain and further life; it is bad to damage and destroy life. And this ethic, profound, universal, has the significance of a religion. It is religion."

In many ways this ethic was way ahead of its time. Schweitzer was not only concerned with human life but with all life. He wrote, "People are ethical only when life, as such, is sacred to them, that of plants and animals as that of their fellow human beings, and when they devote themselves helpfully to all life that is in need of help." Elsewhere he said, “Until people extend their circle of compassion to include all living things, they will not themselves find peace.”

This reverence for life was not just a theory. It was also lived out. His obituary in The New York Times reported, “Lambarene was suffused with Reverence for Life to what some critics thought was an exaggerated degree. Mosquitoes were not swatted, nor pests and insects doused with chemicals; they were left alone, and humans put up with them. Indeed, building was often brought to a halt lest nests of ants be killed or disturbed.”

Later in his life, Schweitzer would devote himself to working against the proliferation of nuclear weapons. He would write numerous letters to presidents and other world leaders imploring them to give up the quest for bigger and more powerful weapons. His Nobel Peace Prize was awarded in part for this work

129 comments on “Methodius vs. Albert Schweitzer”