There's still one vote to go and a full twenty-four hours before full onset Lent Madness Withdrawal (LMW) sets in! So make this one count as Roch faces Julian of Norwich. Will this battle go to the dogs? Or will all manner of things be well?

To get to this round, Roch defeated Gertrude while Julian snuck past William Wilberforce. The winner will face Albert Schweitzer in the Elate Eight. While yesterday, Sojourner (Nothing but the) Truth slammed the door shut on Frances Joseph Gaudet 67% to 33%.

After a full week of Saintly Sixteen action, we have just two more slots up for grabs in the Elate Eight. Today's battle will decide one of them and on Monday the last matchup of this round will see Dietrich Bonhoeffer take on Barnabas. The field is narrowing as the chase for the coveted Golden Halo continues. 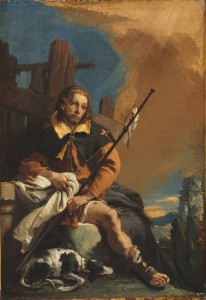 On the day that Roch/Rocco/Roque snuck by Gertrude for the win, our house was infected with a modern plague: the flu. As we lay weeping and gnashing our own teeth and shamelessly wanting our mommy (this is the 40-year-old talking), our dog got out and was attacked by another animal. In the midst of the plague, my dog needed surgery for five puncture wounds and as I write, he lays at my feet, recovering. He is a good dog.

For a saint that I did not know well going into Lent Madness, Roch seems to be having a rather profound impact on my house in big ways. I cannot help but reflect on the irony of lifting Roch up in the blogging world as plagues and an injured dog infiltrate my world. Such is life. However, this post is not about me, it is about the quirks and quotes of St. Roch.

As I read the MANY comments following Roch vs. Gertrude, several made me laugh--it seems as though a number of readers were deeply appreciative of Roch's well-formed thigh and dashing pose. Alas, while Roch may look like he is attempting a Calvin Klein bid, in truth the artists of the times display his shapely thigh to show the plague scars. Being unashamed to show the ravages of his disease was an expression of being intimate with the suffering of Christ. Enduring disease and infirmity were seen as a path to martyrdom. The people saw a seemingly healthy individual, albeit scared, as a promise for curing of their own illnesses and disease. Here was proof of God's healing grace in the world.

Lest you think invoking Roch will only ward off illness and disease, his name has also been invoked to ward off vampire attacks.

So, the next time you have the flu or other illness, or the zombie apocalypse is imminent, you can pray to St. Roch, weep and gnash your teeth, and your suffering will show your solidarity with Christ's agony on the cross. You see, we are all saints... 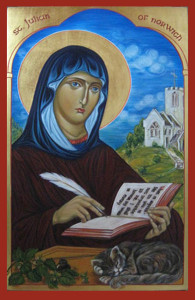 As an anchoress in medieval England, Julian of Norwich got to do something most of us only dream of—she went to her own funeral!

The occasion of her being sealed into her cell would have been marked with a momentous liturgy, including a vigil, mass, chanting, and a procession to the anchorage, concluding with a funeral service where Julian would have received the last rites, both symbolic of her death to the world, and pragmatic, since a priest would not be permitted to enter the cell later.

The only thing that prevented her complete isolation from the world were three windows in her cell. One, called the Squint, opened into the church so she could receive communion and follow the services. The second allowed her attendant to deliver food and empty the chamber pot. The third window provided visitors a way to talk to Julian, and if I had been alive then, I certainly would have wanted to!

Julian held a surprising and profound view of sin, especially for her time. On the one hand, she considered self-awareness of our sinful nature to be excruciating: “And to me was shown no harder hell than sin. For a kind soul has no hell but sin.” And yet, she considered sin as an expedient to understanding God’s love. “We need to fall, and we need to be aware of it; for if we did not fall, we should not know how weak and wretched we are of ourselves, nor should we know our Maker's marvelous love so fully.”

Though they pain us, our sins in no way damage God’s love for us, which is ever near: “For as the body is clad in the cloth, and the flesh in the skin, and the bones in the flesh, and the heart in the whole, so are we, soul and body, clad in the Goodness of God, and enclosed.”

In one of her visions, she described seeing a tiny thing in God’s hand, the size of a hazelnut, and understood it was the whole of God’s creation. It seemed so fragile to her that she asked how it could survive. She was told that everything that exists has its being through the love of God.

Perhaps because of this optimistic vision she received, Julian’s end-time view was radically different than most of the church in her day—not one of doom and destruction, but of mystical hope: "It appears to me that there is a deed that the Holy Trinity shall do on the last day…and how it shall be done is unknown to all creatures under Christ…This is the great deed ordained by our Lord God from eternity, treasured up and hidden in his blessed breast…and by this deed he shall make all things well.”

151 comments on “Roch vs. Julian of Norwich”