The Elate Eight continues today as Sojourner Truth takes on Absalom Jones. Unfair? Of course! It's Lent Madness after all.

To make it to this point, Sojourner sojourned her way past Soren Kierkegaard and Frances Joseph-Gaudet while Absalom sailed past Matthias before sneaking by Joseph.

Yesterday, Constance became the first Lent Madness 2016 participant to reach the Faithful Four, defeating Vida Dutton Scudder 61% to 39%. It's safe to say that, in Constance, we truly do have a Cinderella of this year's bracket! She'll face the winner of Albert Schweitzer and Julian of Norwich in the Faithful Four.

And speaking of brackets and Cinderellas, don't miss our saintly analysis of the NCAA college basketball tournament in Lent Madness meets March Madness. The march to the Faithful Four continues! 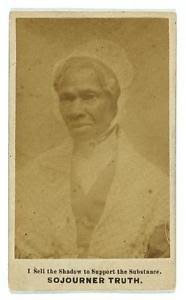 Sojourner Truth is so awesome that her kitsch itself is precedent-setting. For example, Sojourner is the first Black American woman to have a bust in the US Capitol, which is pretty neat. (Despite the fact it took until 2006 to get this done. I’m going to ignore the fact you were really late to the party, US Capitol folks, and just celebrate you decided to show up at all.)

During her lifetime, Sojourner made her own kitsch. That’s right--that’s how awesome she was. In the late 1800s, it was customary for photographers to retain the rights to the photos they made. However, Sojourner had none of this. Like an early media maven, she demanded the rights to her own name and image, and sold photo cards of herself at all her speaking appearances, as an extra way to make money. For a former slave, this was an incredible way to assert autonomy over herself, and set a powerful precedent about her right to be reckoned with on her own terms. These photo cards are available on eBay, and the quote she includes on them “I sell the shadow in order to support the substance” is dead-on. The lady did not mess around. 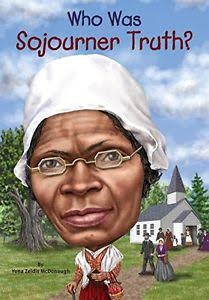 Of course, after her death, lots of other people messed around all over the place. Hence, the rise of some really curious memorabilia. Sojourner dictated her own autobiography (entitled The Narrative of Sojourner Truth, naturally) and her life was really sad and violent, but this did not stop a surprising number of children’s biographies about her from hitting the streets. Including this one with a truly frightening cover. 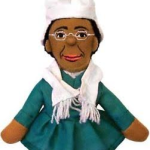 In keeping with the “teach the children” theme, there is also a finger puppet, for the non-literate set. (Head is normal size.)

And if you prefer to educate people indirectly, there are Sojourner Truth 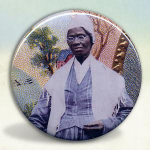 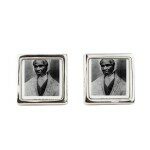 and a Sojourner Truth pocket mirror. (Because nothing screams “Prophet of God’s Radical Love!” like cufflinks.) 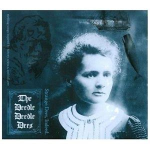 But maybe music is what you prefer? Lots of musical artists have found Sojourner’s life inspiring, including (not making this up) The Deedle Deedle Dees, who have a song about her on their album, which also features such feel-good dittys as “Phineas Gage Has Something To Tell These People” (yup) and the classic “Mayor LaGuardia’s Stomach” (of course.)

Less upsettingly, there is also Langston Hughes (yes! that Langston Hughes!) who has a recording in which he recounts events in Black history, including Sojourner’s life. His stories are interspersed with freedom songs and chants, by people like Leadbelly and others.

But I have saved the most spectacular for last. I ask you to cast your mind back, back to a 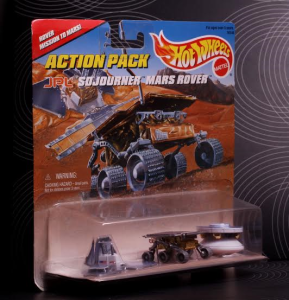 simpler time in the late 1990s, and the first time we sent a robot to Mars. That’s right! Sojourner Truth has a space robot named after her!!!!

The Sojourner JPL Rover, as named by a 12-year old girl in an essay contest, landed on Mars, and then was promptly never heard from again. (Whoops). But, this did not prevent its extensive merchandising, including HotWheels! 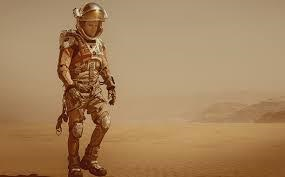 And, in the movie The Martian, when Matt Damon needs some high-tech rescuing; when he is stranded alone, afraid, and in need of a friendly voice, who saves the day?

Even in the imaginary world of near-future science fiction, Sojourner Truth manages to bring hope and love to the furthest reaches of the human experience. 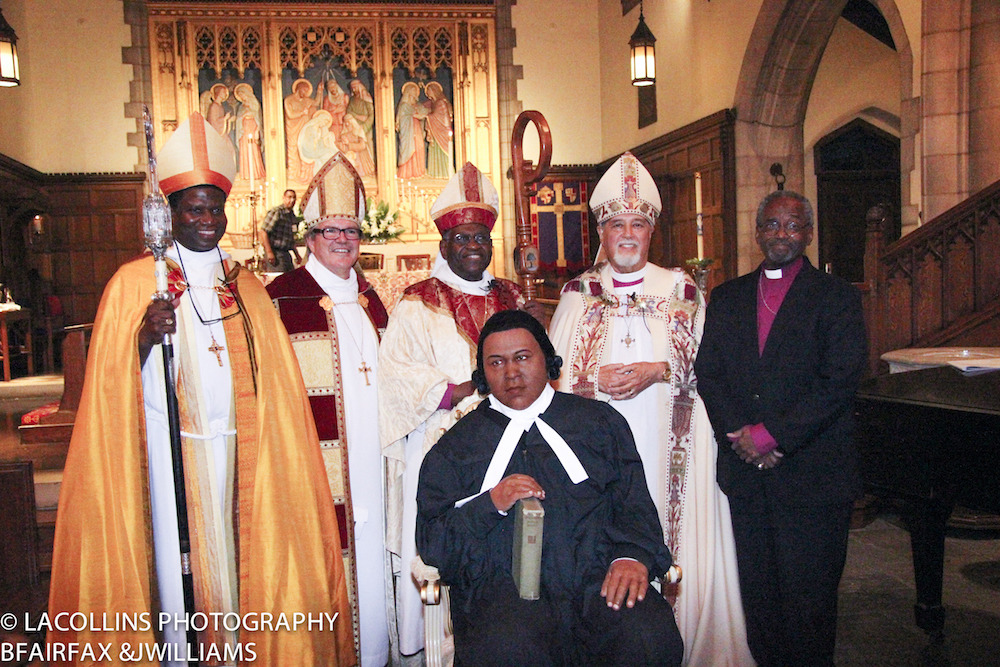 On January 1, 1808, the Rev. Absalom Jones stood on the lectern of Philadelphia’s African Episcopal Church of St. Thomas (then located at the corner of Fifth and Adelphi streets) and gave a rousing sermon. He wasn’t there to talk about slavery and bondage. He was there to speak about deliverance!

Born a slave, Absalom worked during the night for many years in order to buy his wife’s freedom, and 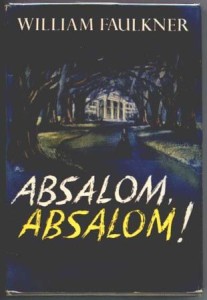 later his own. He was industrious. With his master’s permission, he went to school to learn how to read and write. Perhaps this is why you can now see his wax likeness at the Great Blacks in Wax Museum in Baltimore. The statue's unveiling took place at a meeting of the Union of Black Episcopalians at the Diocese of Maryland's Cathedral of the Incarnation

Absalom Jones loved the church. He became a lay minister at the interracial congregation of St. George's Methodist Church. He was one of the first African Americans licensed to preach in a Methodist church. Perhaps this is why William Faulkner wrote a book titled Absalom, Absalom! 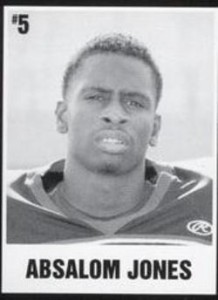 Absalom Jones knew that being a Christian entails having a higher standard! When he and other African-Americans were asked to move to the balcony of the church, he and all the others decided to walk out—an action that resulted in the formation of the Free African Society and the African Episcopal Church of St. Thomas. Perhaps this is why he apparently loved football.

Absalom Jones was charitable. When Philadelphia was struck with yellow fever ("Absalom Would Go?"), Absalom 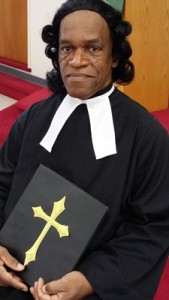 Jones assisted Dr. Benjamin Rush in helping people afflicted by the plague. Jones' corps of black Philadelphians helped nurse the sick, as well as bury the dead. Jones sometimes worked through the night taking care of the sick. During those days, almost twenty times more black people helped the plague-struck than did whites. Perhaps this is why he was once portrayed in a "Testimony Dance Drama" at a church in North Carolina. 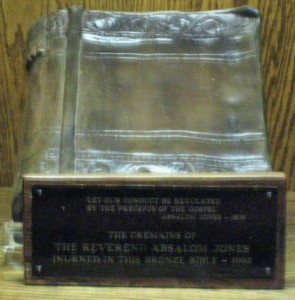 Although Absalom Jones died in 1818, the issue of his time, slavery, points directly toward our day. How much would he have enjoyed seeing the Thirteen Amendment being ratified, hearing Martin Luther King speak at the Lincoln Memorial, watching Barack Obama’s presidential inauguration! Perhaps this is why his ashes are are kept on display in a bronze, Bible-shaped box in a chapel dedicated to him at the church he founded in Philadelphia.

Jones finished his 1808 sermon with this heartfelt prayer: “Give peace in our day, we beseech thee, O thou God of peace! And grant, that this highly favored country may continue to afford a safe and peaceful retreat from the calamities of war and slavery, for ages yet to come.”