Last week, Americans were glued to their televisions each night watching the Republican convention. This week, we all tuned in to watch the Democrats. Here at Lent Madness HQ, we're equal opportunity humorists, because just as America is made up of red states and blue states, so too purple is made up of red and blue.

We shared our insights about Lent after watching the Republicans ("Make Lent Great Again!"), so now it's time to share what we've learned from the Democrats about Lent. While The Donald is about making things great, Hillary's people are always saying, "I'm with her." So let's see how we can all say, "I'm with Lent." 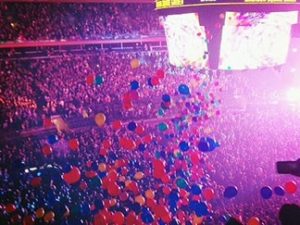 1. Balloon drop. Let's face it, the balloon drop at the end of conventions is a cliché, but it's an awesome cliché. So how about a balloon drop at the end of Lent? That's just what the Easter Vigil needs, some more drama.
2. Star power. Lots of people hate Lent. We don't, but we know people who do. It's understandable, with all the fasting and discipline. So how about a star-studded preaching series? People would love Lent if the sermon was delivered by Episcopalian Sam Waterston or if Morgan Freeman was a lector.
3. Video montage. Why do we spend so much time working on carefully crafted intellectually engaging sermons? In the age of video, we should just go ahead and switch over to heart-warming video montages.
4. Better music. Let's face it, not everyone loves Lenten hymns. So maybe a number by Katy Perry would fetch a few more people to church. At least one of her hits doesn't even require a new chorus. We roar our sins to God, right? Katy can lead us, in her own words, "Oh oh oh oh oh oh oh oh / Oh oh oh oh oh oh oh oh / Oh oh oh oh oh oh oh oh /You're gonna hear me roar!"
5. Make shortcomings cool. Bloomberg got applause for saying that no one party has all the answers. Obama admitted that we all make mistakes. So next time you mess up, just go to a podium in front of thousands of screaming people and coolly admit your error.
6. Unity. The next time people seek to shout down the preacher on, say, the Third Sunday in Lent, encourage your fellow pew-mates to drown them out with cheers of "Lent is Great! Lent is Great!"
7. Grape Juice. Yes, Hillary is a Methodist. If you've given up alcohol for Lent, you'll be in good company when you're invited to a state dinner 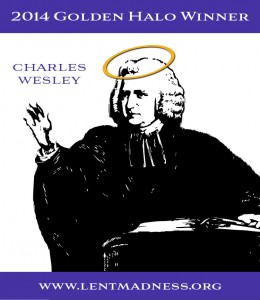 and have to suck down Welch's. At least Charles Wesley is a past Golden Halo Winner.
8. Delete your sins. Forget confession and absolution. Time to modernize. Just write your sins in an email and immediately delete it. You just have to hope Trump doesn't get the Russians to reveal your sins.
9. Historic first! Lots of people are understandably excited about the first-ever woman to be nominated by a major party. But Lent Madness as already broken the stained glass ceiling with the crowning of Mary Magdalene as the Golden Halo winner in 2012. So in addition to Hillary Clinton as a role model for girls who might aspire to be president, we can look at Mary Magdalene as the role model of changing the world by proclaiming the Resurrection first. Sure, "nominee for president" is impressive, but so is "apostle to the apostles."
10. #Hashtags. Everyone needs a Lenten discipline, and it's high time for some new ones. Democrats love their hashtags. Every self-respecting Democrat knows that you can take a stand from the comfort of your own couch with the use of a simple hashtag. So let's all learn from them and agree to use hashtags more. #ImWithLent

Surely we can all agree that this election cycle is going to be grueling. So when you are filled with despair, we're here for you. Laughter is always a balm for the soul, so maybe you'll want to binge-watch past episodes of Monday Madness. Or maybe you'll want to practice the All-American custom of retail therapy as you visit the Lentorium. And remember, along with Election Day in November, you can look forward to All Brackets' Day on November 3, when the 2017 bracket will be revealed to the world.