John Wycliffe vs. Moses the Black

Did you miss us? Well, we're back for the first full week of Lent Madness action! Hopefully you survived the past 24 hours with no voting -- we know it can be tough on the Lenten psyche.

One thing you may not know is that our Bracket Czar, Adam Thomas, wakes up early every morning to updated the online bracket. This is a great service to you, faithful voters, because he also posts links to all the previous battles. This will come in especially handy in subsequent rounds when you want to revisit those early rounds as you make an educated choice based on the all saintly write-ups.

In case you missed the news on Facebook or Twitter, Mechtild of Magdeburg easily swept past Isaac the Syrian on Saturday 77% to 23% to advance to the Saintly Sixteen. A few folks have lamented about the lack of close contests in the first round. This happens sometimes but...just wait.

“The morning star of the English Reformation,” John Wycliffe is best known for his translations of the Vulgate into Middle English and his attempts to reform church structures in England. A philosopher, theologian, professor, and translator, Wycliffe was condemned by the Council of Constance after his death—his bones were dug up and burned.

Born in England in the mid-1320s, Wycliffe centered his life and work at Oxford University—his intellectual home and frequently his physical address. He came of age during the Black Death, living through the upheaval caused by the plague. The dramatic changes caused by the Black Death prompted many cultural questions, and Wycliffe extended his questioning into theology and church organization. Wycliffe was drawn to the Platonist spirit of Augustine of Hippo—students frequently referred to him as “John of Augustine.” Under the influence of both Plato and Augustine, Wycliffe added his voice to a growing undercurrent in medieval theology that questioned the political power, the wealth, and control of the clergy embodied in the hierarchy based in Rome.

Contrary to popular belief, there was no official blanket ban on translating the scriptures into the languages of the common people. However, most of these texts either contained commentary clarifying Church teaching or were paraphrases written from the perspective of Church teaching. Wycliffe rejected any kind of clerical control and issued his new literal translation in order to separate the word of scripture from the Church’s interpretation of it. This position drew the wrath of church authorities and a condemnation by the Archbishop of Canterbury, Thomas Arundel.

Wycliffe protested the wealth and political power of the Church and advocated for a religious institution stripped of its wealth, lands, and titles that would be under the authority of the king and the nobles. Not surprisingly, theologically sympathetic, powerful nobles protected him from enemy clerics. Toward the end of his life, Wycliffe’s teachings against the conventional understanding of the sacraments, including the physical presence of Christ in the Eucharist and the necessity of confession, turned many of his former political allies against him.

Collect for John Wycliffe
Stir up in us, O God, the zeal for your Word that inspired your servant John Wycliffe that we, like him, may boldly challenge stifling systems and cling to the promises of your power and presence; through Jesus Christ our Lord. Amen. 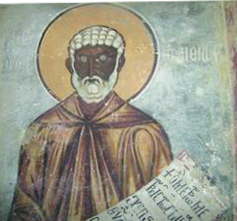 Moses the Black was born in Ethiopia around 330. As a young man he left Ethiopia for adventures in Egypt. A servant to a wealthy Egyptian landowner, Moses surreptitiously stole from his boss, lining his pockets with the profits. When the man discovered Moses’ perfidy, he expelled Moses from his house.

Moses, a large and formidable man, gathered around him other bandits. Together they robbed and harassed people living in the Egyptian countryside. As he was fleeing the authorities, he took refuge among monks in Sketes, a desert community outside of Alexandria. Inspired by their contented piety, Moses converted to Christianity and renounced violence and carousing.

Sometime later, when four robbers assaulted the monastery, Moses stood his ground and tied up the would-be thieves, bringing them to the brothers to ask advice about the robbers’ punishment. He suggested that it would not be very Christian to repay violence with violence. The robbers were so moved by the compassion of the monks that they joined the monastery. On another occasion, Moses was summoned to a council to pass judgment on a brother. Going to council reluctantly, Moses carried a leaking jug of water into the meeting. His brothers were perplexed; Moses replied that his sins follow behind him but he did not see them and yet he was coming to judge another. The brothers were moved by this gesture and forgave the offending monk.

Moses ultimately became abbot of a community in the desert, and despite enduring racist stereotyping, he was later ordained a priest. In 405 he was warned of marauding Berbers plotting to attack his monastery. Moses sent all but a few of the monks from the monastery, insisting that the building and the brothers would not respond to any attacks with violence. “Those that live by the sword die by the sword,” he reminded his brothers. He and the remaining cohort of monks welcomed the bandits with open arms and were killed.

In his recounting of the ancient church, historian Salminius Sozomen remarked of Moses, “No one else ever made such a change from evil to excellence.” Moses is a shining example of the transformative power of the gospel and is the patron saint of nonviolence.

Collect for Moses the Black
Almighty God, whose blessed Son guides our footsteps in the way of peace: Deliver us from paths of hatred and violence, that we, following the example of your servant Moses, may serve you with singleness of heart and attain to the tranquility of the world to come; through Jesus Christ our Lord, who lives and reigns with you in the unity of the Holy Spirit, one God, now and forever. Amen.

John Wycliffe vs. Moses the Black

285 comments on “John Wycliffe vs. Moses the Black”