Moses the Black vs. Raymond Nonnatus

Today the Saintly Sixteen continues as Moses the Black faces Raymond Nonnatus and legends abound! These two fascinating souls have much to teach us about non-violence, passing judgment, and idle gossip. Yet only one will make it to the next round.

To make it this far, both saints vanquished Johns as Raymond routed John of Nepomuk while Moses took it to John Wycliffe. Is this tidbit a harbinger of saintly things to come? Probably not.

Yesterday, Mechtild of Magdeburg secured her place in the Elate Eight 52% to 48% by holding off a late charge by Odo of Cluny.

In case you missed yesterday's episode of Monday Madness, in which Tim and Scott offer a rare glimpse behind the SEC's purple curtain, you can watch it here.

And finally, Episcopal News Service scored a journalistic coup by gaining an exclusive interview with both members of the SEC. Read the Q & A under the title Lent Madness Duo Shines Competitive Spotlight On Saints' Inspiring Stories. And thanks to you all for being a part of the ever-unfolding Madness this year!

To paraphrase an ancient biographer, to the degree that Moses was a wayward soul, so great also his virtue. Moses is remembered as a thief and a murderer, a marauder and a womanizer. The ancient hagiographer Laurence remarked that Moses was “unrivaled for cruelty.” Another described him as “vulgar and worthless.”

“Spurred by some crisis,” Palladius tells us, Moses traveled to the monastery in Skete and was received by the monks there. Moses gave himself entirely to ascetic practices, training his body to be a pure temple. At night Moses especially struggled with temptation. First he tried to avoid sleeping. When this was ineffective, Moses began using the night to go fetch water for the other monks. He would walk as far as two miles to fill his jug to bring water back to the brothers. Serving the community in this way he found strength to resist temptation. It was not without cost, however. He had already denied his body excessive food and was traveling many miles each night. One evening he collapsed at the well, weary from the physical toll (ancient sources recount how he collapsed after a fierce struggle with the devil). His brothers found him and brought him back to the monastery. It took over a year for him to recover.

With such discipline, Moses grew to the point where he no longer struggled with temptation. Palladius gives us the memorable line that “we are more afraid of flies than he of demons.” Previously Moses was a formidable specimen who would take what he wanted with brute force. Now he was a model of hospitality, kindness, and nonviolence.

One story tells of how the monks at Skete were ordered to observe a fast for a week. That same week some brothers from Egypt came to visit Moses. Moses prepared for them a small cooked meal. The neighbors saw the smoke rising as Moses cooked and complained to the clerics. The following weekend, the clerics called Moses to stand in front of the community and pronounced, “O Father Moses, you have broken the command of men but observed that of God.”

One of Moses’ highest values was to avoid judging others. We have already seen how he refused to pass judgment on a brother by carrying a leaking basket to the meeting. Moses is remembered as saying, “If we are able to see our own faults, we will not see the faults of our neighbors. For it is folly for someone what has their own dead to leave it and to go and weep over their neighbor’s dead. To die to one’s neighbor is this, to bear one’s own faults and to be unconcerned about every person, that this one is good and that one is bad.”

Moses died with six other monks peacefully protecting the monastery from invaders. His pleas for conversion went unheeded. When he died a witness reported seeing a crown from heaven descend upon him. His body is honored at the Virgin Mary's Coptic Orthodox Monastery of El-Baramous in Egypt. 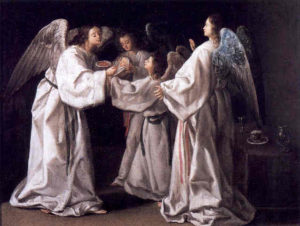 As was recounted in Round One, Raymond Nonnatus was so named because of the traumatic circumstances surrounding his birth. According to legend, his father, a local count, used a sword to perform a rudimentary caesarean section on his mother, who had already died thus rendering him “not-born.”

Raymond spent his earthly ministry among an order of monks who took a special vow to ransom enslaved people. While in Tunis, trading himself for some 28 slaves, Raymond ran afoul of the city authorities, who took a serious dislike to his preaching. They bored a hot poker through his lips and padlocked his mouth shut. For this reason, Raymond is invoked not only by mothers in labor, but also by priests trying to preserve the seal of the confessional, and those wishing to stop harmful gossip.

There is also a legend that Raymond had been made a cardinal when he died, and so was on his way to Rome for the ceremony. For this reason, he is often depicted in a cardinal’s outfit, in red and white robes, complete with his mouth locked shut. While selecting a cardinal who cannot speak does seem like an excellent pick, it also seems like this tradition conflates Raymond with someone else. Poor Raymond died without ever being a cardinal.

Along with being the patron saint of a popular English costume drama, devotion to Raymond Nonnatus is especially widespread in Latin America. Because of Spanish colonization, massive festivals to the saint are found all over the Spanish-speaking world, with their own unique contributions. In Costa Rica, the festival includes a three-hour long parade of oxen and cowboys -- presumably to commemorate the blind ox that carried the saint’s body, and his early life as a farmhand. The high point of the festival is when 30 other statues of San Ramon are processed in from around the country to have a saintly family reunion.

Raymond’s padlock has also given rise to another ritual, which has taken off at the cathedral in Mexico City. If you want to stop a particularly slanderous rumor about yourself, you go to an altar of Raymond Nonnatus, place a padlock upon it, and place the key to the padlock in the saint’s piggy bank, so the mouth of the slanderer is forever in the saint’s control. Then seat yourself in full view of the congregation, so everyone can gaze upon your spotless conscience, and feel properly chastened! Writing a plea to the saint and placing it on the padlock is also popular.

Moses the Black vs. Raymond Nonnatus

147 comments on “Moses the Black vs. Raymond Nonnatus”