Odo of Cluny vs. Mechtild of Magdeburg

We continue our march through the Saintly Sixteen this week as Lent Madness rolls on! In this round of Quirks and Quotes we'll continue to get to know our merry band of saintly souls in ever deeper ways. Don't forget, you can always return to the first round to refresh your memory of the basic bios by clicking the Bracket Tab.

Today it's Odo of Cluny taking on Mechtild of Magdeburg. To get here, Odo snuck past Theodore the Studite while Mechtild trounced Isaac the Syrian. Also, if you're in the market for a baby name, or need to suggest one to your daughter-in-law, we think "Odo" or "Mechtild" will soon wind up on the most popular list. Get ahead of the curve!

Whoever wins today will join Stephen and Florence Nightingale (who made it past Henry Beard Delany on Friday 53% to 47%) in the Elate Eight. Onward! 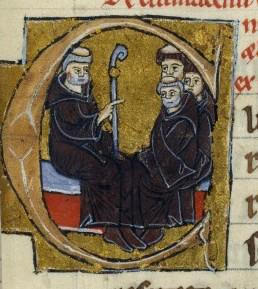 Odo of Cluny, renowned for his reformation of the monasteries, was a man of deep prayer himself, and often spent days in dedicated prayer, especially at the Tomb of St. Martin. Like St. Francis, Golden Halo Winner in 2015, Odo encountered humans and animals intent on disrupting his prayer life. The animals proved much easier to deal with.

“From the sides of the road the foxes came out, at first following behind and watching him, and then throwing themselves in his way. But when they saw that they could not turn the eager youth from the straight path that he was pursuing, snarling and rushing at him with gaping mouths, they threatened to seize him by the throat. He neither fled nor resisted, but with legs together and shoulders hunched defended himself only with his shoulders and arms…[and] he guarded only his throat from their mortal wounds. Then suddenly a wolf came running swiftly and freed him from their attacks, and from thenceforth showed itself tame and acted as his companion.”

John of Salerno, the writer of this account argues if we find this difficult to believe, we should remember the life of St. Paul, whose grave was prepared by lions; blessed Ammon, whose monastic cell was guarded by dragons; or Florentius, who convinced a bear to guard his lambs. So Odo having a wolf as a prayer companion is not odd. At all.

During meals, the monks would read. When the reading ended, the meal was done and the monks were to resume their daily duties of prayer. Odo, after eating, would gather up the crumbs that had fallen from his plate, not wanting any food to be wasted. The abbot ended the reading with Odo holding a handful of crumbs. “He did not know what to do, for when the reading stopped he did not dare to death them, nor yet to leave them lest they should be lost. He therefore closed his hand on them thinking it would be best to keep them to offer to the abbot.” When they left their post-meal chapel, Odo prostrated himself at the abbot’s feet to offer the little pile of crumbs. But on opening his hand, Odo discovered the crumbs had transformed into a heap of pearls. The community was amazed and we read they immediately used the pearls to decorate a chalice.

Odo is also the inventor (or one of them) of attributing letters of the alphabet to musical notes. He’s also credited with identifying the note b-flat. Several hymns composed and attributed to Odo survive. A visitor to Cluny heralded the monks as a choir whose chants were dazzling prayers for the salvation of all souls. One of his hymns, composed for the Feast Day of Mary Magdalene, captures the dazzling love of an encounter with Christ: 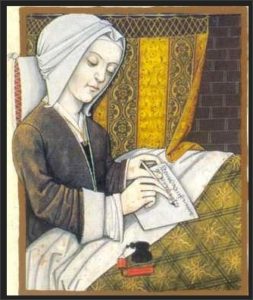 Mechthild of Magdeburg received her first Holy Spirit vision at the age of twelve. Was this a quirk or something normal in the thirteenth century? It’s hard to know and evidence of other quirky behaviors is long lost to history.

As an educated young woman she shared her visions through her writings:

“The love of God has moved my pen,
My book is not from the mind of men.”

She wrote on loose pages she believed were a gift from God. Friar Henry of Halle collected her writings dividing them into a series of books called The Flowing Light of the Godhead.

As her works were collected she said, “I was warned by some that my book might give much offence, and that it would be burnt as evil teaching. And I turned to my Beloved, as was my wont, and said to Him that if it were so, He had Himself misled me, for it was He who commanded me to write it. Then did He reveal Himself to my sorrowful heart, as if He held the book in His right hand, and said, ‘My beloved one, do not be sorrowful. The truth can be burnt by no man. He who would take it out of My Hand must be stronger than I.”

Mechthilde wrote in flowery Middle Low German; unusual since most wisdom literature during this period was written in Latin. She noted “of Latin I know nothing… And now, Lord, I will commend these writings to Thy tender mercy; and with a heart that sighs, and with eyes that weep, and with a downcast spirit, I pray that they never may be read by a Pharisee, and I pray also that Thy children may so receive them into their hearts, as Thou, O Lord, hast of Thy truth given out of Thy store to me.”

Like most members of the Beguine community where she lived, her time was spent tending those in need. She wrote of caring for the sick “to comfort them with the lovely words of God, and to refresh them also in a gentle way with earthly things, for God is very rich. It is needful also to bestow much care on the cleanliness of the sick-room, and it is a good thing to be merry and to laugh with them, but in a godly manner.”

While she was dedicated to serving others, her most joyful time was spent in prayer, “Prayer has a marvelous power, it makes the bitter heart sweet, and the sorrowful heart glad, and the  poor rich, and the foolish wise, and the fearful bold, and the sick strong, and the blind to see, and the cold to burn.”

Odo of Cluny vs. Mechtild of Magdeburg

170 comments on “Odo of Cluny vs. Mechtild of Magdeburg”