Much to the relief of the entire Lent Madness global public, the Supreme Executive Committee has reconciled -- temporarily -- which means the Saintly Smackdown will proceed after Saturday's all-t00-real April 1st scare. Yes, there WILL BE a 2017 Golden Halo winner.

So let's get back to the holy business of saintly competition! Today, we continue with the final matchup of the Saintly Sixteen as Amelia Bloomer faces Fanny Crosby. To get to this round, Amelia dispatched Philipp Melanchthon while Fanny got the best of G.F. Handel. The winner will join seven other saintly souls to make up the Elate Eight. Who will Amelia or Fanny be joining? Just to refresh your memory, that would be Stephen, Augustine of Canterbury, Franz Jaggerstatter, Mechtild of Magdeburg, Raymond Nonnatus, Martin Luther, and Florence Nightingale. One of this group will, soon enough, be crowned in (extra special) glory. 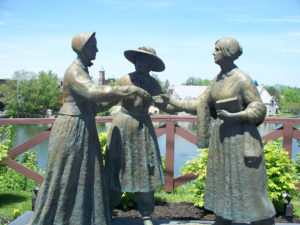 Amelia is remembered in the church as a woman who saw women as equal and valued members of the body of Christ. She worked tirelessly in her life to invite the Church and the State to recognize the dignity of women. She was a journalist, voting rights advocate, and temperance leader, among her many roles.

Amelia Bloomer began her prophetic ministry in the temperance movement. She saw the results of alcohol consumption -- violence, men squandering their pay on alcohol instead of food, and health issues. She wanted it eradicated from all aspects of society, including food. She responded to criticism made by a prominent wife of an elected official that one could not bake holiday treats without the addition of brandy, saying, “That lady must be a wretched cook indeed who cannot make apple dumplings, mince pie, or cake palatable without the addition of poisonous substances.”

She advocated for less-restricting fashions for women, seeing the style of the day as oppressive and damaging. When criticized by men for advocating for women wearing the style of pants that would bear her name, bloomers, she quipped, “Let men be compelled to wear our dress for awhile and we should soon hear them advocating a change.”

Amelia worked tirelessly for suffrage, and she pushed for the right of women to hold elected offices. Her mind and wit, quick and sharp, frequently pointed out the absurdities of the arguments for the continued disempowerment of women in government. Women, argued the majority of elected male leaders of the day, were created to submit to laws, not to make them. She countered, “It will not do to say that it is out of woman's sphere to assist in making laws, for if that were so, then it should be also out of her sphere to submit to them.”

She added, to the clergy who argued gender discrimination was God’s holy will, “Man represents us, legislates for us, and now holds himself accountable for us! How kind in him, and what a weight is lifted from us! We shall no longer be answerable to the laws of God or man, no longer be subject to punishment for breaking them.”

In her newspaper The Lily, Amelia created a forum addressing serious issues concerning women, and gave them a voice. Bloomer said of her paper, ”It is woman that speaks through The Lily. It is upon an important subject, too, that she comes before the public to be heard.”

The forum she gave to women to speak, to be heard, and to be empowered continues to nurture all who demand dignity. Her words still ring true, and still challenge us. 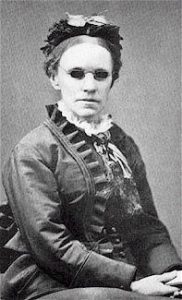 Fanny Crosby is easily given the appellations of “mother of modern American congregational singing” and “Queen of Gospel Song Writers.” Her more than eight thousand hymn texts of the late 19th and early 20th centuries make her among the most prolific hymn writers of all time. More remarkable than her myriad compositions is that she wrote all of her hymns while blind.

Far from seeing her blindness as a burden and affliction, Crosby noted that “it seemed intended by the blessed providence of God that I should be blind all my life, and I thank him for the dispensation. If perfect earthly sight were offered me tomorrow, I would not accept it. I might not have sung hymns to the praise of God if I had been distracted by the beautiful and interesting things about me." Indeed, her faithfulness required no sight: “if I had a choice,” she said, “I would still choose to remain blind… for when I die, the first face I will ever see will be the face of my blessed savior.”

Hymn-writing for Crosby wasn’t a matter of making money, or earning a living. She noted that she always began her work in prayer: “I never undertake a hymn without first asking the good Lord to be my inspiration.” Evidently the work of working and re-working lyrics didn’t burden Crosby, either. “It is not enough to have song on your lips,” she said, “you must also have a song in your heart.” Crosby’s prayerfulness was not without practicality, though – and while her hymns have often been criticized for being overly sentimental, one can’t deny the honesty she brought to her own life of prayer: “God will answer you prayers better than you think,” she wrote. “Of course, one will not always get exactly what he has asked for....We all have sorrows and disappointments, but one must never forget that, if commended to God, they will issue in good....His own solution is far better than any we could conceive.”

But of the words all the words Fanny Crosby may have written, it is her hymns that have stirred the hearts of millions of Christians in the United States and around the world. Her best known hymn, “Blessed Assurance,” speaks of the promise found in following Jesus:

Blessed assurance, Jesus is mine;
Oh, what a foretaste of glory divine!
Heir of salvation, purchase of God,
Born of His Spirit, washed in His blood.

Perfect submission, all is at rest,
I in my Savior am happy and blest;
Watching and waiting, looking above,
Filled with His goodness, lost in His love.

Amelia Bloomer: The image is from the National Park Service. Here’s the tag - in May 1851 Amelia Bloomer introduced Susan B. Anthony to Elizabeth Cady Stanton as depicted in the life-sized bronze figures sculpted by Ted Aub. In "When Anthony Met Stanton" as in real-life, Bloomer and Stanton are wearing the "Bloomer Costume" which bloomer publicized in "The Lily."