Who will face Franz Jägerstätter in the Championship Round of Lent Madness 2017? That's the question of the day following Franz's narrow victory over Stephen 53% to 47% in the first of two Faithful Four matchups.

Two things are certain: 1) Franz's opponent will either be Amelia Bloomer or Florence Nightingale. 2) Today's Celebrity Bloggers, Laurie Brock and Anna Courie, are terrific writers and we're grateful for their witness.

To make it to the Faithful Four, Amelia Bloomer stymied Philipp Melanchthon, Fanny Crosby, and Raymond Nonnatus while Florence Nightingale made it past Anselm of Canterbury, Henry Beard Delany, and Martin Luther.

In case you missed the final in-season Monday Madness episode of 2017, watch it here. Tim and Scott are not BOTH in the Holy Land for Holy Week, but one of them is. And it's definitely not Tim. Because he's busy. 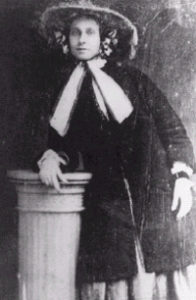 Imagine a world - or a church - without women’s voices.

Amelia Bloomer didn’t have to struggle very hard to imagine. In the 19th century in which she lived, women in the United States were silenced by culture, by law, and by religion. Amelia, however, was not willing to allow others to silence the voice God gave her.

Amelia began using her voice as a leader in the temperance movement, a movement in America that, seen through our own 21st century experiences, can seem extreme. Amelia and those who advocated for temperance wanted alcohol sales banned. Amelia herself would not dine in a home where alcohol was served. Amelia had seen, in a country where women had little if no opportunity to work outside the home, her gender dependent upon wages brought home by husbands, the same wages readily spent at pubs and bars where pay was distributed. Cities and towns encouraged establishments to sell alcohol while spending no money on public wells for clean water. Amelia has heard the voices of women abused and neglected because of alcoholism.

Amelia used her voice to lift up other women. She published The Lily, a newspaper devoted to women’s issues. Its early articles focused on temperance, but as Amelia listened to the voices of other women leaders, including Elizabeth Cady Stanton, The Lily addressed a range of issues, from fashions that allowed better mobility for women to voting rights. Amelia said of her newspaper, “It is woman that speaks through The Lily. It is upon an important subject, too, that she comes before the public to be heard.”

In reading biographies of Amelia, we likely wouldn’t know how the voice of God guided Amelia. She rarely wrote about the influence her Episcopal faith had on her viewpoints or even how her faith molded them. She was, however, a devout member of the Episcopal Church in Seneca Falls and frequently clashed with other women’s rights advocates for her unwillingness to condemn the Church outright, arguing she preferred to reform the Church from the inside as a member.

Throughout her life, Amelia was involved in a vast array of charitable and church organizations. She had sewing parties to make clothes for those in

need. She and her husband welcomed several orphans into their home, worked for church ministries, and continued her dedication to temperance, often lecturing inebriated men on the street of the dangers of alcoholism and offering them help.

What would the world and the church be like without women’s voices?

Thanks to the work of women like Amelia Bloomer and those who continue her work to strive for justice, dignity, and equality for women in the church and the world, may a reality without women’s voices never be. 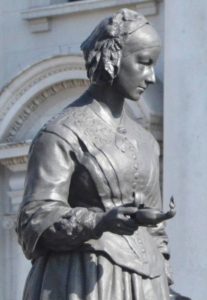 Florence is tired. And cold. So bitterly, bitterly cold. She pulls her cape around her more tightly with her left arm as her right arm lifts the lamp that lights her way to the infirmary. Florence is lost in her thoughts. She has wondered, yet again, how she can help so many soldiers. They are all so sick. The pain and anguish of their plight sits heavy on her heart. In moments of doubt, she wonders how God can be found on a battlefield…..

Her boot sticks once again in the mud on her way. She is irritated by the inconvenience. Will the weather not even bend to help her improve conditions?

She sighs as she lifts her shoe and shakes off the debris. Tonight will be difficult. A new load of wounded has been delivered to the hospital and Florence knows it will be a long night as walks between the wounded, and teaches the young nurses to wash, wash, wash. Florence wonders how hand washing can be such a foreign concept. She wonders why fresh air, clean hands, and clean linens would be such a revolutionary idea to taking care of their fellow man. She wonders how to teach people the basic necessities of life that should be available to all. She wonders if her fellow doctors and nurses see the face of God in their patients as she does. Florence wonders how to make them see beyond the lumps of misery on their cots.

Florence takes a deep breath as she opens the doors to the ward. She knows from experience that the stench of death, decay, rotting flesh, old (and new) blood will steal her breath and make her stomach heave. Even an old nurse will never forget that unique sickly-sweet smell of skin that is no longer healthy. The skin that seems to turn first bright pink, then green, and finally black as it rots before their eyes. She is frustrated that the hospital does nothing to address the vermin that are attracted to death. She knows that it is vital to the repair of the body that those broken cells be nurtured in an environment that is clean both in air, surroundings, and supplies. Florence knows that in a room that is overflowing with with the sick and wounded, the environment is often the largest hill in her b 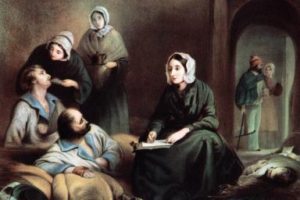 As Florence proceeds, she sees John* lying next to the door. Florence turns to her first patient of the night, smiles, and shares a little of God in that singular moment with her patient, and says, “‘To be a fellow worker with God is the highest aspiration of which we can conceive man capable.’ Come, let’s get you well.”

*John represents one of many patients Florence served and is not to be confused with a specific individual. The writing here is the creative license of the author to best represent the times and environment in which Florence worked. Any errors are my own.