With John the Evangelist squeezing past Phoebe 52% to 48%, in a tighter race than predicted by most penitential pundits, the first battle of the Saintly Sixteen is set. John will face Peter in a matchup of Biblical titans.

Today, Mary of Egypt faces Richard Hooker as the 3rd century touches up against the 16th. Impossible to compare these two saintly souls, you cry? This is madness, you declare? Of course it is! Lent Madness! Also, just wait...

In the meantime, we wanted to take a moment to again thank all eleven of our 2018 Celebrity Bloggers. Not all of them have yet had a saint thrust into the glare of the Lent Dome in these early days of Lent. But if you're wondering just who they all are, click on the Celebrity Bloggers tab. 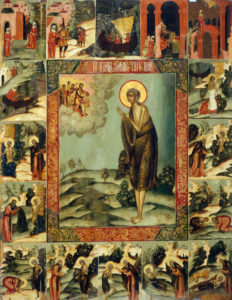 Mary of Egypt is unique among female saints. She is not described as young or beautiful. She is not wealthy or educated, and she does not have important connections. She is not martyred, and she is not a virgin. She does not reject her family. Instead of finding a male mentor or teacher, Mary teaches a famously pious monk about true humility.

Mary was born in Egypt in the third century before moving to Alexandria at the tender age of twelve. The earliest accounts of her life report that she was a prostitute. Some time later, she heard of a pilgrimage to Jerusalem to venerate the cross. She sailed for Jerusalem, using her body as payment for the journey. Upon arriving at the church, a powerful force would not let her enter. She realized that her sins prevented entry. She repented, and the Virgin Mary appeared and forgave her. In that moment, Mary of Egypt renounced the world.

Legend has it that while at the church, Mary was given three coins with which she purchased three loaves of bread. She took those loaves across the Jordan River and lived off them for forty-seven years until the monk Zosimus found her. When he happened upon her, she was naked, her body blackened and burned by the sun. She had not had the eucharist in all her time in the desert so she asked Zosimus to return the following Easter with communion.

The next year, Zosimus returned to the Jordan but did not find her. He went to the place where they first met and found her body. Written in the sand was a request to bury her. Zosimus tried but could not dig in the hard ground. A gentle lion then approached, and Zosimus asked the lion to help dig a suitable grave. The lion complied, and Zosimus buried Mary—and then returned to his monastery, glorifying God.

Collect for Mary of Egypt
O God, by whose grace your servant Mary of Egypt, kindled with the flame of your love, became a burning and a shining light in your Church: Grant that we also may be aflame with the spirit of love and discipline, and walk before you as children of light; through Jesus Christ our Lord, who lives and reigns with you, in the unity of the Holy Spirit, one God, now and for ever. Amen. 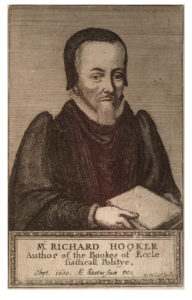 Presbyterians have John Calvin. Lutherans have Martin Luther. Methodists have John Wesley. For Anglicans, the name is Richard Hooker. One of the most influential Anglican thinkers, Richard is credited with creating the theological foundation of scripture, tradition, and reason. His approach to theology has traditionally been regarded as the beginning of the Anglican via media (or middle way) between Roman Catholicism and Protestantism.

Born in 1553/54 near Exeter, England, Richard became a fellow at Corpus Christi College in Oxford in 1577 and was ordained a priest two years later. After a few years serving as a tutor and a preacher, Richard became Master of the Temple Church in London, a prominent pulpit at the time. He later served churches in Boscombe, Salisbury, and Bishopsbourne.

When a controversy erupted with the Puritans, Richard published his magnum opus, Laws of Ecclesiastical Polity. The book offered a critique of Puritanism and a defense of the Church of England and The Book of Common Prayer. In his book, Richard articulated seven forms of law—from eternal law to ecclesiastical law. He pointed out that minor theological disagreements were adiáfora—a thing indifferent—to God. What was more important to Richard was the piety of the person or people involved.

Richard’s treatises continue to be foundational to Anglican thought today, and his works are credited with influencing not only theology but also political theory and English prose.

He died on November 3, 1600, while serving as rector of a parish near Canterbury. He is buried in the chancel of Saint Mary the Virgin, Bishopsbourne, and his feast day is celebrated on November 3.

Collect for Richard Hooker
O God of truth and peace, you raised up your servant Richard Hooker in a day of bitter controversy to defend with sound reasoning and great charity the catholic and reformed religion: Grant that we may maintain that middle way, not as a compromise for the sake of peace, but as a comprehension for the sake of truth; through Jesus Christ our Lord, who lives and reigns with you and the Holy Spirit, one God, for ever and ever. Amen.

254 comments on “Mary of Egypt vs. Richard Hooker”