Don’t forget, you can always go to the Bracket Tab to easily find previous battles if you need to refresh your basic knowledge on these saints. This is yet another free courtesy extended to you, the Lent Madness Global Public.

In yesterday's Battle of the Bands, Catherine Winkworth made Isaac Watts sing the blues 56% to 44%. She'll go on to face Eglantyne Jebb in the Saintly Sixteen.

But that's all in the past. Today we kick things off with a battle between two Biblical heavyweights, Peter and John the Evangelist. At stake? The Elate Eight. 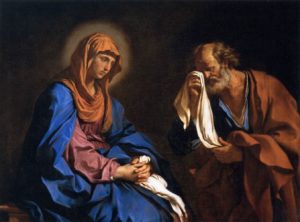 You may know the biblical accounts of St. Peter, but have you heard he was a renowned weeper? Tradition tells us he always wore a towel at his chest to wipe the tears from his face. He was prone to cry when he remembered the voice of Jesus, and he always prayed whenever he heard a cock crow -- a reminder of how he denied knowing Jesus -- and wept some more.

Many miracles were attributed to the penitent Peter. One day, his disciple George died while on a preaching mission. When St. Peter’s staff was laid on his corpse after forty days dead, George came back to life.

As a powerful witness for the Gospel, Peter found himself with an archnemesis, the sorcerer Simon, who aspired to be worshipped as a god through his feats of witchcraft. They first battled wits in Jerusalem, then Peter followed Simon, who ran off to Rome and befriended the nefarious Nero. Along with St. Paul, Peter found Simon in Nero’s court and exposed his sorcery as diabolical. Simon ordered his angels to attack Peter, and Peter replied, “I fear not thine angels, rather do they fear me.” Nero was shocked that Peter did not fear the sorcerer and agreed to provide him with a loaf of bread in secret. The sorcerer demanded Peter show he could read his mind, and Peter said he would do so by thwarting Simon’s schemes. Simon summoned snarling dogs to attack Peter, and Peter fed them the bread he’d secreted from Nero, thus demonstrating he’d known Simon’s plan all along.

Finally, angels of Satan held the sorcerer aloft, and Peter commanded them in the name of Jesus to drop the evil man. Simon was killed. For the loss of his magician, Nero arrested Peter and Paul. In prison, they converted their guards, who then set them free. As they fled the city, Jesus appeared to them and said, “I go to Rome, to be crucified anew!” So they followed him back to Rome. Famously, Peter asked to be crucified upside down. “Lord, I have desired to follow Thee, but I did not wish to be crucified upright. Thou alone art upright and high.”

Paul was also martyred that day, and later the disciple Dionysius saw the two great apostles holding hands and re-entering the city gate, “dressed in shining garments, crowned with light and glory.” Surely it was the holy city they entered, the new Jerusalem, where Christ would wipe every tear from Peter’s eyes, where there is no more death or mourning or crying or pain, for the old order of things has passed away and Christ has made all things new. 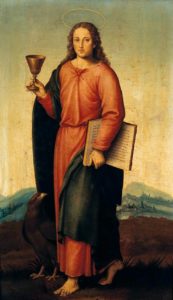 What more can be said about Blessed John than to you I have hath said? Apparently, a lot. In round one, we uncovered the startling truth that the man we know as John the Evangelist is probably a mash-up of at least a few New Testament Johns (something like a Gospel version of the Megazord from Power Rangers – it’s morphing time!) To know more about John, we need to immerse ourselves in his parts.

John the Apostle, along with his brother James, was called by our Lord to leave their nets to follow him. While the call to follow Christ must have been compelling, one must sympathize with Zebedee when, in the middle of hauling in the fish, his two sons simply walk away. He is included, along with Peter and James, as the inner circle of Jesus’ inner circle, witnessing both the Transfiguration and our Lord’s anguish in the Garden of Gethsemane.

Curiously enough, the Gospel that bears his name – the Gospel According to Saint John – does not include the story of the Transfiguration. What it does include from the very beginning is a Christ who seems to enter the world already Transfigured. “In him was life,” records the Evangelist, “and the life was the light of all people. The light shines in the darkness, and the darkness did not overcome it.” From this narrative, it is possible to draw a lesson that the Gospel of John goes to great lengths to explore – that Jesus is the light from the very beginning, it just takes us a very long time to figure that out.

After Jesus’ Resurrection and Ascension, John asserts a great deal of leadership in the early church. For example, when the mission to Samaria resulted in converts to the faith, John goes with Peter to Samaria to lay hands on the neophytes so that “they might receive the Holy Spirit.”

After this, John fades from history into the realm of legend. If John the Apostle is John the Divine/Revelator, then it is widely held that he died in exile on Patmos. This is complicated because Polycrates and Iraneus, both 2nd century bishops, claim that John was martyred in Ephesus. To add to the complexity, third-century-Ephesus couldn’t even decide where in Ephesus the Evangelist was buried with two sites vying for shrine status. Another legend suggest the Apostle avoided martyrdom by miraculously emerging from a cauldron of boiling oil unscathed. And in later versions of the apocryphal Acts of John, the Apostle doesn’t die at all, but ascends to Heaven like Enoch and Elijah. A fitting and fanciful (albeit heretical) end for our Apostle/Evangelist/Seer/Divine.

168 comments on “Peter vs. John the Evangelist”