Gobnait vs. Paula of Rome

In yesterday's Saintly Sixteen pairing, Pandita Ramabai trounced Marguerite d'Youville 62% to 38% to advance to the Elate Eight vs. William Wilberforce. And, yes, Pandita, much like the Grinch, stole Lent from all the d'Yous down in d'Youville.

Today's battle features Gobnait vs. Paula of Rome for a chance to square off against Ignatius of Loyola in the Elate Eight. While you may think there is scant evidence about the lives of either of these saints, you can always check back to their earlier matchups to help fill in the gaps. Gobnait defeated Hrotsvitha and Paula of Rome bested Marcella of Rome.

This also marks the final matchup of another wild and wacky week of loony Lenten learning. We'll be back first thing Monday morning for the final battle of the Elate Eight as Zenaida faces Nicholas as Myra. Then it's on to the next round! 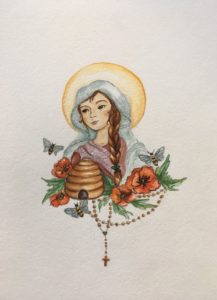 As the female leader of a convent and a community in medieval Ireland, there are not any writings or quotes preserved from Gobnait. However, this line from John Chrysostom sums up well her devotion to our honey gathering friends.

Gobnait’s name is often anglicized as “Deborah” – a name which means “honey bee.” And this is no accident. She is best remembered for her work raising bees at the convent she helped to establish.

And then there were the times she organized the bees to the defense of her community. For example, the cattle rustlers who were strongly encouraged to leave the area by a swarm of Gobnait’s bees. In some of these legends, the bees were transformed into soldiers to provide safety and security for the community.

According to Celtic tradition, when the soul departs from the physical body it departs as either a bee or a butterfly. Gobnait stayed in Ballyvourney until she died – it was the place where God had given her a sign to “wait for her resurrection.” The bees she worked with remaining as a sign of God’s promise. 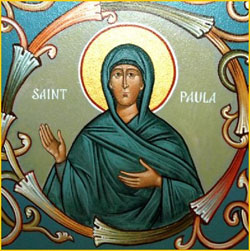 Paula of Rome was born into a family of distinction, and she married well too. She lived a life of luxury, wearing the finest silks and ordering slaves to carry her around the city.

Then, upon the death of her husband and her daughter, Paula’s life changed. She went on a pilgrimage and began to give all of her riches to the poor. People became nervous and considered her generosity reckless. Then Paula became friends with St. Jerome. She left her children, moved to the desert, and took her asceticism very seriously. Maybe even too seriously. After all of these years, we know about Paula’s great generosity to the poor. We remember that she founded a monastery and three convents. And, we also have the enduring knowledge that Paula of Rome…didn’t bathe.

The fact (and the smell) seemed to frustrate those working with her. Evidently, Jerome tried to get her to take a bath, and the Sisters would give her severe looks. But Paula would simply reply, “A clean body and a clean dress mean an unclean soul.”

Though John Wesley’s quote, “Cleanliness is next to godliness,” gets a lot more attention among Christians, Paula of Rome may have had a point. At least, St. Jerome may have come around to her thinking. When he reflected on her life, he said, “The more she cast herself down, the more she was lifted up by Christ. She was hidden and yet she was not hidden. By shunning glory, she earned glory, for glory follows virtue as its shadow; and deserting those who seek it, it seeks those who despise it.”

Gobnait vs. Paula of Rome